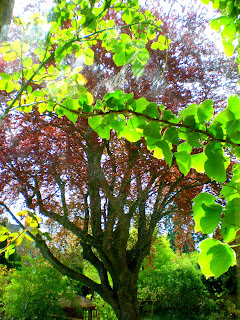 Better get a move on, as the seasons change and summer hits us this weekend. And so, since Maidie and Minnie seem to like the tree shots here, back to early May blooming in Oxford, albeit against the backdrop of a biting wind. The copper beech in youthful leaf can be seen from the windows of friend Hen's parents' house in Norham Road, part of that Victorian estate so robustly planned and exuberantly if somewhat pompously executed over decades. The University Parks are nearby, and usually we excurt around them in the spring, but as we opened the front door a gust and a downpour greeted us, so we promptly shut it and curled up with our books.

Great joy of the university gardens, it seems - though I remember New College in midsummer with great fondness - is the extensive reach of Worcester College's back yard. Planted in 1832, it still has a few robust, disease-resistant Princeton Elms on the lawn, of which I'm told this is one, though it looked more like a London Plane to me. 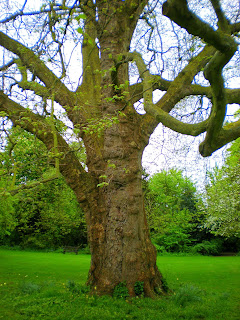 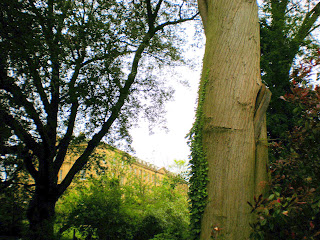 but I do know my Dicksonias when I see them, those handsome tree-ferns which populated New Zealand and Derreen. 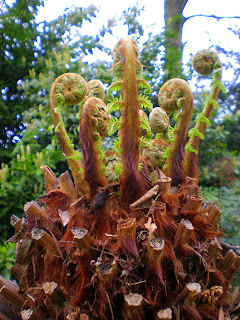 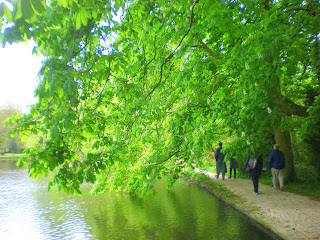 and another taken from Turl Street between Jesus and Exeter (now, by the way, is real prime flower time for the noble chestnut): 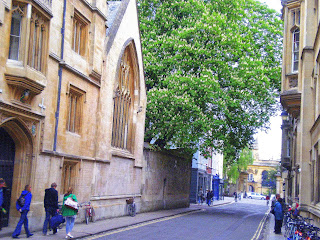 Magnolias all have lost their flowers now, but here's a last spurt for one in Worcester 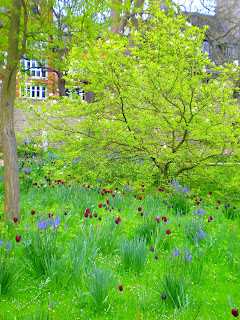 and another just outside St Mary's 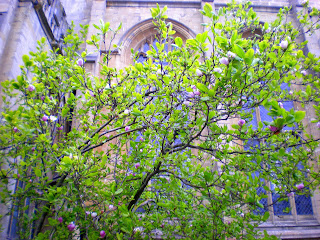 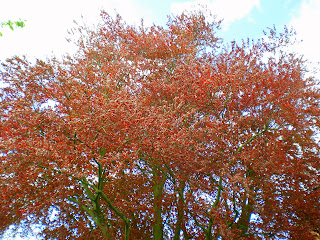 to compare with another a couple of weeks later in Kensington Gardens. 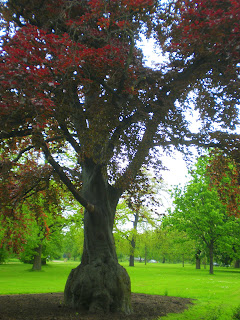 Finally, nature's permanence in ancient Oxford: my thanks to Rev Carl for pre-empting where I've reached in Gaudy Night - pure enchantment, by the way, with a dash of malice and hysteria thrown in - and quoting his favourite Wimsey line: 'How fleeting are all human passions compared with the massive continuity of ducks'. Though this one seems to have had her continuity much reduced to the mere power of one. 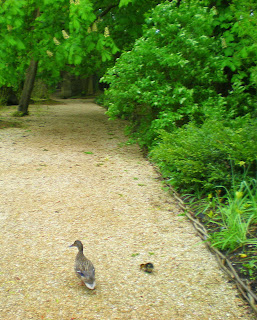 This just reminded J of the fabulous beetle board at the Oxford Museum of Natural History (the one with the unmissable Pitt Rivers Museum at the back), headed by a possibly apocryphal comment by the Oxford-educated geneticist and evolutionary biologist J B S Haldane. When asked by theologists what could be deduced of the creator, he replied that he must have 'an inordinate fondness for beetles'. The board tells us why: 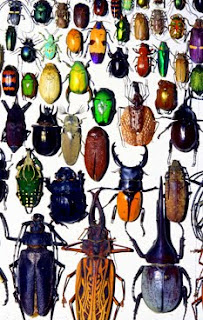 Thank you, David - trees galore: what a feast! Love the horse chestnut. We have a few in the town centre - notably where Vieux-Nice meets Place Garibaldi - which are a nice change from endless planes and oliviers (my last home was surrounded by ancient woodland and I became very spoilt, ahem).
PS Thank you again for the Martinu background info.; it enhanced my enjoyment of the broadcast(6th symphony), and meant I wasn't too confused or surprised by the echoes of Janacek.

Since you noted the chestnut - they're two a penny here, of course - I added the one I'd originally suppressed from the centre of town. Noticed, by the way, that the noble olive is becoming quite a London fixture in our warmer summers.

Excellent photos. The trees are wonderful.

Looking at these trees, one is almost persuaded by the Argument from Design (Cicero, I like him, but most famously Thomas Aquinas, with his five ways to the existence of God)

But so was Darwin when he first saw the tremendous forests of South America, only to see later that they ( and he) were no more than the results of natural selection

But if the response in our hearts is there, does that matter?

And on trees and seasons maybe recall Housmann - The Shropshire Lad

- of my three score years and ten, twenty will not come again:

Would that be a tree-lined Boulevard Ha(o)us(s)mann? Or A E Housman the homosexualist poet?

Anyway, I pedanticise. Do you know I won the Edinburgh Festival Baritone Class 1984 singing that and 'look not in my eyes' in Butterworth's settings? Out of a class of four (including the eminent Mr Lobo Chan who has been rather rude in his comments).

PS - Sir David: I hadn't read your first comment when I responded to the second. Thanks for adding to the stock of different takes on the origin of species.

From Robert McIntosh, architect
Why in God's name do you keep returning to Worcester, surely one of the least interesting colleges, apart from its medieval terrace. Having been born and bred in Oxford, I recommended six others, much more worthy of your attention(StJohn's, Lincoln, Campion Hall, All Souls, Nuffield, the Florey of Queen's), and you didn't bother yourself with any on your most recent visit.
Another rather beautiful gem for you to investigate is the Catholic Dominican college,Blackfriars Hall, right on StGiles, designed and built by the brilliant Doran Webb. Like Sir Edwin Lutyens with the Jesuit Campion Hall, everything down to doors and window handles is designed around a distinctive, unified style. I do respectfully urge you to go wild and explore these other places on your next visit.
Best
Robert McIntosh, architect

Intemperate Mr McIntosh, I have not returned to Worcester College in reality, only in the blog for the trees' sake, having visited it the once and found its gardens incontestably among the finest in Oxford.

All in good time, I'll follow your other recommendations, fear not.

Sir Edwin Lutyens had a daughter Elizabeth, a composer, who set the seven principal propositions of the Tractatus of Wittgenstein in a motet for unaccompagnied voices. When a performance of the motet was introduced on Radio 3 some years ago the propositions were referred to as "metaphysical". True, perhaps, but one could hear Ludwig spinning in his grave

Chapels in universities and schools are often overlofty (Exeter,as mentioned earlier in this blog, Keble, Lancing......). Or, if one has one's eyes on the hereafter, perhaps not.