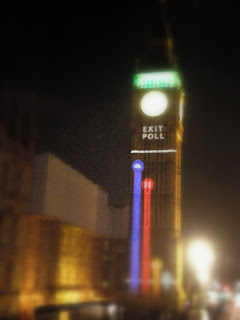 Not exactly what I wanted to see last night as I pedalled over Westminster Bridge on the way back from seeing Henze's Elegy for Young Lovers at the Young Vic. Still, as my godson said many years ago as we flew into Heathrow from Venice in 70mph winds, and passengers were vomiting into whatever they could lay their hands on, 'aren't the lights of London pretty?' And they were last night, if many may well be soon extinguished. Here, for instance, is the rainbow coalition of the Eye and the former County Hall on the other side of the bridge. 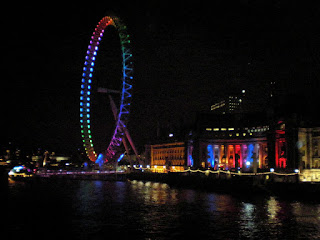 And it could be worse. If only there's still enough money to pay for a show of such staggering brilliance as Fiona Shaw's production of the Henze last night (all production shots are by Sarah Lee for ENO). 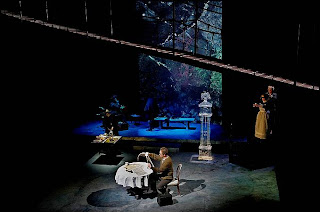 What visual beauty, what ensemble work and, ultimately, what a piece. I hedged my bets after the first act a bit as Henze's customary beauty of scoring - here for a very selective ensemble including mandolin, guitar and musical saw - delivered great sounds but not many ideas that could fix themselves in the mind. But by the devastating final act, there were quite a few that had. It's probably the first time I've been totally hooked by a Henze opera on stage: I do hope to see Der Junge Lord, of which there's a gripping film now on DVD, but Boulevard Solitude gave me a thick head, I can't remember the first thing about The Prince of Homburg and the world premiere of Das Verratene Meer, chiefly remarkable in that it got me to Berlin for the first time in the good old days of The Sunday Correspondent, only upped the tension in the last act. Anyway, this was one to set a good example to Ades and Turnage, both in last night's audience.

And it's surely one of the great opera librettos, by which of course I mean the wonderful structure as well as the text. By 1959 Auden and Kallman had of necessity set aside the rococo poetry of The Rake's Progress in favour of something pithier. If it were just, yawn, a bare symbolic treatment of the creative artist's selfishness, it wouldn't hold us spellbound for as long as it does. But Auden and Kallman make it especially fascinating by the rise and fall of fortunes. In Act 1, psychopathic poet Gregor Mittenhofer is dependent on the visions of widow Hilda Mack, walled up with him in an Austrian mountain inn, who's been waiting over the past 40 years for her husband to return from an expedition on the treacherous Hammerhorn. When his body finally emerges from the glacier, Hilda is transformed from a 20th century Lucia into a pragmatic lady, from fury to Eumenide. Mittenhofer's vampiric instincts transfer themselves to his young mistress Elisabeth's love affair with the son of his physician. It's no spoiler to say that he sends the lovers to their death both out of personal revenge and to fuel his 'Elegy for Young Lovers'.

Bit earnest? Not at all in this vivacious, purposeful production. Shaw gets superb performances from all six singers of her Cosi-like ensemble. I was utterly spellbound by the wonderful Lucy Schaufer as Mittenhofer's harrassed patroness and private secretary, Countess Carolina, who moves from realistic and often very funny stressy hyperactivity to haunted disgust. Here she is at one crux with the young lovers as sung by Kate Valentine and Robert Murray. 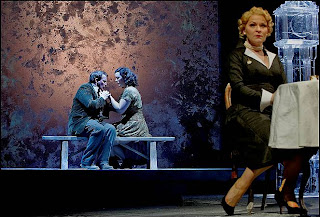 Essentially Schaufer's Lina changes places over the action with the initially pathetic, later hilariously forceful Hilda, a dazzling sing from Jennifer Rhys-Davies who can do the coloratura as well as the lyric-dramatic stuff. I wonder if Shaw intended parallels with screen immortal Marianne Sagebrecht, star of Adlon's Bagdad Cafe? Anyway, here's Rhys-Davies pictured centre with Stephen Kennedy in the speaking role of Alpine guide Josef Mauer. 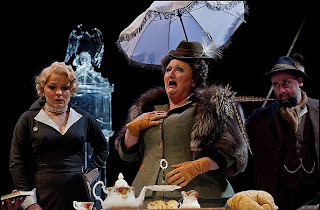 The others come into focus more slowly - in Act Two, it's the turn of the exquisite Kate Valentine as mistress Elisabeth, given a haunting monologue as she's left wondering whether Mittenhofer will bless her departure with her new lover. In Act Three the lover, Robert Murray, also has his moment in a death scene of startling beauty. Auden and Kallman's genius is to have the young lovers imagine that they're an old couple who've been together for 40 years: what children, what affairs, might they have had? 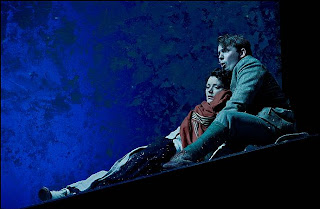 At this point the backdrop of the ever-changing screen at the back of the stage reaches new visionary heights, most of them the creation of video artist Lynette Walworth. Shaw made her operatic debut with the similar visual originality of the Sibelius/Vaughan Williams double-bill at the Coli, and this equals that achievement. 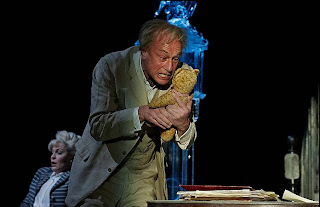 The ending could be corny, but it's not: Henze, Shaw and the singers strike not one emotional false note. Our Fiona is making a bid to be up there for sheer focused energy with Richard Jones, whom she told Ed Seckerson she hugely admires for his 'metatexting'. This cries out to be filmed and recorded; but sadly it's not even to be heard on Radio 3. Do something quick, please, ENO.
Posted by David at 10:41

Your godson sounds splendid - and very much on the right track.
Not a fan of Henze - for similar reasons - but this sounds wonderful, so do hope I shall have a chance to hear it. Fiona Shaw's a clever, talented and highly inventive performer/director, so glad to hear of her involvement in opera. But 'metatexting'? She's lost me already! Well, sort of (used to be a keen supporter & Friend of The Coli & retain sense of loyalty, albeit wistfully & necessarily from a distance).
The 'Sibelius/Vaughan Williams combo @ The Coli' you refer to: did the latter half consist of VW's staging of Synge's short, rarely-performed 'The Riders to the Sea'? If so, wish I'd heard that, too (I love the work).

Oh, that was so long ago, he was such a curious five year old to take around Venice. And I'm very proud of him, because he's equally brilliant at science - which of course I envy - literature and the arts. Has a jazz quintet at his plain old Borders high school and tickled me in his last message by talking about 'a sort of mash up between Benny Goodman and Herbie Hancock'. And then got irate telling me 'I just had a music teacher describe Bruckner as being hit repeatedly in the face with a sharp stick'.

But all this may not be of interest to anyone who doesn't know Alexander.

I think - though I haven't looked - that I linked back to a year and a half ago when I went to the Riders/Luonnotar double bill.

Alexander sounds like the kind of young person we so desperately need in today's world.

Henze is something of a dead issue in this country. The MET has never done any of his operas and while New York City Opera did Young Lord decades and decades ago (wonderfully casting Rudolf Bing in a non-singing role) there's been nothing since. There was a Boulevard Solitude somewhere decades ago, but it's so long ago that the details are gone from my head. Sad situation.

That's shameful about the Met, Will. Mind you, it's not exactly strong box office (though the Young Lord could be in the right hands). As I wrote above, I wasn't exactly crazy about Henze and musically Elegy has some problems, but this totally convinced me that there's genius in it.

Lovely idea/combo - Benny Goodman & Herbie Hancock (I bet those two would have got on really well, not least because both sociable, affable types of keen intelligence). Good for Alexander. Bruckner compared with being ... oh dear. Am huge fan, with 7th & 8th symphonies joint favourites (esp when I feel a need for something reviving).
Thanks for the ref.; I'll look it up, as it might have been the one I heard broadcast.

Bruckner either works totally for me or fails horribly (I was even distracted when my hero Abbado did 8, I think it was, at the Proms). Speedy is best as far as I'm concerned. Alexander loves him, and Sibelius and Tchaikovsky and the Arctic Monkeys. Hence his indignation at the teacher (and what a plonker for making such a meaningless analogy).

Loved that jazz soundtrack on the intriguing little film you posted.

You're right, it's an outrage this wasn't broadcast. I understood Radio 3 didn't like the odd placing of the orchestra in the balcony, and thought that would cause trouble for the broadcast. But they've dealed with worse, so it's not much of an excuse.