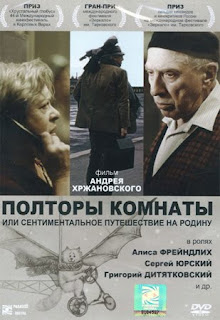 And the ship sails on - to Venice or Petersburg? Is the exiled poet on board going to see his mother and father again, and will they be dead or alive? The cinema of fluid, dream-like images is established right at the start of 70-year old master-animator Andrey Khrzhanovsky's first feature film, A Room and a Half. A free fantasia taking as its starting-point Joseph Brodsky's memoir of childhood, or rather of being the child of two idiosyncratic parents, it's a total masterpiece, a Gesamtkunstwerk as Vladimir Jurowski wrote to me when I asked if he'd seen it, in which image both real and animated, poetry, magnificently-acted drama and music all knit in a perfect 130-minute whole.

As I think I wrote below, I questioned the wisdom of packing in a film on the evening of Noelle's funeral. But this couldn't have chimed better with the reflective mood, and it all came together in an exquisite epilogue where Brodsky sits round the table with his parents and asks them how they died. And then his mother asks how he died, too. I trust that isn't a spoiler, because it's certainly not the point and follows the logic of the film. The senior Brodskys are superlatively well played by Alisa Freyndlikh and Sergey Yursky. Here's Freyndlikh, a hugely respected actress in Russia, with the great man and their interpreter at Monday's Lumiere screening. 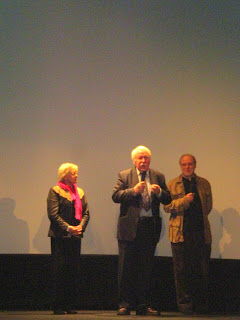 At first you think these two are too old to be the parents of a young boy, but of course that's part of the point: as Brodsky writes in the memoir, 'If my mind gravitates now to their images as old people, it has to do presumably with the knack of memory for retaining last impressions best'. 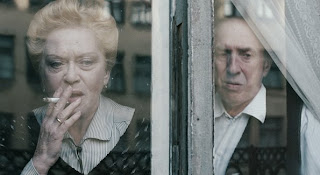 One of the most touching animation sequences is the scene of two crows watching TV; one tenderly wraps a red scarf around the other. 'There are two crows in my backyard here in South Hadley', writes Brodsky. 'They are quite big, almost raven-size, and they are the first thing I see every time I drive to or leave the house. They appeared here one by one: the first, two years ago, when my mother died; the second, last year, right after my father died. Or else that's the way I noticed their presence'. 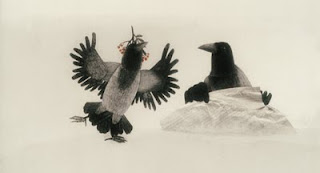 But it's not all elegiac. The way Khrzhanovsky films Brodsky's roistering youth makes the Leningrad students on the rooftops seem like participants in a Paris-set nouvelle vague movie 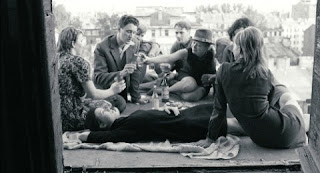 and the scenes where he brings girls back to the 'half' barely partitioned off from the 'room' are witty, too. Above all the flight-sequences, over Petersburg - to which the film is also a lovesong - or Venice 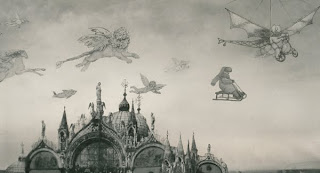 are unforgettable - especially when the Brodskys sell their piano in preparation for the forced Jewish exodus to Siberia, prevented only by Stalin's death, and first the piano and then a whole orchestra flies over the Leningrad rooftops. That sequence is included in the trailer, but it feels completely different due to the musical soundtrack, which in the film is a collage beginning with the funeral procession of Mahler's First Symphony and evolving rather nightmarishly. You'll need to click on the screen again once it starts playing to get the full picture over on YouTube.

Music is vitally important to Khrzhanovsky, and he never strikes a false note in his use of it here. What I really wished I'd seen at the Schnittke Festival was the animated film The Glass Harmonica, heavily censored in the late 1960s and with a wonderful score by the composer. Ah well, we'll catch up some other time. But do see this haunting work of genius while you can: I believe it's still on at the Curzon Mayfair at the time of writing.

Quick newsflashes on other great Russian artists, two of them properly covered over on The Arts Desk: the Minervaesque Elisabeth Leonskaja (born in Georgia to Russian parents, since some have asked) went deep as ever in Schumann's Piano Concerto and a Chopin encore at the Barbican last Saturday; on Wednesday Vadim Rapin stunned alongside Gergiev and the LSO in the new MacMillan Violin Concerto, a work that's here to stay; and before a more trad programme tomorrow (Saturday evening), I'm getting to talk to the great Nikolay Lugansky about Rachmaninov's Rhapsody on a Theme of Paganini, and sounding off my own thoughts on this fascinating piece, too. 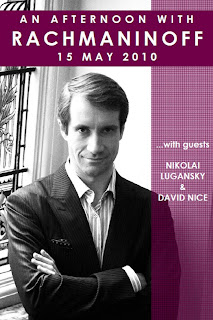 Labels: A Room and a Half, Brodsky, Khrzhanovsky, Lugansky, Philharmonia, St Petersburg

Oh, I've got to see 'A Room and a Half': loved your evocative intro - and the trailer seems to confirm all you said. Looked on rapt at sight of boy's face, looking up at window; then his mother in old age (?death), puffing more and more greedily on her cigarette as if it would help her see her little boy ... beautiful. Loved the images of instruments floating through the air, around the buildings + the crows (sweet without being overly saccharine - they're crows, for heaven's sake!). And the music - for once ('bespoke' film music a particular loathing of mine) = spot-on.
Why isn't it at Cannes (instead of ghastly Robin Hood?!)?
Best for tomorrow's interview.

Only connect - 'bespoke' film music and Rachmaninov: have you seen a truly marvellous little Swiss film called 'Garcon stupide'? It uses reams of less familiar Rachmaninov (ie Isle of the Dead) to complement the melancholy and finally hopeful mood of a confused young gay boy. The last five minutes is all, I think, the slow movement of the First Symphony. Amazing.

Since you are on a Russian tack here, I just received a weekly notice from an American recordings dealer, and their Weekend Specials this week include a Brilliant-Classics reissue of the Prokofiev Symphonies conducted by Maestro Weller, they only costing $14.99 for the lot! Is that a cycle you like, or, since you are a Jarvi enthusiast, and favour him in _No._ _3_ at least, do you take him for all seven?

Tomorrow, as I would venture you know, brings a big Prokofiev/Shostakovich segment on _CD_ _Review_, and maybe I should try to hear some of it if I am not too sleepy, or decide to start on _Patience_, from last Summer's Prom, before going to an air show at Andrews Air Force Base.

Weller, false economy, though some performances (1 and 2 especially) are good; Jarvi, no question. Though I wish the old Rozhdestvenskys would all be reissued.

Unfortunately, haven't seen 'Garçon Stupide' - sounds wonderful, as does the soundtrack. So much of the music accompanying film/documentary is just ... dire; it detracts rather than supports the strictly cinematic elements. And there is already an embarras du choix of beautiful music so readily available - grrr!

Agreed, Minnie - usually in docs I'd rather have nothing. The silly anthropomorphic stuff they play in wildlife films is bad, but worse is the kind of slush that directs your emotions in, for instance, a film about tobacco pickers in Malawi I saw a bit of the other night (had to switch off, not least because the presenter was so nauseating). Fortunately, radio rarely does this.