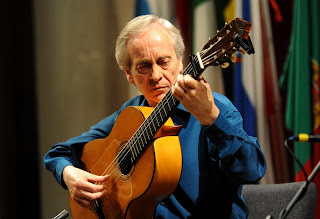 As, we hope, will smug Dave, with a restraining hand on his shoulder from not-to-be-patronised Nick. Anyway, while all that still hung in the balance last Friday, we celebrated the 60th anniversary of the Schuman Declaration at St John's Smith Square with a concert prompted by the Spanish Presidency.

I went along in slightly curmudgeonly mood, disconsolate that we weren't going to get a flamenco dancer and/or singer like the fabulous Ginesa Ortega (whizz down the old entry). I left treading air, along with the rest of a not-so-stuffed-shirt crowd. Veteran flamenco guitarist Paco Pena had assembled a group of real team players - not a support band, but outstanding musicians in their own right. 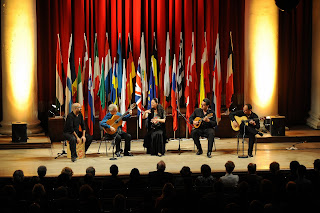 It was a fine enough start, Pena conjuring a whole orchestra with a single guitar in two solos. One by one, the others joined him: second guitarist Rafael Montilla, Charo Espina as the very charming Lady with Castanets, Ricardo Sandoval on bandola and mandolin, and last, by no means least, percussionist Diego Alvarez. Here he is doing winsome things with maracas - who'd have thought - behind Pena and Sandoval. 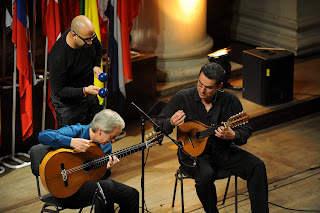 Alvarez's genius had free rein when he turned to the cajon, that thrilling plywood box with vibrating strings. Never heard the like when he did his solo, or adjusted to the slightest change of rhythms in fast numbers - and I'm usually resistant to Bash, Stomp and all that stuff. Met him packing up afterwards and he turns out to be another brilliant product of the Venezuelan sistema that gave us the Simon Bolivar Youth Orchestra and Dudamel. He's part of Pena's much-lauded show Flamenco sin Fronteras which returns to Sadler's Wells in June. I'll be there without fail. I was also fascinated to hear that Pena's next collaboration is with Malian musicians. In the meantime, among the Spanish and Venezuelan numbers last Friday, we had special concessions to the pan-European theme with racy arrangements of Brel, Karas's Third Man theme and two Brahms Hungarian Dances. A superbly planned and paced programme.

Can't resist another 'framed by trees' coda: here's a ceanothus I snapped as I cycled along Ebury Street on my way to the concert 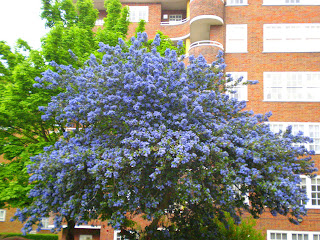 and another flowering wonder - what's it called? like white lilac, but not - outside the Grey Coat Hospital on the way back. 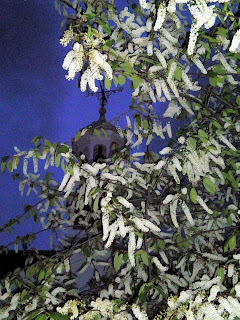 Isn't it amazing how much disinformation circulates about Europe in the UK? Average Frenchperson (and you can add farmers to that, despite what the UK media says) grumbles about its lunacies just as much. And it does commit gross stupidities ... which is why we need to get stuck in, in collaboration with others, and sort things out! The alternative being that old smoke-and-mirrors trick, 'the speshul relatshonship' (aaargh) ...?
Jumping off soapbox to leap with joy at evocative description of Paco Pena + Pals gig. Sounds wonderful! Saw him solo back in Jurassic, and was stunned into silence (no bad thing, & most enjoyable as it turned out).
Terrific accoustic in St John's must have helped effects of percussion. Didn't I read somewhere a couple of years ago post Dudamel & Venezuelan Co's show-stopping perf at proms that sistema-like initiative underway in UK? If so,hope it won't be victim of coming cuts.
Can't help on name of that final flowering tree; sorry.
Bon weekend!

The sistema effect spread first to Scotland, and to be honest I don't know how far it's got in England. Rattle was right to say it's the 'most important thing happening in the musical world today' (and by implication maybe the world in general). I suggested elswhere that it might be difficult to transplant, and that we might look even closer to the Finnish system.

It wasn't just the Prom - there was a week of events at the Southbank with days of rehearsals attended by thousands of schoolchildren. That's the important thing - to get kids to hear what a 100-plus piece orchestra sounds like in the flesh. After that, they may reject it as 'uncool' in their teens, but they can always come back to it. Whereas it's harder to discover what you never knew.

Second para in your response is spot-on. I was one of the lucky ones, taken to concerts/ballet by mother; attending much music-making (+ excellent music teaching) with school. You're absolutely right: it is the grounding that counts. And one so often remembers and returns ...