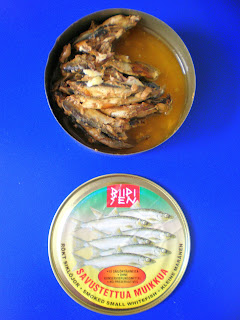 Sibelius, of course, will always be Suomiexport No. 1, but I'm also devoted to the three gifts I brought back from Finland. Tinned muikku (aka lake vendace) is a poor substitute for the fresh fried thing, which I was lucky to eat once again in a Helsinki restaurant: 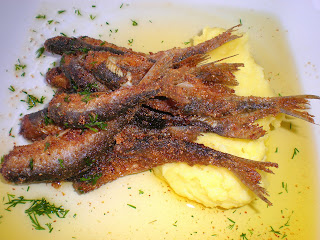 Yet the above smoked miniatures were the best I've tasted in preserved form. Export No. 2 is this box of porridge oats, which made us realise how poor the Quaker stuff is. At the moment we're using an Irish variety, but when I can hie me down to the Finnish church in Rotherhithe, I can buy more of these (and I'm a sucker for the packaging). 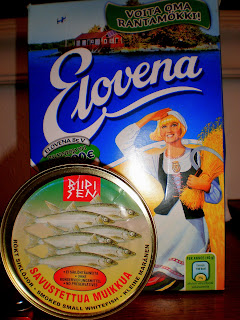 Last but certainly most major is the piikkimatto Anneli marched me down to a hypermarket to buy at half-price on my last morning. It's a kind of fakir's bed of nails - each of the little circles has spikes which dig into bare flesh but fortunately don't make it bleed. 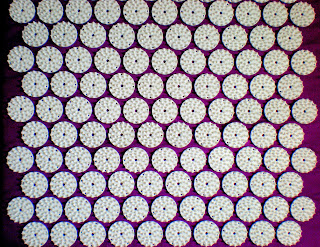 Sounds hideous, but it releases endorphins and also - if this doesn't sound like a contradiction - helps you sleep. It's uncomfortable at first but then a warmth spreads through your back and it's actually quite pleasant, until you rip yourself off it. J was very doubtful about this bizarre present but then he read a little snippet in Metro which touted it as a Reiki mat pioneered by an Englishman who's become some sort of guru and retailing at around £50. Of course the wretched thing probably costs about £3 to make, and mine was put together by slave labour in China, but I was pleased to pick it up for a mere 23 euros. Our alternative-minded blonde bombshell from Jerusalem, Juliette, who's introduced us to all our best holiday destinations including Auroville's Quiet Healing Centre near Pondicherry in south India, adored it when she visited last week. Here she is discreetly draped and blissed out. 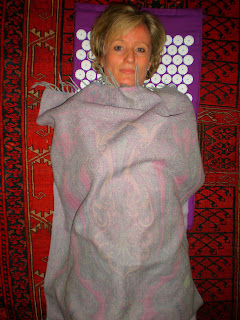 Ah, those oats sound wonderful (agree the ones normally available in the UK are sub-standard; I used to add sultanas to mine to give 'em more flavour/sweetness). The fish: miam-miam! And the ... whaaaat? Spikes? I am intrigued by the question of just how it works (I accept that it does work). How can it be? Anyway, anything that releases endorphins into the bloodstream is A Good Thing for sure!
O/T: loved your latest piece for AD; am delighted to find I'll be able to hear it for myself.

from Robert McIntosh
I must say I think you were being harsh in describing me as "stalking" your daughter Evi; I just like looking at her very attractive appearance in web photos. I also like looking at Mia Farrow in Woody Allen films, for the same reason: am I stalking her then also?
Two modern Oxford colleges which are unmissable and off the tourist track are Nuffield, with Harrison and Barnes' lovely elegant main quad;and St.Catherine's over in East Oxford, quite simply Arne Jacobsen's most successful creation. And don't miss James Stirling's brilliant building for Queens', the Florey.
Robert McIntosh, architect

Either my sense of humour doesn't transmit electronically or yours doesn't work...

And I am always glad to take your advice, so don't go away, please.