As I left Noelle after what turned out to be our last meeting at the end of February and said goodbye to her husband Chris at the edge of Greenwich Park, I was struck by a gnarled old tree (a Spanish chestnut, I think) looking out over London from the top of the hill*. 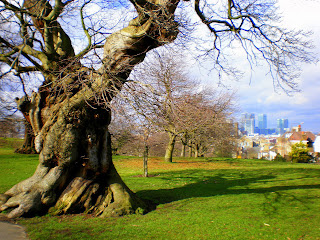 I snapped it without any thought for a telling link. But as I walked up the other side of the park yesterday towards the Church of Our Ladye Star of the Sea for Noelle's funeral service, I couldn't help remembering how bitterly cold, if intermittently bright and promising, it had been on that late winter morning, and how green and lush now on a not quite balmy May day. 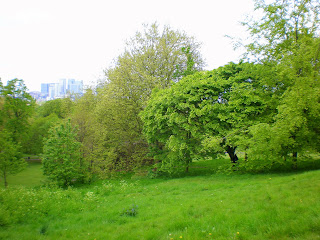 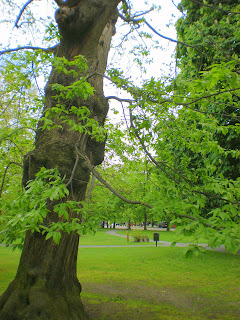 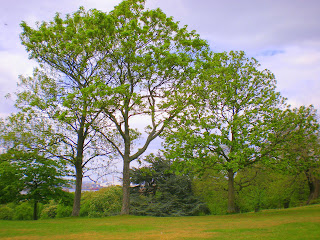 And then I knew what it all reminded me of: Prince Andrey Bolkonsky in Part Three of Tolstoy's War and Peace twice noting an oak on his estate . Here's what the oak tree tells him on his first visit:

'Spring and love and happiness!' this oak seemed to say. 'Are you not weary of the same stupid, meaningless tale? Always the same old delusion! There is no spring, no sun, no happiness! Look at those strangled, lifeless fir-trees, everlastingly the same; and look at me too, sticking out broken excoriated fingers, from my back and my sides, where they grew. Just as they grew; here I stand, and I have no faith in your hopes and illusions'.

And then again in early June, after his visit to the Rostovs at Otradnoye and his first glimpse of Natasha:

The old oak, quite transfigured, spread out a canopy of dark, sappy green, and seemed to swoon and sway in the rays of the evening sun. There was nothing now to be seen of knotted fingers and scars, of old doubts and sorrows. Through the rough, century-old bark, even where there were no twigs, leaves had sprouted, so juicy, so young that it was hard to believe that aged veteran had borne them.

'Yes, it is the same oak', though Prince Andrey, and all at once he was seized by an irrational, spring-like feeling of joy and renewal. All the best moments of his life of a sudden rose to his memory.

Much of this is cleverly condensed by Prokofiev and his new love Mira Mendelson in the first scene of his operatic War and Peace. Hvorostovsky's Andrey will certainly do to express the sentiments, though as this is a dimly filmed Tokyo performance, the subtitles, I'm afraid, are in Japanese, and the lovely opening theme, drawn from Prokofiev's abandoned incidental music for a stage adaptation of Pushkin's Eugene Onegin, has its wings clipped.

Well, as Tolstoy and Prokofiev knew only too well, such feelings don't last; joy and sorrow merely alternate. Although Noelle's funeral service, which turned out to my surprise to include a full Catholic eucharist, couldn't have been more elegantly organised - and of course our dear friend had a hand in the arrangements herself - it did prove more emotionally draining than I'd anticipated. 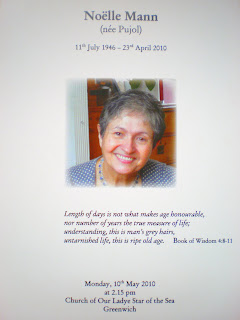 Wonderful to hear recordings of Noelle conducting the choir in which I once sang, the Kalina, and the Goldsmiths Chamber Choir in Russian ecclesiastical music by Arkhangelsky, Chesnokov and Kastalsky (we had the basses and the lingo, GCC a much surer sense of tuning and brighter sopranos). Deeply stirring, too, to hear Chris and son Tom deliver eulogies. Afterwards some of us sat to hear through to the end the Borodin Quartet's performance of the bittersweet slow movement from Borodin's Second String Quartet.

Wish I could have stayed on for the reception, since I'd fondly glimpsed old faces from Goldsmiths and didn't have time to talk - foolishly, perhaps, I was off to teach my Meistersinger class. But Noelle, with her motto of constant activity, would have approved of that. Also I thought I might have been unwise in clinging to an evening arrangement to see Khrzhanovsky's Brodsky fantasia-film A Room and a Half, but that turned out to be exactly the right sort of beatific masterpiece. More on it soon.

Oh, and if anyone who couldn't attend would like me to send them an order of service, I took five extra copies, so do let me know.

*Chris, on seeing this, told me that it was Noelle's favourite tree. Spooky, no?
Posted by David at 12:43

Very few great mentors get such a beautiful,full and evidently fitting tribute. Thank you for posting this.
W&P so rarely performed. Remember a production in the '80s (a decade marked out in operas for me: shoulder pads & silly telly series passed me by, too busy working mad hours to pay the even madder mortgage!). I believe it was @ The Coli; but not 100% certain - definitely rather more than somewhat grim, so likely!
Love the way that Tolstoy kept tripping Andrey up: A'd just reach one arid height of cynicism only to be knocked back down to earth by his sensuality and longing for belonging. Read the novel in gap year - and fell in love with Pierre, of course!
Noelle must have been very proud of you & your work on Prokofiev.

Your posts are so supportive, Minnie: thanks. Do feel I know you already.

It would have been the Coli one you saw, chiefly remembered by those lucky enough to have seen it for Norman Bailey's Kutuzov. Hence the kerfuffle when the Kirov came and threatened to perform a version without the (added-later) Kutuzov 'aria'.

That's the real essence of Tolstoy's characters, isn't it, the wavering between despair and thinking they've grasped The Secret of Life. Never read a truer analysis of how epiphanies arrive in moments, fade, reappear...

Are those Orders of Service yet spoken for? If it does not unfold to the size of an LP jacket or comparable size, it should fit conveniently onto my scanner for reading. Are there any recordings available, possibly even including her speaking voice? And, since you mentioned her prowess in the kitchen elsewhere, what might have been one of her best dinners for those who had the privilege of partaking?

And, hoping this is not a sacrilege since you mentioned it above, is this _Meistersinger_ course you are currently teaching a lead-in to Prom 2? And, to date, Mr. Bailey is the finest Sachs I have heard!

p.s. Maybe I should re-check for the link to that _War_ _And_ _Peace_ clip, unless it is an imbedded link my reader cannot recognize.

Don't quite get your drift, JV - these orders of service are in printed-out form only, so I don't see that a scanner would help - have to post it to you in the first place, but happy to do so.

Many of Noelle's Russian choral events were recorded, and of course she would speak at those. None widely available, though; I don't have any myself - must ask Chris.

Noelle's cooking ranged widely, but she certainly specialised in the cuisine of the Pyrenees where she had a home. I think when we dined there it was a Moroccan dish. But again, I'll need to consult with the husband of the masterchef.

When I pencilled in Meistersinger, it was in fact to tie in with the Welsh National Opera production opening in Cardiff in June, with Terfel as Sachs and the great Richard Jones directing. Since then, the whole kaboodle (minus I guess the production) has been announced for the Proms, too.

It's now official that Glyndebourne are doing Meistersinger in 2011 with Jurowski conducting, but McVicar's direction could be great or horrid, and I don't think for a moment Gerald Finley would be up to Sachs.

Keep glimpsing you across crowded rooms -- e.g. Barbican for the Martinu Fantaisies (sorry to miss your talk -- what a great performance of a great piece though) and in the opposite side aisle at Noelle's service.

Fully agree with you about the refreshments afterwards -- too choked up to contemplate talking to people. The Borodin was indeed a very moving conclusion, even if, unlike you, I didn't sit it out to the end.

On a different tack, I greatly appreciated your rave review in BBC Music Mag of the new DVD of The Gambler. I have a vested interest in that I wrote the English subtitles – though no doubt you didn't need them! With my fractured O-level Russian it was a tough assignment, but one I was particularly proud of (and that was before we did our Richard Jones production at ROH).

At first I didn’t rate the production on the DVD – all those people sunk in big armchairs inside a glass box with pillars! – how is anyone supposed to see what's going on? – but it grew on me. Particularly, as you say, the General's barking-mad scene with the teddy-bear.

Anyway, I am off topic so will get off the line!

Not at all, Jonathan - off topic/changing the topic is always welcome...and sorry not to have glimpsed you at any of those events.

How strange that I should wander onto your site as I searched for some commentary on the theme of Andrei and the oak tree to pass along to a despondent friend. In any event, this is lovely. Thanks.

Welcome, glad it hit the spot and - what an intriguing title...I assume you've only just written your first post. But I was also fascinated by the Samovar link you gave - there are these little pockets of the weird and wonderful all round the world, aren't there? The web can be a marvellous thing if you look in the right places.