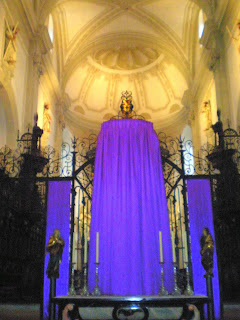 Without quite understanding why or necessarily believing, I always find the space between Good Friday and Easter Sunday the best limbo of the year – a time full of leisurely possibilities. The crucifixes and reliquaries remain shrouded in purple, like the one above at the Hofkirche of St Leodegar in Lucerne when I visited it less than a fortnight ago, feeling deliciously suspended between concerts and away from the Easter Festival hurly-burly. In fact that Christ crucified on the elaborate choir screen, as I saw from what my postcard told me, boasts real hair (‘mit echten Haaren’, hmm, creepy). 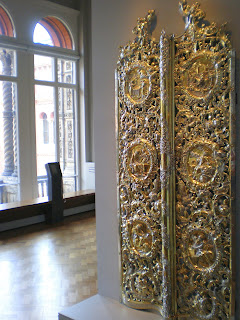 Of unequivocal splendour, on the other hand, is the pair of silver and parcel-gilt gates thought to have been presented by Catherine the Great around 1784 to the Monastery of the Caves in Kiev, now in the Gilbert Collection so opulently housed on the first floor of the Victoria and Albert Museum.

The gates have had a more profane recent life, if you can call it that, glimmering in Randolph Hearst’s Citizen Kane mansion and then in the California swimming pool of the equally wealthy Sir Arthur Gilbert. But they would, of course, have stood at the centre of the iconostasis, to be flung open at the climax of the Eucharist. If I’ve understood this right, their parting would play an even more dramatic part at the end of the all-night vigil to the cries of ‘Christos voskreseniye’ – ‘Christ is arisen’. The top two panels illustrate the annunciation and Christ’s entry into Jerusalem 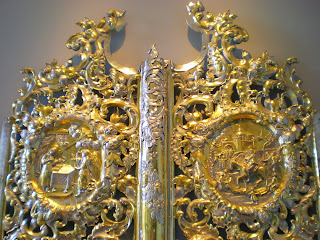 while beneath are the four evangelists. 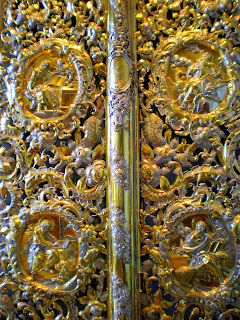 Here’s a little more detail of St Mark with his lion. 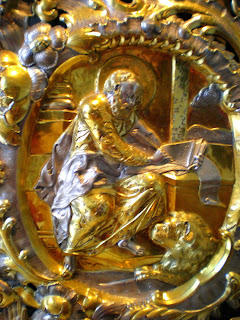 I think at this suspended time of year especially of quite a few friends and acquaintances who are suffering terrible, in several cases terminal illnesses. Been listening, of course, to devotional Bach, but in a secular context what touched me no less were the once so golden tones of Anthony Rolfe Johnson accompanied by Graham Johnson in Poulenc’s painfully sensitive setting of Apollinaire’s ‘Bleuet’, a poem from the trenches.

Since no translation is given above, and it’s essential, I provide it here, unpunctuated like the original French:

Young man
Of twenty
You who have seen such terrible things
What do you think of the men from your childhood
You know what bravery is and cunning
You have faced death more than a hundred times
You do not know what life is
Hand down your fearlessness
To those who shall come
After you
Young man
You are joyous your memory is steeped in blood
Your soul is red also
With joy
You have absorbed the life of those who died beside you
You are resolute
It is 1700 hours and you would know
How to die
If not better than your elders
At least with great piety
For you are better acquainted with death than life
O sweetness of bygone days
Slow moving
beyond all memory.
Posted by David at 09:13

what beauty in that gate. Love Poulenc such beautiful poetry. Thank you for that. Happy Easter to you, Auguri.

The Ukrainians suffered enormously, horribly, at the hands of the Russians ( more precisely at the hands of the Soviets, and even more precisely Stalin)and the suffering is remembered. The details of the terrible famine are still hung out in public from time to time. I would suggest taking the Ukrainian spelling transliterated as Kyiv rather than the Russian Kiev. And what a pity that the gates are no longer in their original position, now that the Caves have seen a re-awakening.......

The lion of St Mark as adopted by Venice held an open book in which is written PAX TIBI MARCE EVANGELISTA MEUS - but when Venice was at war the book was closed. Some years ago there was at the ENO a production of Otello in modern dress with the Venetian army in camoflagued fatigues, radio-active boxes being lowered into containers etc. Sue Bullock was Desdemona.... The lion of St Mark was displayed frequently but with an open book.... what a point to miss !!!

I am afraid I am very ignorant of war poetry written by the combatants other than the British. This poem is powerful stuff. Did German poets write anything of this kind?

Beautiful, visually and aurally. Especially poignant to hear the voice of Anthony Rolfe-Johnson. I have been experiencing a lot of loss lately, so this is making me weepy.

David, I think Gavin Plumley might know the answer to the German question, if he's visiting. I can't think of any examples myself, but maybe they haven't been translated. Apollinaire is a marvellous poet, and I love the settings of his verses in Shostakovich's Fourteenth Symphony.

Guys, in time of war, Venice's Lion was often depicted with a sword raised in its paw. On some Venetian tombs, the lion is weeping, an amazing thing to see. Was in Venice a couple of years ago, and specifically kept my eye open for lions.
St. Jerome is also pictured with a lion, because he supposedly pulled a thorn out of a lion's paw. In fact, St. Jerome iconography-- a monk in a cell, writing, with a lion at his feet-- is identical to that St. Mark panel shown here.

There isn't a lot of WWI poetry by Americans but of what there is, a fair amount is by Joyce Kilmer, 1889-1918 (actually Alfred Joyce Kilmer, I believe). Here's one example

My shoulders ache beneath my pack
(Lie easier, Cross, upon His back).
I march with feet that burn and smart
(Tread, Holy Feet, upon my heart).

Men shout at me who may not speak
(They scourged Thy back and smote Thy cheek).

I may not lift a hand to clear
My eyes of salty drops that sear.
(Then shall my fickle soul forget
Thy Agony of Bloody Sweat?)

My rifle hand is stiff and numb
(From Thy pierced palm red rivers come).

Lord, Thou didst suffer more for me
Than all the hosts of land and sea.

So let me render back again
This millionth of Thy gift. Amen.

There is also Debussy's 1915 "Noël des enfants qui n'ont plus de maisons" (Noël of the chilren who no longer have homes)with a text he wrote himself. It is a piece for children's choir, with a very angry text, asking that Christmas not visit the Germans and their children.

Ravel, of course, was more indirect. Each piece of the ineffable 'Tombeau de Couperin' is dedicated to a friend lost in the First World War - you could say it's a kind of requiem, but mostly a very serene one.

Hi David,
Can't find your email address anywhere! So forgive the public contact. Could you email me with your contact details so I can call you? I'd like to interview you for something!
My email is tommy@redtedfilms.com

you might be surprised to know that in many churches, particularly those of the Redemptorist Order,CSsR, the crucifix and reliquaries are clothed unil Pentecost, not just Easter.
Tamsin Travers

Ah, interesting. And when's the earliest they're covered from?