Springwatch III: along the river 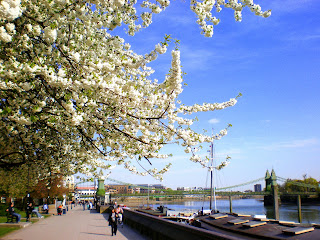 Planes were massing in the skies again towards the end of last week, but the vapour trails didn't manage to obscure the clear blue. Interesting, ambiguous observation on the quiet time from Tim Lott in The Independent; but for me, it's back to Fotherington-Thomas land and two lovely afternoons pedalling down the Thames. I needed them after a couple of what our Viennese friend Martha would call 'stressy' encounters. Equilibrium was restored and the bright blue is back again today.

I'd left it a bit late on Thursday to get to Kew and back in time to carry out my first theatre crit in something like twenty years: I was covering the UK premiere at the Almeida of Ruined, Lynn Nottage's Pulitzer Prize winning play about the suffering and resourcefulness of women in the Democratic Republic of Congo. As the review is up on the Arts Desk, I don't need to say more here except praise once again the strong, ultimately touching performances from Jenny Jules and Lucian Msamati (pictured below by Tristram Kenton).


Not seen such a glitzy crowd since...well, the Prima Donna prima a couple of weeks back. This time it was Islington chic, and actors by the yard. I found myself sitting behind heavenly Juliet Stevenson, and so wanted to tap her on the shoulder and tell her what her recording of To the Lighthouse had meant to my dear Nell Martin when she lay dying, but thought it might be rather heavy weather, and anyway the opportunity passed and the quiet end of the play was not the time and place. 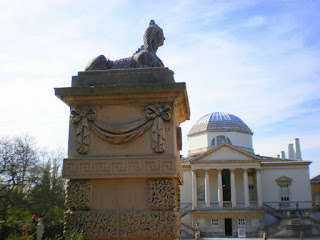 Anyway, having got as far as Chiswick that afternoon, I cut the Kew plan short and went to Chiswick House instead. I used to like frequenting the slightly run-down, damp cafe in the grounds, but found it had been replaced by a brand-new concrete building. The culinary contents looked a bit mass-produced at a first glance, but the suppliers turned out to be The Company of Cooks, the brilliant caterers who've transformed the Southbank. Then I took a stroll around the free-for-all park, which isn't exactly bursting with blossom but offers plenty of natural spectacles, not least coots' nests 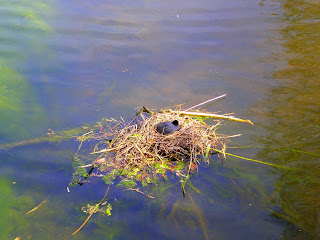 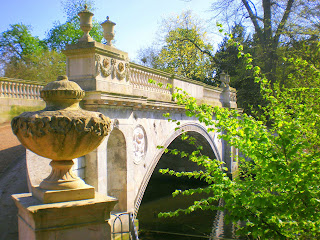 and further down, below the Palladian villa. 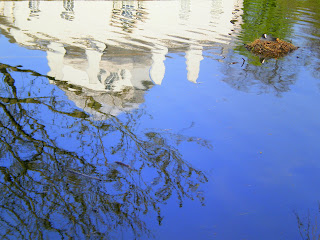 On the way back, one of the Thames's regularly positioned, solitary herons was proudly perched at Chiswick reach 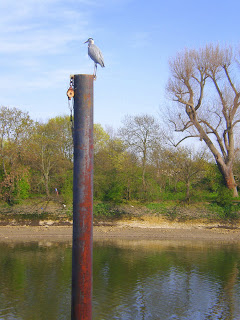 and the gunnera grows in one of the gardens right by the river, separated from their houses by Chiswick Mall. 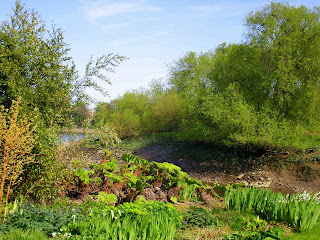 Thanks to the prunus over the wall, our own back yard isn't looking bad at all. 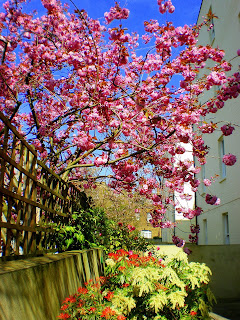 Kew will have to wait for a further instalment.
Posted by David at 10:01

Indeed, Minnie, heading westwards, the skies and the green open up. Hampstead Heath will do the trick, too, except on a busy Sunday.

Re your astute commentary on the Uccello dragon (since I can't comment there), you know he's the model for Tenniel's Jabberwocky picture? Only JT's dragon looks much, much fiercier than the perplexed child you mention.

I hope you won't mind me raising this issue here, since it is not directly related to the topic of this particular post as such, but I have just been reading your very comprehensive and interesting review on Arts Desk of Wednesday night's LPO/Prokofiev/Miaskovsky concert at the RFH which I also attended. I didn't wish to raise a comment directly beneath your review, since I seem to have a significantly different perception of what actually happened during the Prokofiev piece.

I have also read reviews by Ed Seckerson and Classical Source, and all of you, to a man, state that the cellist's walk-off during the Prokofiev was due to a broken string. Now I was sitting in row K, (Ed Seckerson was in J as I recall), so not very far from the action, intently watching the cellist, and I certainly did not see or hear a string go. When a cello string breaks, it makes one hell of a ping and flops about all over the place. I certainly did not see that happen. What I did see was Ishizaka suddenly stop and look up disconsolately at Jurowski and walk off, but not trailing a broken string. This looked to me, and I've seen it before, like a very unfortunate memory lapse. It was quite some time before Ishizaka came back on, and one of the percussionists was clearly sent off to find him or find out what was going on. Everyone looked mystified.

I'm not trying to be ungenerous to anyone here, least of all to a very capable and brave young soloist, but I am rather disconcerted about the differences between what I thought I witnessed and what I am reading about.

Very interesting, Hedgehog - I was puzzled myself for a bit, and perhaps incorrectly drew the assumption that it must be a broken string if he came back on. And it was in a particularly frenetic passage, so we all settled for that.

I'll make enquiries about this with the LPO. In the meantime, could you raise the same point in the comments section of the Arts Desk? It might yield more results there.

Many thanks for taking the time to reply so quickly. I have posted a comment underneath your review.

Crikey, an unexpectedly hefty thud of recognition and memory scrolling through those photos- I used to walk through Chiswick House grounds every day on the way to school.

And it just gets better by the year, Jon. There was a dreadful period where they were going to plonk a money-making conference centre next to the house. That threat has passed, and new things are being done with the statues, bridges and follies all the time. A precious free resource for the good people of Chiswick.

Hedgehog, the lovely Camilla in Val Barber's office has just confirmed it WAS a string break, so I've asked her to answer us over on the TAD thread.

I've posted this over on the Arts Desk too, Hedgehog, but just to clarify, this is from the maestro's mouth, and confirmed by at least four other folk in the audience: 'it was without any doubts a broken A-string - the same as the day before during rehearsal in nearly the same episode (spooky!!) Danjulo has nerves of steel and knows the piece inside out (including the orchestral part!) - you
can take my word!'

Chris Mann said, I think, that when he met VJ in the interval he told him Ishizaka was playing on Rostropovich's cello. Hence the spooking.

Sincere thanks for your extremely conscientious approach to this - in a sense way beyond your normal responsibilities as a critic rather than 'investigative reporter'. The clarification is clearly important for everyone, and especially the performer. I am most grateful for your efforts and for the report of a verification by VJ himself and others that this was indeed a broken string. The repeat breakage in the same passage and Ishizaka's use of Rostropovich's cello does add a particularly weird dimension to the 'spooking'.

I will also put this on the TAD site as thanks and acknowledgement.

No, David, I wasn't aware of the Uccello-Tenniel connection. Thank you so much for that piece of info., which delights me as I love to learn of such correspondences. Now off to be suitably scared by Jabberwocky!
PS If you click on the blogger name, you'll see messages are poss. I made that the sole route for commenters after total ban due to spate of hateful ones (surprising, as I tend to avoid contentious material).

PS Forgot to ask if you'd seen any of Pat Andrea's re-interpretations of Tenniel's illustrations for TtLG & AiW. I thought them vile. Wrote blogpost about the exhibition ages ago, and still harrumphing - that bad!

Just dipped in on YouTube, Minnie, and can't say I cared for them overmuch - but at least he's trying to get away from Tenniel rather than be a pale imitation.

I CANNOT adapt to new Alice illustrations, which may be my problem. Tenniel's follow Carroll's own, which are charming. Mervyn Peake is as far as I go. Though I was intrigued by a clip of Svankmajer's animation, which I put up in a post back in March along with a charming 1903 film (http://davidnice.blogspot.com/2010/03/first-lord-of-savoyards.html)