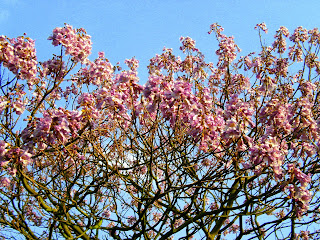 Which is what we whimsically call the Chelsea Physic Garden. It's one of those places, like the Freud Museum where I was an 'educator' so many years ago, where no matter how frazzled and stressed you might be when you enter, you usually leave walking on air. So it was for the rather diverse bunch of folk we gathered together for lunch at the haphazard but lovable, top-notch Tangerine Dream Cafe, outside which we roasted unprotected from the strong sunshine.

Spring has certainly burst in the Physic Garden even since I visited earlier last week. For a start, the pitcher plant sprout turned out to be a flower, not one of the carnivore's scary flytraps 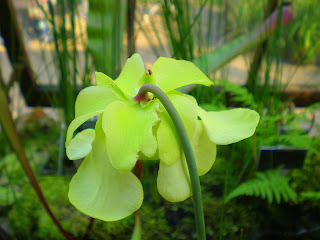 while the pond and the beds are much advanced. With the late spring, stuff that's normally over by now coexists with some early arrivals, like the first peony. 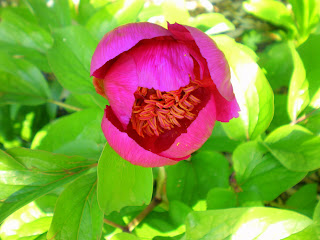 I noticed for the first time, in the south-east corner, a tree the Chinese love because they believe its fruits attract the phoenix: a Paulownia, sub-categorised I believe as 'lilacensis' for obvious reasons. 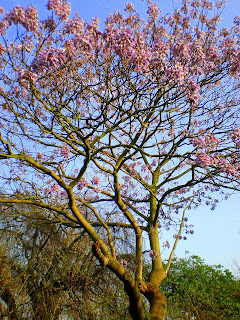 Heading back to the cafe after a stroll, I found our friends Cal and Ching deep in conversation with a stylishly dressed lady who'd taken a place at the table. She was local writer Shelley Vaughan Williams, and I have to say I was a little sceptical about the poetry she bore with her in book and manuscript form. Then I opened this volume and found her attempts to express the ineffable remarkably clear and unsentimental. 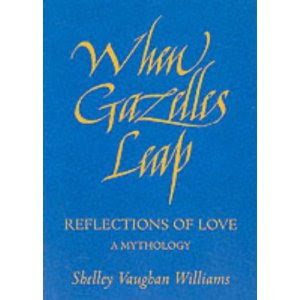 SVW, widow of a relative of the composer, seems to have been through a great deal: unable to move or speak for a year after a brain aneurism, she now seems restored to health even if her memory fails her, she said, and she's probably more pass-remarkable than she would have been before. Cal thought she might try and use her publishing skills to promote the manuscript. Here's a nice shot of them together. 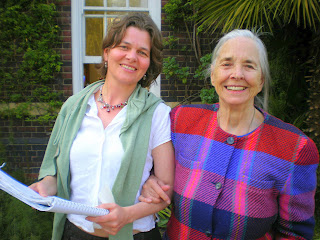 Our intellect and our emotions are divisible. At the splendid lunch at the Physic Garden, David Nice seized on the poems of Shelley Vaughan Williams ( though I encouraged her to sit at our table). I was talking to another lovely lady who knew the Davidsons - the first Lord Davidson was one of the small group who chose Baldwin over Curzon as Prime Minister in 1923. { Curzon did not deign to use the telephone when in the country, and in the train up to London he was planning his Cabinet......)

Similarly in Moscow and Leningrad in 1972 I sought out the memorials of the Emperors. In the Winter Paalce I walked past the Rembrandts on my first visit, following a Baedeker of 1912, which described the tremendous functions held there - such as the balls : "An Imperial Table, raised and aloft, commands the whole scene"). Whereas a Professor of English from New Zealand could hardly describe his emotions when he stood at the tomb of Pushkin. Yet I believe that at that time Russian literature outshone all others, and he accepted the importance of Russian policy before and after the revolution : but our emotions were not engaged, whatever the strength of our intellectual interests

Interesting, David, and I didn't know you had made the introduction, as it were. But I don't quite catch the drift of your thoughts here?

I believe that Russian literatue of the nineteenth plus century is the greatest cultural achievement of that period - and some of the greatest of all time. But I would not have thought of going to the tomb of Pushkin. My interest is and was intellectual. Whereas the NZ professor was almost incoherent about his visit to the tomb. So his emotions were engaged, mine not

On the other hand I was emotionally involved - powerfully - when I imagined the Imperial events in the rooms in the Winter Palace as I walked through them. So one's emotions and intellectual interests do not coincide

I do not see why this is. I have been more affected by Crime and Punishment than any other novel except possibly one. But I would not think of seeking out the tomb of Dostoyevsky.

Temperley said that you could always tell an historian. Give him a necklace and - only after a minute or two - tell him that it belonged to Marie Antoinette. The face of a true historian would light up. That is true of me - but as I have said that does not mean that I do not place other achievements in the highest class

So I was more emotionally attracted by a converation about the Davidsons than about the poems, without in any way not appreciating their quality