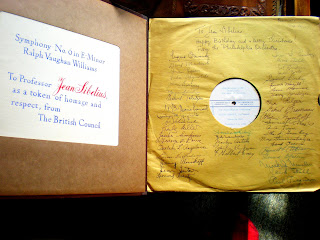 The gramophone collection at Ainola is mostly a comprehensive collection of Sibelius's own music, in test pressings and finished 78s. Possibly all the outsiders were unsolicited gifts, which is maybe why the library of scores gives us a better idea of his extra-Finnish tastes. The middle-period Vaughan Williams symphonies, for instance, are all there, complementing the above gift - pictured above left - from the British Council of the masterly Sixth (VW dedicated his rather less eventful Fifth to Sibelius; I always think it should be heard between 4 and 6, just as the last three Sibelius symphonies can be played together).

On the right above is the first test disc of two signed by Eugene Ormandy and all the players of the Philadelphia Orchestra in 1951 of their recording of 'The Swan of Tuonela' from the Lemminkainen Suite (in which Ormandy excelled, and to which he returned for EMI in later life).

I was especially curious to hear a pressing or two, especially some Leeds Festival discs of The Tempest music - were these simply forerunners, I wonder, of Beecham's wonderful recording? - but curator Hilkka Helminen didn't quite trust the needle of Sibelius's trusty but possibly rusty radiogram. 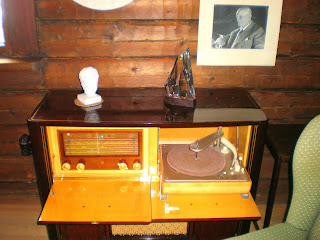 Picking up on my Russian connections, Hilkka also showed me a real treasure - a beautifully bound homage from the Union of Soviet Composers to Sibelius on his 80th birthday. Of course I nearly gasped with astonishment to see that my main man had written the opening theme of his newly-composed Fifth Symphony in his entry 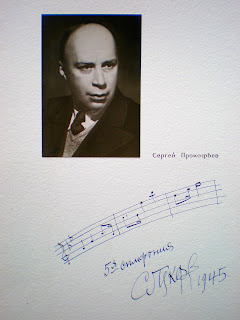 and that Shostakovich, with a few words of respectful birthday greetings, proferred the finale of his Ninth 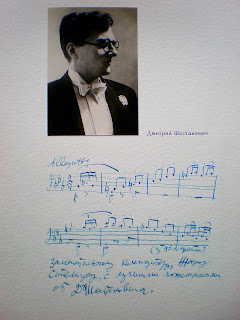 both of them reminding us of the symphony's continuing vitality as a form in 1945, long after Sibelius had officially given up on it. Hilkka also told me that Vladimir Jurowski, visiting Ainola a couple of years ago, had been both moved and surprised to find a dedication in the same volume from his grandfather.

An apt footnote, while we're on the subject of Sibelius on disc: I've only just learned that Danish conductor Ole Schmidt has died at the age of 81. 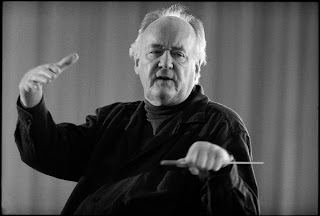 I've heard precious few of Schmidt's recordings but I became addicted to his Sibelius Five with the RPO when it was reissued on the bargain Regis label and was listening to it only a couple of days ago. His style is bracing - clear and bright, no chiaroscuro - and I was quite taken aback by the anguished peak of his 'Swan of Tuonela'. Unlike Vanska, whose Sibelius I found so disappointing live, Schmidt seems to know when and how to unleash the big climaxes - no easy task in the opening composite-movement of the revised Fifth.
Posted by David at 08:51

This may be a small point, but do we know when these VW scores were acquired, especially that of the _Fourth_, thus giving us at least a circumstantial clue as to whether Sibelius admired VW's music prior to first hearing the _Fifth_?

On a slightly-different, though related after a manner, tack, a relative of Sibelius, whose name I know but dare not try to spell, recorded at least some of his music, and yet we seem to hear none of his work these days. Was it not up to scratch?

No, at least not from the catalogue.

Not sure to whom you're referring in your second para.

Fritz spent a summer during college working at a Friends International work camp north of the Arctic Circle in Inauri, Finland, building schools for Lapp children. He even learned a respectable amount of Finnish and loved the place. Since he's always loved Sibelius, he was delighted when I got him to sit down to your posts, the house being a particular favorite. Thanks, David!

What an impressive pair you are. Kippis!

This conductor was, I think, Sibelius's nephew, and may have been in charge of a festival in Helsinki shortly after the composer's death. Spelled phonetically, it is something like Yusi Yallis.

Oh, right, Jusi Jalas (if I remember correctly: had a recording by him of the Lemminkainen Legends).

A BBCSO cellist told me that the two conductors she'd found the most inspiring to work with were Neeme Jarvi (my hero) and Okko Kamu, which is interesting as I've never heard him live. Berglund apparently doesn't conduct much, if at all, any more. He was the greatest.

I have a number of Berglund's recordings, fine work all.

For a while many years back, there was a wonderful outpouring of new Finnish opera but that has either ended, or the non-Finnish opera world is no longer interested. I remember particularly an opera or oratorio named, I think, Thomas, on the Bishop who sent the Teutonic Knights to their deaths at the hands of Alexander Nevsky.

Sallinen's are perhaps the finest, and there was a splendid recording recently of The King Goes Forth to France. Saariaho's leave me underwhelmed, and even her admirers have been losing interest recently.

I suppose that those in charge of the collection or records at the house of Sibelius know that modern techniques could transcribe them beautifully? And even correct ( some of the ) defects. I have "All God's Chillums have Wings" transcribed from a pretty ropey original, and I am aware that that is not by Sibelius.

Hopefully both of you know the famous Gibbons madrigal, "The Silver Swan," which manifests that very thing.

JV, you're referring to Sir David's terrible pedantry on the 'swan songs' entry - I did indeed think of invoking that exquisite Gibbons piece, which I've sung with such pleasure, but didn't - though it's been running through my head ever since.