In praise of Percy 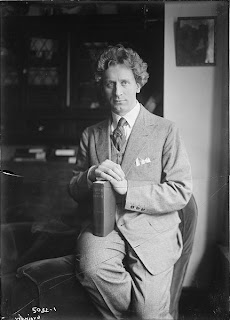 No innuendo is intended, though given Percy Grainger's voracious and distinctly dodgy sexual obsessions it could be. Anyway, I'm currently deep in a bout of Graingermania. This has been quite a week for hearing great stuff I've never come across in the concert hall before. Saturday was the Alpine peak, perhaps of the year: Martinu's most consistently powerful symphony, the Third, in the penultimate instalment of Belohlavek's BBCSO Martinu symphonies cycle. Thanks, Thomas and Hedgehog, for 'spreading the love around' in your comments to the previous entry. But what led to a more recent re-discovery was maverick Swede Bengt Forsberg's inclusion of Grainger's To a Nordic Princess as the first of his two encores in last Wednesday's recital.

As a result, I dug out my CDs of Martin Jones and the man himself in all the works Grainger 'dished up for piano', and I started reading John Bird's biography. Bird's prose makes for very sober reading alongside the mad screeds of Percy himself, but still, what a life! Even before he appears in the world, there's crazy Rose, the mother from hell, wishing good thoughts on her unborn child by banishing her hapless hubby from the boudoir and fixating on a statue of Apollo at the end of the bed. Whatever problems Percy subsequently had - not least the appalling flagellation which he openly wrote about wishing to apply to small children, so thank God he had none of his own - can be laid at Rose's door. Peter Carey should write a novel about the relationship between those two; maybe Jane Campion could make a film of it.

The fact remains, though, that for all his psychobluster and inconsistencies, PG seems to have been a natural man, the freshest of composers and a master pianist. I'm now listening to his performance of Chopin's Third Piano Sonata, and I reckon the slow movement is my favourite now, while the finale is the most vivacious ever. What a shame there's not more film of his playing; I could only come up with this less than minute clip from a documentary. It's worth seeing, if only for the extraordinary flying motion.

Grainger was inspired by Eugen D'Albert during his student time in Frankfurt: 'when I saw D'Albert swash around over the piano with the wrong notes flying to the left & right & the whole thing a welter of recklessness, I said to myself, "That;s the way I must play". I'm afraid I learnt his propensity for wrong notes all too thoroughly.'

As for his own compositions, I was knocked for six by the In a Nutshell Suite, where cowpat pastorale goes off the rails into Schoenberg/Ives territory, and then on for another six glorious minutes. Had a YouTube clip of Grainger's deepest slow movement in its orchestral version conducted by Rattle, but I now see that's been removed 'due to third party infringement'. Shame.

I worked out that next February will be the fiftieth anniversary of Grainger's death. I don't see his bracing and prolific output featuring in any of the major orchestras' rep, but let's see what happens.
Posted by David at 10:34

Have you heard his extended arrangement of Foster's "Camptown Races," with added words presumably by himself? If not, you may find it at the end of a Grainger disc conducted by Sir John Eliot Gardiner, recommended to me by Col. Michael Colburn, Director of the United States Marine Band. "The Lost Lady Found" is sung in a strong provincial accent, whereas the Britten recording is more straightforward. I admit to liking Mr. Shirley-Quirk's performance of "Shallow Brown" for Britten, though understand the song to have been arranged for a woman and so performed on Sir John's disc. This past Saturday one of the Marine Band's Assistant Directors, Capt. Michelle Rakers, gave a conducting masterclass at George Mason University in Fairfax, Va., and one of her students worked on the "Children's March, Over The Hills And Far Away." Capt. Rakers wanted the conductor to bring out the quirkiness in Grainger.

p.s. Col. Colburn would like for me to hear _The_ _Warriors_, the other work on Sir John's disc with _The_ _Planets_.

I fell in love with 'Tribute to Foster' when I heard it at Aldeburgh in the early '80s - was utterly transfixed by the wineglass music of the spheres in the middle (and the Ivesian ending). I have it on some ancient cassette, must replace.

He's so friendly to all sorts of groups - would be great for an educational project bringing together diverse ensembles. Love it all, though a little of the folksong arrangements can go a long way. Pears singing 'Brigg Fair' is rather ravishing.

Unless I've seriously missed something, Grainger is almost completely unknown here. For many years one of our finest classical music radio stations broadcast concerts by the major U.S. orchestras each night of the week. I never heard anything by Grainger programmed by any of them.

Shepherd's Hey did get some play very occasionally during the day via recordings.

There may have been some Grainger programmed by the Boston or Cincinnati Pops orchestras but it hasn't stuck with me if so.

There's an awful lot on CD - 'the complete' on Chandos, for a start. His works are difficult to programme because he never went on for long - didn't believe in what he thought were the outmoded forms of symphony and concerto. That's not to say there isn't a lot of radical stuff. In anything new, he would claim to have got there first.