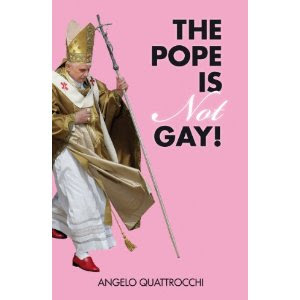 Very well, so we can briefly have a laugh about the red Prada shoes and the handsome personal aide, but it's not evidence. Irreverent humour is no doubt one way of dealing with the more absurd aspects of Pope Benedict XVI, who arrives on our shores with all his usual pomp (and at an estimated £11m to £13m cost to the taxpayer) today. I’m not going to buy the above book, in which respect I may seem like those staunch Catholics who denounced Peter Tatchell’s Channel 4 documentary without having even seen it. My loss perhaps: I may be missing out on some shrewd points.

But this is no time for jokes. What we need are facts, quotations, eloquence and fierce indignation to clarify what so many of us feel is wrong about the Vatican today. Not the Catholic church here, which has done a great deal more to express its abhorrence of recent scandals, nor the individual Catholic worshipper, whose right to reach towards a sense of the numinous in his or her own way should never be mocked or trampled over . And there are of course those Catholic priests like Father Shay Cullen in the Philippines, most potent and simple speaker on the Tatchell documentary, who seem to be emulating Christ’s example in serving the poor, not being served.

Clearly more of the finer detail is revealed in Geoffrey Robertson QC's treatise. 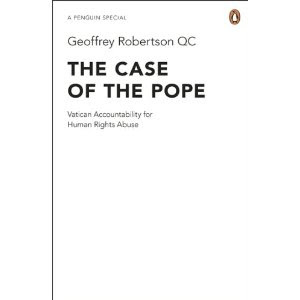 Again, I'm putting it forward without having read it - having, in fact, done what I usually deplore and taken the nub of it from the Financial Times book review. But there is a middle way between frivolity and earnestness, as I propose below.

In the meantime, one gentleman who’s posted here and others closer to home have suggested I really ought to read some of Ratzinger’s more complex religious treatises. I think I’d rather delve into the Gospels and find out what Jesus is supposed to have said which directly contradicts the powerful hierarchy of the Vatican. Never mind all the ridiculous statements that Benedict’s right-hand man and cardinals have made over the past few months; the problem which seems to loom largest is the interference in the conduct of the daily lives of millions of poor and uneducated people. Keep them poor, foist on them a dozen children they can’t afford to support.

That, I guess, is what made me angriest of all in Tatchell’s whizz through the issues. I do think he’s a human rights campaigner who’s pulled off so many stunts around the world worthy of our admiration. But he’s not, perhaps, the most eloquent or fact-careful speaker. So you can imagine how delighted I was to find this 2009 debate featuring Stephen Fry, shaking with passion and anger but declaiming with all his usual eloquence and humour.

If you want to get to grips immediately with what was so offensive about Ratzinger's 2001 letter ordering bishops, on pain of excommunication, to handle the child abuse scandal ‘in the most secretive way, restrained by perpetual silence’, and why Fry as a proud gay man resents being told that his sexuality is oriented ‘towards an intrinsic moral evil’, you could start at Part Two. But I recommend the whole of this searing speech as one of the finest I’ve ever seen from anyone – and most politicians don’t begin to come close. Stephen, I salute you.
Posted by David at 08:33

Saw the FT review of the Robertson book - cringe making. And does bring up the question of Statehood for that country across the river.

The way they have co-opted Newman in this whole beatification process is disgusting and dishonest. I know not two words you would have thought of in connection with the Vatican! Damn where is that emoticon for sarcasm?

Sorry, Will, didn't quite get you on the 'two words'?

Agreed, the Newman business is wrong. Need to listen to a half hour radio doc on the man, but I'm pretty sure they removed him against his VERY explicit instructions from the grave he shared with his long-term companion.

I do urge you to watch the Fry speech - the passion of the later stages (Part Two if you've not got time for the whole thing) brings tears to my eyes.

sorry David "disgusting" and "dishonest" - not two words we would every associate with the Vatican?????

Yes I'd heard the Fry before and it is passionate without being impassioned.

With Newman it is not only the moving him from his grave but the way they have co-opt him to make it sound like he was an unquestioning son of the church. Nothing could have been further from the truth. He was constantly questioning faith and the Papacy.

Indeed - as was implied by one of the two quotations I took from the Tatchell documentary in my Arts Desk review: the toast to 'conscience first and then the Pope'. Must find out more about John Henry, though. His large portrait was on the banners of the Brompton Oratory as I cycled past yesterday.

The wordly analysis of the inappropriateness ( to speak calmly) of the social prescriptions of the ancient religions may centre on the fact that when the spiritual revalations were manifested certain social norms then current were embodied in the subsequent doctrines and given the same authority as the Eternal truths proposed. Thus contraception and gay relationships were heavily proscibed in ancient socities since it was vital for the tribe to grow in numbers in a competitve world. But these norms are now at best irrelevant and more often highly undesirable, as set out by Stephen Fry

But there is another line of thought which condemns the position also of the evangelicals who look to the literal inspiration of the Bible. Take St Paul in Corinthians 7 verses 7 and 9 [I take a modern translation, the International Standard Version, 2008]

7 I would like everyone to be unmarried, like I am. [...]
9 However, if they cannot control themselves, they should get married, for it is better to marry than to burn with passion.

Maybe Paul expected the Second Coming to be imminent.In any case his views on sex can have no interest, since they are based on an assumption that ( in the absence of the Second Coming)the best thing would be for the human race to die out.

[Can anyone say where I can find an argument in this sense?]

Thank you, Sir David, and as an admirable exponent of eloquent rhetoric yourself, I assume you were rather impressed by Sir Stephen's speech?

On a visit last year to the Tersa Loggia (the popes apartments) in the Sacred Episcopal Palace, a Monsignor was giving a talk on the papacy and foreign affairs. He said, when the pope travels abroad, he does not ask nor does he want any of the official reception he is given that the host State. It is simply given to him by the host State because of the enormous respect they have for his position.
I thought, Yeah, sure and no one in the Vatican Secretary of State will ask for this kind of reception on a visit.

Well, Laurent, he came and went, many people enjoyed the pomp, and we learnt that there are no depths to which this embattled regime will not stoop.

a) comparing Heathrow to a third world country and not apologising.
b) comparing the more forcefully reasoned opposition ('aggressive atheism', 'aggressive secularism') to Nazis.
c) still hedging bets about apologies to the abused.

I'm grateful for the revelations, and for further chances to read what Pope Ratz in his incarnation as prefect for the etc etc actually wrote.

Yes I was impressed - very impressed - by Fry's speech. I agreed of course with the content but the structure and delivery and the focussed but controlled passion were of the first quality. [Incidentally if one listens to Martin Luther King's famous speech in full - not just the " I have a dream" bit - one can be impressed by the structure]. ON the basis of this speech I would recommend him for higher things

I really wonder why so many politicians speak so badly. No cadences, no balance in the themes, no music etc etc and with the voice so often flat and boring. Maybe you have to be born with the talent. Hague can do it, but my list is very short. To an extent they have to be so careful not to have the media seize on some tiny remark and blow it up to foolish but dangerous proportions, So they may be constrained for that reason.

As regards Laurent's points, I would add that the Pope's visit here was in part a State Visit, hence the formality and glamour, fully justified once a State Visit is agreed. We can do these things quite well and HMQ is a real pro. And I must also add that the Cardinal who made the "third world" gaffe is a very jolly fellow and I really believe his excuse that when he arrived he saw so many races that the remark sprung to his mind. Not an excuse of course, since a Hinge of the Church should be more careful.

Have to convince myself it wasn't all smoke and mirrors given SF's current ubiquity. But no, he's tremulously sincere and on top form here. If only he wouldn't spread his wit and wisdom so thin.