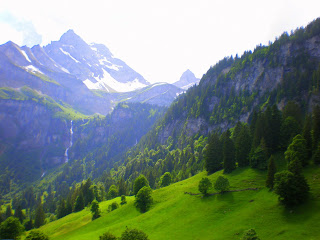 Planning to take a few days away from Zurich in fresh mountain air, we decided on the relatively remote region of Glarnerland in Eastern Switzerland, and the plateau village resort of Braunwald; reachable by train and funicular in less than two hours, it's hardly what we would call out in the sticks, thanks to the efficiency of the integrated Swiss transport system, but it does avoid the international crowds which would have plagued another destination we toyed with, Engelberg - playground of Bollywood filmstars and brussel-sprouted coach trippers. What we didn't realise until we arrived, sweating in the heatwave twenty minutes up the hill from the Braunwald funicular stop, at Alexander's Todiblick Hotel, was that Bartok had been here too. For that knowledge, we have the Hungarian Ecumenical Choir of Zurich's plaque to thank, and not the hoteliers, who didn't seem to know anything about it. Before I go on to tell you about my minimal detective work finding out what, if anything, the great man composed here, let's consider the views he would have enjoyed - a 180 degree panorama of mountains, including higher peaks like the Todi and its confreres across the valley (at 3614m)... ...and the commanding genius of the locale, the Ortstock, to the right of the hotel. 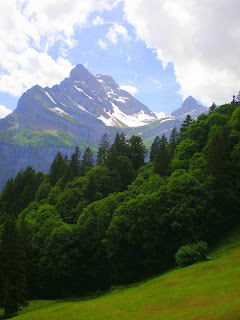 All this can be enjoyed without moving beyond your hotel balcony, though we were quickly off and further up to explore the Brummbach falls and the higher slopes. It was exciting to discover, once home, that Paul Sacher's commission for what was to become that most haunting of all Bartok's orchestral works, the Music for Strings, Percussion and Celesta, reached the composer on 27 June 1936 while he was still in Braunwald; he left for Budapest a few days later. But might he not have started work in Braunwald? I e-mailed Dr. Felix Mayer of the Paul Sacher Foundation in Basel and part of his response runs as follows: 'It's quite possible...that some preliminary sketches were made while Bartók was still in Braunwald. But we don't really know as the sketches and draft of Music for Strings [as the new piece is headed on the m/s reproduced below] are not dated. 'And there is another matter: the beginning of the original draft of the first movement may in fact have originated before Sacher's letter reached Bartók. That's only a hypothesis (based on the observation that the movement started out as a piece for strings alone and that the percussion parts were added later); but it does strengthen the suspicion that Bartók may very well have written some of the music that was used in Music for Strings during his summer vacation in Switzerland.' 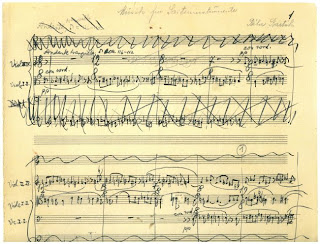 So this opening page of the manuscript, now available to peruse at leisure among the Sacher Stiftung's lavish facsimiles, could have been sketched in the Todiblick. Whatever the case, I like to think that the eerie desolation of the first and third movements chimes in with the 'Gewitter' we experienced on our next day in Braunwald, when the clouds rolling in prevented us from ascending the peaks and we made a lower-level hike to the secluded Oberblegisee (at 1422m). Just had enough time to eat our picnic, bask on the rocks, and admire the outlines of the Bachistock and Glarnisch before mist obliterated everything and the heavy rain began. Here, by this rock, I can almost hear the xylophone of the 'night-piece' like a stone dropping into the water and creating ripples on the still surface. 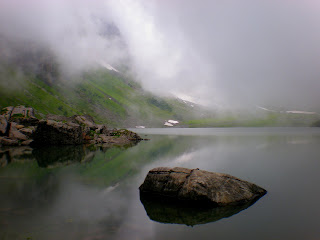 Well, we had our vision. And of course the composers' worlds our Alpine sojourn most frequently evoked, as always, were those of Strauss's Alpensinfonie and Mahler's Sixth and Seventh Symphonies. By the lake, we had all the Mahlerian accessories in an eerie context: cowbells - so poetic from afar, so nightmarish at cacophonous close quarters - a distant cuckoo and the forbidding shapes of the big mountains above. Equally, of course, Mahler's sunny side of nature came to mind in the flowery meadows and the wayfaring high spirits. 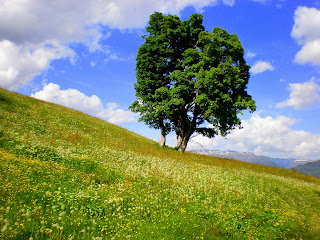 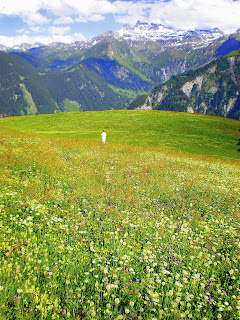 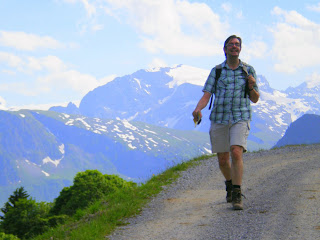 I can't wait to return - even if we shan't be deserting our beloved Appennini where the food is better and the agriturismi rather cheaper than Swiss bed and board. One afterthought is bugging me: I'm sure I must have heard Sacher conduct the Scottish Chamber Orchestra in the 1980s when I was a student at Edinburgh University, but I can't for the life of me remember the programme. I know the SCO played the Bartok Divertimento several times, superbly, but would it have been with Sacher?
Posted by David at 16:13

No wonder Bartok loved it. What a beautiful place, even by Alpine standards. And I see what you mean about the eerie lake.