'Italian' whips up a storm 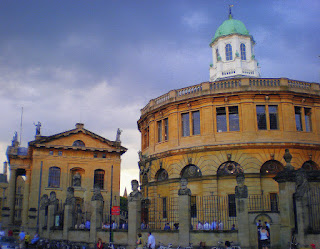 It’s high time I scratched the surface of anniversary hero Mendelssohn. Earlier this year, I regretfully said no to being a panellist on a Radio 3 Mendelssohn Weekend special, if only because the nice researcher wrote ‘I hear you’re a Mendelssohn expert’, and I had to respond that I was nothing of the sort – as it turned out, few of the guests were - though I know what I like. I could certainly have rounded on certain pundits who dismiss our Felix as a second-ranker ('trained from infancy to be polite to the banking classes...a shortcoming that he never fully overcame', etc - I won't grace the rest with a link). Even if he’d died at the age of 17, having written those cracking string symphonies, the Octet and above all the Midsummer Night’s Dream Overture, he’d still have left us one of the greatest miracles in all music, a Shakespearean musical narrative suitable for all ages and tastes.

On Saturday, staying at friend Hen’s family home in north Oxford, I had a chance to broaden Mendelssohnian horizons a little. Lucky Oxford: Andras Schiff was in town, conducting and playing with a suitably downsized Philharmonia in the Sheldonian Theatre. I've never heard before the B minor String Symphony with which they began – an astonishingly mature lamentatory intro and sprightly allegro with a lyrical theme only Mendelssohn could have written. The Violin Concerto was a performance of merely competition-quality from the soloist, 18 year old Serge Zimmermann: well intoned after a dodgy start and muscly at times, but without the sweetness and smiles the work needs. Schiff’s own centre-stage playing in the Second Piano Concerto kept this charmer on the move, as he also does everything he conducts. He never goes for over-sentimentality but the sentiment was certainly there in amongst the sharp profiles. The D minor Concerto boasts another vivacious finale, and an even more striking link between the first two movements than the Violin Concerto.

Indeed, it struck me afresh that Mendelssohn at his best triumphs on all counts – structure (plenty of surprises when you least expect them), rhythmic energy, pleasing thematic shapes and a classically poised gift for orchestration (think of the flutes in the steady religious procession of the ‘Italian’ Symphony, the lower-strings-and-horn counterpoint added to the fiddling in the Violin Concerto's finale). As for the symphony as a whole, I can think of several Beethoven movements I’d sacrifice for any one of these four. More players onstage helped to fight against the rather airless acoustics of the Sheldonian, and I loved the valveless ‘period’ horns’ bite in the scherzo trio.

They added menace, too, to the saltarello, which was already rather scary since we glimpsed lightning through the Sheldonian's upper windows and heard distant rumbles of thunder (you can see how threatening the skies were in the above photo, taken during the interval). Whatever the shortcomings may be in terms of sound, isn’t it a special pleasure to be in a hall where plentiful natural light bathes the scene? I’m thinking, too, of Edinburgh’s Queen’s Hall and London’s Cadogan Hall. The Sheldonian is a beautiful building, if stylistically a bit of a hotchpotch. Pevsner takes young Wren’s revolutionary classical exterior to task for its ‘immaturity’, and laments the un-rousing quality of Streeter’s painted ceiling. That's nicely complemented, though, by Sir T G Jackson’s 1876 organ case. 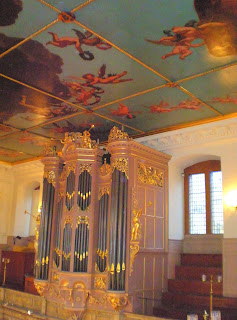 There – I got the name ‘Jackson’ in to the blog. Do you berate me for having kept mum about the late Michael? Apart from a certain vague sadness at the ‘too soon’ aspect, I don't have much to express: was charmed by the youngster’s ebullience in the Jackson Five, never really got to know the hits of his heyday (and some say I should), and after that, well, has there been much to it except good stuff to dance to as well as all the peripheral seediness? Other untimely deaths of those I never met that touched me more would have to be those of Princess Diana (yes, really, at least to start with), Derek Jarman, Freddie Mercury, the fabulously funny Linda Smith. I’m sure there are many others.

Glad, anyway, to be oblivious of the media feeding frenzy in the cloistered calm of Oxford. Framing our concert and a lazy afternoon on a north Oxford lawn catching up with Alan Hollinghurst were two of our now-ritual visits to Christ Church Cathedral evensongs. This choir has to be the best I’ve ever heard in the context of church services. 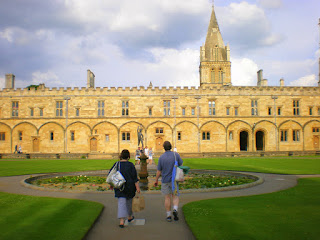 Saturday afternoon, before the heavens opened in tropical rainforest style, was mostly Anglo-Irish blowsiness: Stanford in C, stout and steaky as only the Christ Church choristers know how to make it in the Glorias, and Bairstow’s ‘Blessed city, heavenly Salem’, suitably brilliant for the shining of the pearly gates and fading to a ghostly quiet close. 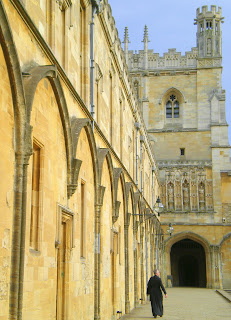 Sunday introduced me to Tomkins’s Fifth Service – such fun when the choir prancingly delight in the putting-down of the mighty from their seat – and the anthem was Palestrina’s ‘Tu es Petrus’. Plenty of fine solos all round, and we were lucky to catch them before they disappear for the summer holidays.
Posted by David at 16:00

Just to add my voice of thanks for the Discovering Music on Prokofiev 5 - the perfect blend of enthusiasm and authority. Loved the sideways glances at other works.

Glad you've hit the nail on the head with Mendelssohn too.

the other disadvantage about digital broadcasting is that at live broadcasts, such as Radio 3's Prom concerts or Choral Evensong on a Wednesday afternoon, the more people who tune in, the thinner the digital output becomes, producing that "tinny", rather lifeless sound. This doesn't apply to analogue because however many people tune in, the sound waveband is "wide" enough to cope. BBC analogue for Radios 3 and 4 is generally considered the best that you can get, so why do away with it?
ps I strongly disagree with your assessment of Christ Church as the best collegiate choir - try Magdalen College Choir for a less anglican, more continental, Catholic style.
Miranda Hawkes(PPE,Magdalen,Oxford now PhD student at UMIST)

That's interesting, Miranda, about the digital output thinning in proportion to how many people listen.

As for CCCC, I did say of those I've heard live - next time I'll make sure to hear the Magdalen lot (though I guess you're a little biased). I thought the nice thing about the Christ Churchers is that they DO make an earthier sound when they need to than your average church/cathedral choir.

again from Miranda Hawkes
I still tend to think that CCCC can be that little bit precious, what the great musician George Malcolm would have called "hooting". I left Oxford last year so they may have changed since then. The choir of Brompton Oratory still lifts me off my feet(I am fairly anti-popish)and the Romainian Orthodox singing in St Dunstan in the West, Fleet Street,
is really remarkable though entirely spontaneous and non-professional
Best
Miranda Hawkes
ps my favourite pre-amp and power amp combined is a Naim set, made in Southampton, which I bought secondhand three years ago. It still set me back quite a bit, though worth every penny, especially when combined with a Meridian analogue tuner(also British).

Yes, the Brompton Oratory group makes a big sound for so few singers, as does the (8-strong) choir of the oh-so-high-Anglo-Catholic St Alban the Martyr in Holborn. Often, though, a select band of would-be opera singers don't/doesn't band together very well.

I didn't know about the Romanians - I'll give that a try. And we were actually going to New College on the Sunday, but the 'season' had already ended there - as, I guess, it might have done at Magdalen.

Mendelssohn's _B_-_Minor_ _String_ _Symphony_ has been part of my celebration of is birthday for many years, and usually preceeds, before the _C_-Major_ _String_ _Symphony_, my annual playing of the _Lobgesang_, which always ends the main observance, though I have added the _Athalie_ _Music_ on the following day in recent years before embarking upon Handel for much of the rest of February. As I wrote in my first comment here this morning, I look forward to Sir Mark's performance of that great, for me, symphony/cantata at the Proms, and hope that Sir Mark, having worked with the OAE, will see fit to give us an historically-informed account of the score, and will not excessively draw out the opening verse of "Nun Danket Alle Gott," as some, if not many, seem to do, though I hope he does not go off to the other extreme either, but will trust Mendelssohn's metronome mark if the Albert Hall acoustic will allow.

p.s. I was looking forward to hearing Mr. Peter Auty for the first time as an adult in this performance, but I read that there has been a change in tenor soloist.
And I must apologize for the redundant repetition of Sir Mark's name above.