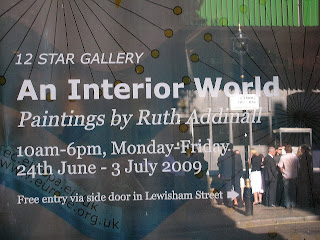 You have five days left to see Ruth's show in the 12 Star Gallery of the European Commission - and six days to listen online to my BBC Radio 3 Discovering Music on Prokofiev's Fifth Symphony. Since several folk have asked me, that American voice you hear at the beginning and then announcing his own performance is conductor David Robertson. Don't miss the R3 broadcast this Friday evening (3 July) of the BBCSO's last concert of the season with Belohlavek masterly in Mahler's Fifth and cellist Jean-Guihen Queyras playing Haydn, extolled here. On Thursday you can also hear the previous concert, including another gem of a Queyras performance in the other Haydn concerto. Both events are remembered with special fondness by the players, though with the proviso that since they get through so much music, it's inevitable that they tend to recall recent happenings most vividly.

In all the hurry to get something posted about the Proms Out+About day, I didn't have time to mention that I had to rush from the Addinall opening on Tuesday to the City Lit class featuring the BBC Symphony violas. Only connect: Ruth's a fine violist, many years ago played in the National Youth Orchestra and is now part of an erstwhile quartet, presently trio, in Edinburgh. So when she asked me the names of our BBC visitors, and I started with Carol Ella, it wasn't surprising to learn she knew her from St Mary's Music School, where Ruth recalled Carol as a real firebrand of an animateur, arranger and organiser, which isn't surprising, and Carol later remembered Ruth as a strict teacher very insistent on her practising, which is.

Well, it won't interest most of you reading this to know who was who at the show, so I'll just leave a couple of shots, one of Ruth - who will NOT look at the camera - beside the 'Fantasy Garden' we love so much 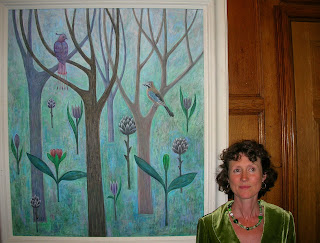 and another of a wall at the exhibition, so that if it's the sort of thing you like, then you'll be enticed, and if not, well, that's the subjective nature of art for you. 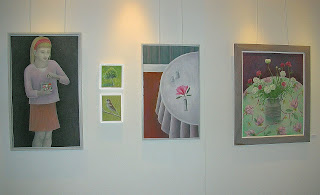 After her London airing, Ruth will be exhibiting at the Flat Cat Gallery, Lauder, from 16 July to 16 September.

Cycling to and from my Thursday engagement in London Bridge, I managed to catch two of the Out+About events. On my way, I dropped in to the Natural History Museum to catch a string trio from the orchestra - Anna Smith, Kate Read and Michael Atkinson - playing in front of an ancient bird. 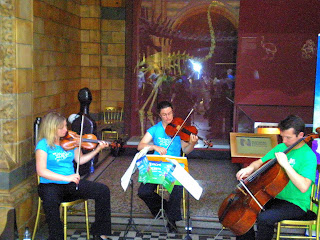 Close to, they could only be overheard, but the sound projected well to the upper levels of the museum's Victorian splendour. 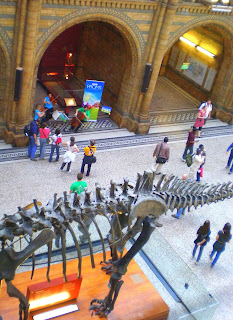 After I'd gone, they posed for the professional, Simon Jay Price, in front of the big diplodocus skeleton, a photo opportunity too good to pass by here. 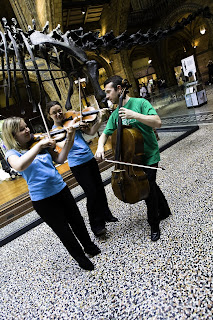 At 7, the entire orchestra fitted easily into the vast space of the newish Westfield Shopping Centre, Shepherd's Bush. Having been steeped in the consumerist nightmare of the Glyndebourne Hansel and Gretel the previous evening - reviewing it on DVD I liked the energy of the whole even more than I had in the theatre last year - I was ill disposed to the Westfield's massive glitz, but the orchestra humanised it and the crowds who came to hear stayed for the whole concert instead of drifting. 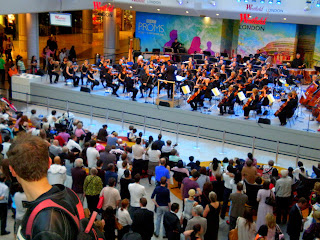 And even above the Westfield, summer evening skies can take one's breath away. 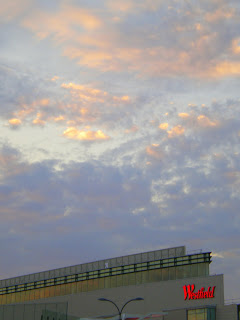 Again, a high percentage of pops were appropriate, and the arrangements were good, providing virtuoso roles for that marvellous pianist Liz Burley, here a Harry Potter-ing celesta, and one of the world's great harpists, Sioned Williams. Both have visited the class, and we adore them. 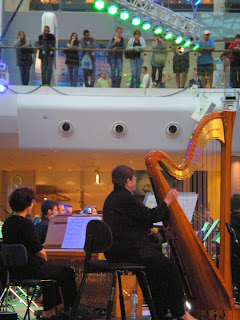 But there was also gravitas in the shape of Handel's Dead March from Saul, its framing percussion tattoos thundering around the Westfield to alarm the security guards, and the lucky shoppers got - and listened attentively to - the whole of Britten's Young Person's Guide to the Orchestra. Isn't this one of those rare pieces which satisfies on every level? It's scheduled as part of a free Family Prom on 26 July.

Which reminds me of another countdown - only 19 days to go before the biggest summer music festival in the world kicks off. For most of us, of course, it's business as usual, but there's always the hope that these much-publicised and streamlined concerts will lure casual listeners into the rest of the season. Children, especially, are now being targeted with 'hear what noise a hundred-piece band can make' instead of just 'let's make a piece with the tongs and the bones', worthy though that is. If we want an audience for tomorrow, getting kids to listen as well as to play is the sort of work we need - and the BBCSO is doing it in spades.
Posted by David at 09:46

I was very interested to read the blog entries about valve amplifiers, as I am glad to find that their superiority over cold, sterile transistor or "solid state" amplifiers, ie.your average Meridian, Cyrus or Naim amplifer, is becoming widely recognized. I haven't heard Italian Unison Research amps though I know of them by repute. The one I would recommend is the Australian Melody Research amp, which comes either as an integrated amp or as a separate pre- and power amp(in much the same way as the British firms Quad or Leak do).
With regards to cost - they start at about £2500 and go all the way up to bespoke(£20,000+), but it is possible to buy one secondhand from a reputable dealer for £1k. I am a secondary school teacher, by the way, not an employee of the company.
Regarding your previous bloggers about analogue vs digital-the Government proposes to shift FM and AM to DAB, which is far inferior to other forms of digital broadcasting,such as radio through TV freeview, and has actually been rejected by countries like France, Denmark and Israel for being inadequate as a national carrier of high quality radio stations.
Yours etc
Michael Jenkinson

again from Michael Jenkinson
By the way I enjoyed your Discovering Music on R3 yesterday, because while it was detailed you didn't get too technical and abstruse that "members of the public"(you know what I mean" - and I am one of them when it comes to musicology) quickly lose comprehension because they do not understand terminology. Well done.
Michael Jenkinson

Well, thanks, Michael. And I'm grateful to y'all for making valve amplifiers and aspects of the analogue/digital debate comprehensible to a technical layman like myself - not that I started it...

From Alasdair Phillipson
The other really excellent valve amplifier to look for is the British company EAR series, designed by Tim de Paravicini, widely considered to have created the valve renaissance which your other blog entries have mentioned. Expect to pay anything from £4k to £25,000, but they are really excellent. I listened to CDs on an oldish Revox player through a starter model EAR integrated amp and Monopulse loudspeakers and thought it was the best sound I've heard in years.
By the way, I too DO NOT LIKE DAB - it is an inferior system capable of carrying limited amounts of musical information, unlike the present day analogue, which is able to carry lots.
Alasdair Phillipson