Yes, the Cardiff Singer of the World 2009 is Yekaterina* Shcherbachenko, shining with emotion in this very promptly-despatched photo by Brian Tarr. And it might seem excessive that this is the second time she's led here, too, but she's been rather a leitmotif of the week. You’ll know by now that she was my favourite because her Tchaikovsky Letter Scene in Round Two ended up being the most complete characterisation out of everything I saw: as I wrote then, she WAS Tatyana. But she didn’t, as I’d hoped, choose Prokofiev’s Natasha for the final: in fact she didn’t choose any of the Russian roles, in the diction of which she is so perfect, at all – only a Russian composer setting an English text, Stravinsky with Anne Trulove’s aria, a real gamble.

Yet she showed almost the same identification with the characters, seemed to warm to the public lovefest and gave a masterclass in the delivery of Liu’s ‘Signore, ascolta’ – I can’t recall seeing a performance of that aria which was as disciplined and varied as it was moving. Click to see a little slice of perfection back on the BBC Cardiff Singer of the World website.

Spot-on mezzodiva-commentator Susan Graham (great choice) pointed out that you could see Shcherbachenko bracing a little nervously for the top C at the end of ‘I go to him’, but she pulled it off in terms of dramatic expression. And as Mary King added, it's apt if there is a touch of anxiety in Anne’s determination. Yes, the language was a bit weird, as was the French for Gounod's Marguerite, but who cared when she communicated so much?

The runner-up? Yury Mynenko has a golden sound, the fast passages were more agile than I'd anticipated from the earlier ‘Parto, parto’ and it’s so good to hear a butch counter-tenor. Call me biased, but I'm still not sure how far can you go, and how much of the gamut you can run, in that rep.

Himmel, Tod und Wolkenbruch!** That mischievous doyenne La Cieca has unearthed a piece of filth, as she calls it - filthy not so much in the vocals as in the arrangement - in which Mynenko sings a (transposed) Queen of the Night aria 2 with throb-pop accompaniment (remember the RPO's 'Hooked on Classics'?). I'll link to it on our counter-tenor's audio page - just go down to the penultimate entry, where you can read 'Der Holle Rache' - in case you wish to correct it with some of Mynenko's more distinguished efforts.

By the way (22/6), several folk have asked why I didn't mention bass Jan Martinik as winner of the Song Prize - alas, I missed that final when it was broadcast and we were away in Switzerland when it was shown on BBC4. I'm sure the sometimes undue sensitivity he brought to the operatic rep (the Aleko-lite, for instance) would have suited Lieder better. So I look forward to hearing him in recital - and to his Filippo in, say, fifteen years' time.

Does it really matter who wins, though? How, for example, were the jury for the Tonys going to choose between Harriet Walter’s QE1 and Janet McTeer’s Mary Stuart (pictured below by Joan Marcus, courtesy of the super-efficient Boneau/Bryan-Brown Inc.) in the electrifying Donmar-in-New-York production of Schiller’s royal tussle? 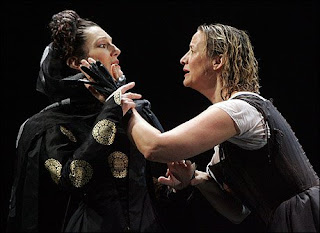 Both were nominated for best actress; neither won, and since I haven’t seen the other ladies in their roles, I can’t say whether fairly or not. I do know that while McTeer’s Nora in A Doll’s House will remain one of my Top Theatre Performances of All Time – and it DID win a Tony several years back – she had a few mannerisms as Mary, at least in London, which might have inclined me to give the palm to Walter. Elizabeth in any case has a more difficult job winning sympathy at a late stage in the play.

Too often, we’re asked to compare incomparables, and never more so than in the Cardiff final. Each of the round winners seemed to me the only possible choice, and actually in terms of total communication, Shcherbachenko’s radiant and vulnerable trio of heroines clearly had the edge in the finale. But is it quite fair to judge between a 21-year old Italian tenor fresh from his studies (Giordano Luca, winner of the audience prize), who may not seem to grasp his own language very vividly but who has the tone and the money notes to be snapped up all over the world, and a Russian soprano of 32 with experience of singing Tatyana at the Bolshoy, the Vienna State Opera and in Paris? Well, it doesn’t matter: all five finalists have major careers assured where not already established. And Elina Garanca didn’t win several years back, but she’s one of the favoured few now.

More on awards (which makes me wince a bit, but at least I never had to sound off about the Classical Brits). I ought to have made a nod in the direction of my occasional master BBC Radio 3, winner of four ‘golds’ at the Sony Awards some time back. In terms of ‘UK Station of the Year’, yes, I know, it’s a question of rotating the honours – the fact that Classic FM won a few years back renders it pretty meaningless – but it does mean excellent publicity for a station that’s pulled out all the stops recently.

The ‘Music Special Award’ is rather more auspicious. I know my pal Stephen Johnson is over the moon that his Vaughan Williams journey ‘Valiant for Truth’ won over contenders such as Coldplay, and so he should be. Here he is on what might be a VW excursion but isn’t, at White Castle on the first stage of our Offa’s Dyke walk. 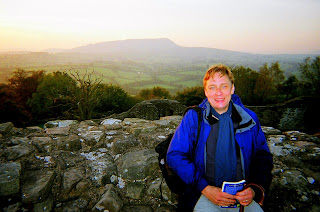 I’ll end with a couple of plugs before bowing out for a bit. The Discovering Music on Prokofiev’s Fifth Symphony I recorded with David Robertson and the BBCSO finally goes out on BBC Radio 3 on 28 June, and adored Ruthie Addinall brings some of her paintings to the 12 Star Gallery for two weeks from 23 June, including this one. 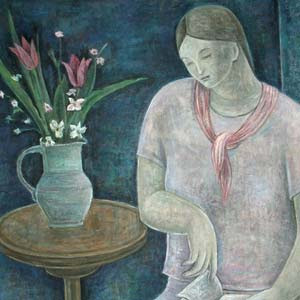 *Sorry, BBC, again I insist on the 'y' being sounded. Who says 'Evtushenko' these days?
**The oath of the Acrobat in Berg's Lulu. In the ENO translation, it was rendered 'bugger, bugger, bugger it!', which resulted in an odd piece of censorship when I reviewed the Chandos set for R3's CD Review. I wanted to play Lulu's entrance in Act 2 Scene 2, but because this was morning air time, we had to come in a little later than I'd hoped and Robert Poulton's acrobatic curses went unheard...
Posted by David at 21:59

from Philip Pendrous
Dear mr Nice
As a Radio 3 broadcaster what do you think of the BBC's decision to switch off all analogue(ie.non-digital)radio broadcasting in 2015? The vast majority of radio 3 and 4 listeners do so through analogue radios, which will be quite useless if the analogue signals are closed down. I have an analogue radio in each room of my largeish house-it would cost a fortune to replace these with digital radios. I do respectfully hope that radio 3 and 4 broadcasters both staff and freelance complain loudly and clearly about this decision
Sincerely
Philip Pendrous

I can understand the dismay of all those with analogue, but if it's any consolation the change is some time ahead. Personally I don't know why we can't have both, but I must admit I haven't looked in detail at the pros and cons.

For me, digital radio has been a blessing for one thing in particular - the BBC World Service, which was very difficult to pick up where I live in analogue. And I must say it's a pleasure to hear R3 concerts without background interference - though sometimes the digital broadcast could/maybe still can be rather constricted by comparison. I don't know whether you have any experience of comparing the two?

Dear Mr Nice
the reason you cannot have both analogue AND digital is because analogue wavebands take up too much radio space(I am not a scientist but this is what I was emailed by a BBC press officer). I have tried digital at my daughter's house and found it clear if lacking presence, especially on Radio 3. My main stereo has a state of the art Quad tuner(analogue), which goes through an Italian valve amp and Tannoy Westminster speakers, and that is definitely better than any digital programme I have encountered. There are according to BBC estimates 35 Million analogue radios in Britain - the cost, financial and environmental of disposing of such a vast number will be high
sincerely
Philip Pendrous

Thanks for filling me in on that - I'm a little hazy on the practicalities of such things. It does surprise me to learn that the majority of Radio 3 and 4 listeners are (is?) still listening through analogue. The statistics do seem to indicate that.

From Andrew Schering
May I add my farthingsworth? I do have a digital radio, and there is only one room in my house where the reception is adequate. In our kitchen I have to stand on a chair with it to get any decent sound at all - hardly practical. In a recent double-blind test of audio critics for high-end equipment(double-blind is when BOTH researchers& critics dont knowwhich sound source is which, to avoid the researchers unfairly altering aural conditions), seven out of ten critics preferred analogue to digital. I rest my case
Andrew Schering

from Ian Donaldson
re Mr Pendrous
I also like Mr Pendrous listen to analogue radio through an Italian valve amp, which is brand new, by the brilliant Milanfirm Unison Research, with a lovely Murrano glass fascade. I got it as ex-demo and cost £4,OOO. The analogue tuner which I use for it is the British Rega Radio 3 and set me back just under £400. It is definitely better than the digital tuners which I tried, some of which were pricier, none of which were much good in comparison with the Rega tuner/Unison Research combined. I personally doubt that the Government will get the BBC to do this(at the moment it is still only a government review or proposal, not a BBC one). Anyway, a change of government might bring the thing to a stop anyway
Best
Ian Donaldson

Well, that's fairly definitive. Thanks, Andrew. I can only repeat that some of the digital broadcasts from the Proms over the past few years sounded distressingly shallow. But it's very variable. I should add that we only have a very plain digital radio in the bathroom, for the purposes mostly of listening to the World Service.

Clarifications coming thick and fast from more knowledgeable folk than me on this issue.

I reckon we have to worry more about the licence fee issue. I can't see Radios 3 and 4 going under, but a battle lies ahead, and soon.