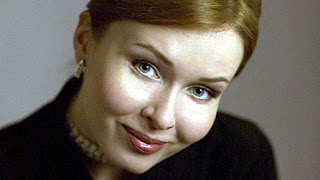 Adapting words from Pushkin's famous letter, and following up yesterday's ecstatic footnote, I offer a photo of the latest Tatyana incarnate, Yekaterina Shcherbachenko, from the BBC Cardiff Singer of the World Competition 2009 website. Oh, and slava Bogu, they're showing the complete Letter Scene - not just the half we got on BBC4 - here. I failed to mention below how fluently Lawrence Foster and the BBCNOW worked with her, and she with them - a real partnership; many folk may have overlooked conductor's and orchestra's role in her success.

Forget the GMTV woman last night who gushed that experiencing this, the evening's winning act, was like taking a warm bath with candles, after which she'd happily go to sleep; many of us were bouncing off the walls, just like Tchaikovsky's teenage heroine.

How is that so many Eastern European and Russian sopranos (Vishnevskaya, Benackova, Prokina, Gorchakova, Kovalevska, Anna Samuil, now Shcherbachenko) - and the odd westerner (Boylan and Roocroft, at least in the Pimlott production) - find so much truth in this music? It can only be that the composer identified completely with Tatyana's yearning.

Big question now is: what can Shcherbachenko sing in the final? Is she allowed to repeat this? Because nothing can go deeper in its effect. I see she's also sung Prokofiev's Natasha, Tatyana's offspring, at the Bolshoy; maybe she could give us 'What right have they?', Natasha's aria of longing for the absent Prince Andrey from War and Peace Scene Three. I'd love to see Shcherbachenko in the role: she'd surely be the most heartrending Natasha since Prokina. No, I haven't forgotten Netrebko: despite Hepburnesque looks and lively acting, she didn't sear my soul.

One polite request famously made by audition panels, 'did you bring any Mozart?', shouldn't be heard on Sunday, though.

11/6 Now seen the next round's obvious top choice, Yury Mynenko - big virile Ukrainian male soprano (rather than the usual counter-tenor). Robust, but on the evidence of the 'Parto, parto' runs, may not be agile enough for a lot of the rep he has to sing. Stands a real chance of winning, though, for various reasons.
Posted by David at 10:39

There's a tiny bit of her Natasha here on YouTube.

Thanks for that, Rostova: I'd found it. At least we get a little of Scene 3, though difficult to tell if she's going a bit flat with the difficult upper-range stuff. But the diction is beautifully clear.

this is apropos of nothing but I enjoy reading your blog and also hearing your Building A Library on Radio 3. I would like to pick your brains(I am a layperson when it comes to classical music but am keen to learn more) - what do you think of John Eliot Gardiner's recording of Beethoven symphonies for DGArchiv, released about 15 years ago? I have enjoyed listening to them enormously yet I have heard so y critcs knock them for their iodiosyncracies, waywardness etc. I would be grateful for your comments
sincerely
Philip Pendrous

Greetings, Philip. I'm perhaps not the best man to ask about JEG's Beethoven, as I haven't heard every performance, but the ones I've heard, both live and on CD, lead me to think he does the shock of the new in the earlier symphonies better. Later I miss a sense of the longer line.

That, I think, you get with Abbado (both Berlin cycles) and Haitink (the recent LSO Live set has some wonderful performances). Mackerras strikes me as getting the best of both worlds - a certain authentic approach and a modern symphony-orchestra sound.

JEG of course I admire in Bach - discovering the cantatas with him has been a great experience. I wish he'd stay clear of late romantic and C20. Again, I miss the line and the rubato.