There can't be many things more pleasurable than taking a dip al fresco before going on to see a show. In fact, I'd go so far as to say that there's nothing finer than swimming in a lake, period - no mighty ocean fan I, since I like to go swimming with my glasses on, and I've been a bit nervous of big seas since a rogue wave turned me upside down in Kerala and sent my specs far out (a new pair were swiftly and cheaply supplied by Rose Opticians of Trivandrum).

So Zurich in a brief heatwave was the perfect place to be. How civilized to locate a city on a lake - seen above with the Opernhaus on the opposite bank - and how public-spirited to make sure that all the shore around it is open to the entire population in a series of finely-landscaped parks. A plunge off the Arboretum may not quite have matched the solitude of the waters and islands at the back of my Savonlinna hotel last year...


...but this was more sociable. Lottie Horsman, fairest chorene of the Zurich Opera and the mother of two of our goddaughters, joined us with neighbour and best friend Anne Glaskin - cakemaker supreme to assorted Zurich pastry-shops - and we swam before testing out Anne's latest high-choc-content brownies. If you doubt it, here's ocular proof - Lot in the foreground, and me swimming a short way out (along with the duck). 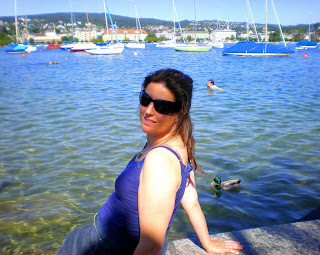 The 'sexy airs of summer' certainly seem to have unbuttoned Zurich's protestant work ethic, though I have to say that the gilded youth around the lake were mostly an international crowd. And I wonder if the kind of crimes of passion committed in the operas we then went to see would happen here.

Anyway, it was blood, sweat and high-quality casting in Zurich Opera's Cav 'n Pag. Not sure I would have sought this out had it not happened to coincide with our visit. Memories of Richard Jones's ENO Sicilian-zombie-village Cav and superlative 'Ding, Dong' of a Pagliacci were not likely to be eclipsed by Grischa Asagaroff's safe 1920s Sicily and 1950s circus. Colourful though the Pagliacci ring undeniably was, Leoncavallo's down-at-heel travelling players surely wouldn't have run to lavishly-attired acrobats and stilt-walkers.

Still, ENO hadn't quite cut the mustard with its tenors. Here Jose Cura took on both Turiddu and Canio (all production photos copyright Suzanne Schwiertz for the Opernhaus). 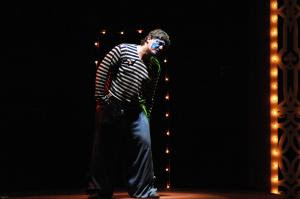 I was expecting the rather rough performing style I remember from the Royal Opera Fedora - didn't see the recent Fanciulla revival at Covent Garden - so was pleasantly surprised to hear Cura singing well within his means, a little careful with a fastish 'Vesti la giubba' and 'No, Pagliaccio non son', but letting rip in the last two minutes of the commedia and bringing tears to the eyes in Mascagni's 'Mamma, quel vino e generoso'.

He had excellent leading ladies. The Santuzza, Paoletta Marrocu, whom Lot's fellow chorus-singers remember as an outstanding Turandot and Lady Macbeth, also negotiated her phrases with musicianly care, but flashed danger at key points. I guess I'm so hooked on the Suliotis wildness that I expect the soprano to sacrifice her voice on the verismo altar of blood, but Marrocu did an excellent job. Ashagaroff actually staged the ex-lovers' confrontation rather sensitively, suggesting that Turiddu is still half-attached to his Santa, only to be scared away for good when she reveals her pregnancy. 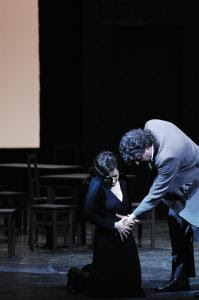 I've long wanted to see Fiorenza Cedolins in action. Her Nedda was vocally a little blowsy, but that fitted with the characterisation, and she's a compelling stage animal - could have come straight out of Fellini. Her duet with Silvio, which usually has one wishing it were over soonest, was a real high-point, thanks too to barihunk Gabriel Bermudez; his piano singing was as convincing as his full-pelt Latin anguish. 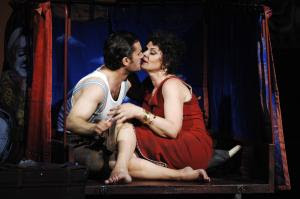 Bermudez, who's been a house baritone in Zurich for a few years now, was a real discovery, and not merely in the looks department. And it was rather a relief to hear a youthful baritone after the sometimes ragged tones of Carlo Guelfi's Tonio.

The evening's real weakness, though, was the conducting of Stefano Ranzani. Some lovely sounds were to be heard from the youthful Zurich Opera Orchestra, especially the lower strings rumbling signals of distress in Cav and the subtler colours they found in Pag. Yet Ranzani rarely co-ordinated well with either the soloists or the chorus, and had a peculiar way of missing the right nodal point of Italianate climaxes. It should be a different matter if the man appointed Welser-Most's successor at Zurich, Daniele Gatti, ever takes on this double-bill there.

Afterwards we joined several ladies and a gentleman of the chorus for a drink with the friendly Cura, much brighter and more articulate than your average tenor. Singer, conductor, composer, newly-published photographer: what other strings can the ambitious Argentinian add to his bow? I'm glad he's in such good vocal health now, anyway. Here he is with Lottchen.


As for other music in Zurich, the city has just embarked on a big anniversary Mendelssohnfest, and Felix's sensitive features are to be seen on posters around town. 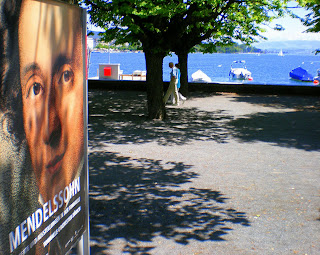 We could have caught a Reformation Symphony in the Tonhalle, but we'd only just come back from the mountains. And Sir Roger was the conductor, so I thought I might as well wait to see what Yannick Nezet-Seguin makes of it at the Proms.
Posted by David at 13:07

Regarding the comments made about analogue and digital, may I point out that it is because of the very high quality of signal of FM and AM, particularly the stereo FM that they are to be closed down. Quite simply, they take up too much of the radio spectrum-which is limited and which the Government wishes to use for computer broadband expansion across the whole of the country. By getting rid of FM and AM, large parts of the radio capacity are then made available for internet/broadband expansion. By the way, this is at the moment only a Government green paper, not white paper(ie.it is at the moment only at a consultative, not legislative stage)
sincerely
Alice Mary Horsman
alice.horsman@yahoo.co.uk
(a physics graduate, some years ago)

Can that be pure serendipity, that you bear the same surname as Lottie Horsman, heroine of the above entry? I don't suppose you're related...

Dear David Nice
No relation of Lottie Horsman, I'm afraid. Both my father and his father were, unusually for the time, only children, so the number of people with that surname in my extended family is very small. It is a not uncommon name - Debbie Horsman, the financier/economist is possibly the best known. Referring to one of your other bloggers, I have heard h-fi equipment using valve amplifiers, and the sound was wonderful; very warm, with great presence. The only problem is the sheer cost of purchasing one, but if I had lots of money I would certainly do so.
with good wishes
Alice Mary Horsman