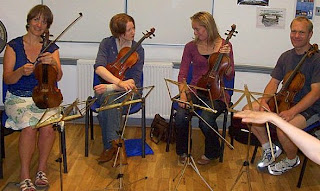 It's begun: the BBC Symphony Orchestra players are whizzing around town from one public venue to another in their now-annual Proms Out+About day, culminating in a free evening concert given by the entire band in the Westfield Centre. I well remember the event last year among the Elgin marbles of the British Museum.

One of the more unexpected groups you might catch is a viola quartet - there are several within that lively department. Last year, when my Inside the BBC Symphony Orchestra course was running at Morley College, we had a visit from four ladies, playing everything from Telemann to a consummate arrangement of 'When I'm 64'. On Tuesday one of them, the indefatigable Carol Ella, brought three other distinguished players to the City Lit. Carol is second from the left in the above picture; the others are co-principal Caroline Harrison, who's given so many wonderful solos with the orchestra, Carolyn Scott and Mike Leaver. Plus the arm of an enthusiastic student.

As their programme today will be mostly pops, they gave us a preview and surprised us, among other things, with an artistic slant on the Harry Potter theme (sounding a bit like Prokofiev) and exuberant glissandi in Sousa's Liberty Bell March - not necessarily best left to this lot on the Out+About: 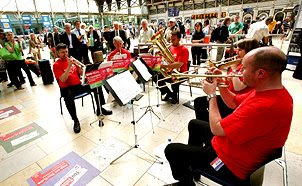 Witty and articulate, our quartet folk are a far cry from the viola butt of many a cruel joke - in fact I reckon viola-players generally are true individuals, even if they know how to work together as a team. For a start, they take their own coffee and percolators to counter the disgusting stuff at Maida Vale, and - perhaps more important, though not if you're a caffeine addict as I am - they're teaching other members of the orchestra their craft. I'll hurriedly leave off with a touching anecdote of the trombonist, soon to retire, who's learnt to play the viola in an amateur orchestra in his spare time so that he'll be able to continue and not feel uncomfortable among amateurs with 'his' instrument.