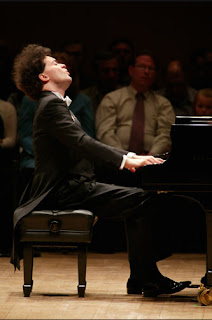 Idolised Yevgeny Kissin, seen here as captured in action by New York photographer Chris Lee (whose 2009 copyright this is), came to the Barbican on Friday. He brought with him a programme daunting even by his lofty standards. Inevitably I was keen to know how he’d rise to the emotional challenges of Prokofiev’s Eighth Sonata, in my skewed view the greatest 20th century work of its kind. For an alternative take - Prokofiev as 'an eternal wunderkind whose attempts at maturation were overshadowed by his youthful facility', my foot - I don't know how much credence should be given to Steve Smith in the New York Times, reviewing the same programme (with one different encore) at Carnegie Hall. Anyway, I also wanted to hear Kissin live in Chopin, the composer with whom his lucid style has gone hand in glove since his precocious childhood.

There’s a golden-mean poise and clarity which makes him second to none in Chopin’s most aristocratic utterances. No-one who heard Kissin on Friday should forget his way with the fast-multiplying trill at the heart of the Polonaise-Fantaisie, the space given to articulate mazurka rhythms and the ease with which he persuaded us that the strange tailing-off of Op. 41 No. 4 was the only way it could end. He’s such a master of connecting a sequence that I wished he’d given us one complete set of Etudes rather than a selection from both. Still, the tone-colour of his technically flawless, stupendously even Op. 10 No. 2 was a little miracle, replicated in the G sharp minor Etude of Op. 25.

When it came to Chopin’s more tumultuous minor-key explosions, though, didn’t the transcendental technique work against a sense of struggle, of psychological effort? The eager audience applause between numbers suggested approval of Kissin's virtuosity rather than stunned submission to leonine combat. You couldn’t really accuse him of anything mechanical in his delivery, yet there sometimes seems to be just a fraction more of expressive urgency waiting to be unleashed. As a person, he still comes across as the slightly dazed child I interviewed in Colmar all those years ago, with mama in tow and a disconcerting habit of letting off internal squeaks between sentences.

I found the same dichotomy in the Prokofiev half. The three Romeo and Juliet pieces, later to be nicely balanced by three encores, were fluent exercises in dramatic contrast: Kissin began the recital audaciously with a crystalline performance of ‘Juliet the Young Girl’ worthy of Prokofiev’s own crisp but never too dry delivery as pianist. The Eighth Sonata would eventually cry out for the kind of soul-baring which Kissin seems reticent to provide, though it began hauntingly enough, retreating into timelessness as those mysterious distant bells sound before the whirlwind development. I liked the way the minuet’s bittersweet dreams, slow-gaited but with the most magically withdrawn playing in the descending chords of the second episode, followed on the heels of the first-movement tragedy. The last bars of the finale, its turn from implicit playfulness to violence rigorously charted, seemed to pose a challenge even to this pianist.

It was a fine and serious interpretation by any standards, but maybe I’m just hard to please because Richter in the Eighth happens to be a Desert Island Disc – the only Prokofiev I’d take with me if limited to the usual eight. 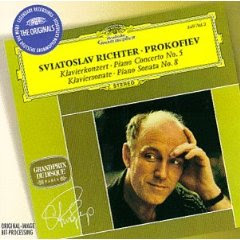 There are actually nine Richter Eighths to choose from, including a BBC Legends release of his London debut. It has slightly different virtues and comes with a Haydn Sonata, Prokofiev Second and a wider selection of the Visions fugitives. I felt privileged (no, really) to write the liner notes for this one. 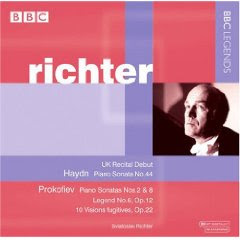 Kissin’s recital was full of unforgettable details, but I don’t suppose I’ll look back on it as I do Richter’s Chichester Cathedral recital, including his Schubert of heavenly length, Prokofiev Fourth Sonata and a Shostakovich Prelude and Fugue by way of encore which tied in supernaturally with the striking of the cathedral bells. 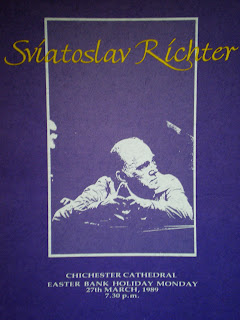 The programme tells me that twenty years have passed since that greatest of all recital experiences. But I’m liable to get even more waffly over my favourite pianist than I have been about Kissin, so I’ll stop there.

Quick update: I see that Russia's longest-serving opera and theatre director Boris Pokrovsky has died at the age of 97. In later years his Bolshoy spectacles had come to seem a little ossified, but he certainly made some daring choices in Soviet times. I enjoyed his Moscow Chamber Theatre production of Shostakovich's The Nose when it came to the Brighton Festival, and he could still come up with a striking piece of iconoclasm, staging Schnittke's Life with an Idiot in Amsterdam (a baffling but intriguing premiere). I've not yet come across a UK press obit, so as with Maw the New York Times leads the way.

By the way, the Royal Opera's Lulu waits to be dressed here; her appearance will depend on whether they grant a few images. Materialise in some form, though, she will, and let me say right now that I found Christof Loy’s controversial minimalist production more challenging than alienating. More anon.
Posted by David at 11:14

By and large, I agree. Can you tell me what was the last encore?

I have to admit we were racking our brains about that one - Schubert, certainly, but transc. by whom? Tausig, Godowsky, Liszt (or even Prokofiev, though I know his Schubert Waltzes don't sound like that)? It was Liszt - his Soirees de Vienne No. 6.

Delighted of your comments on ROH´s "Lulu"!
It might interest you, that there will a DVD released of this production.
Greetings
Thomas Wihelm

Thanks, Thomas. A fuller commentary followed. I think I wrote then - or elsewhere - that film would be ideal, because one needed to see all the facial nuances in close-up. I very much look forward to seeing it.