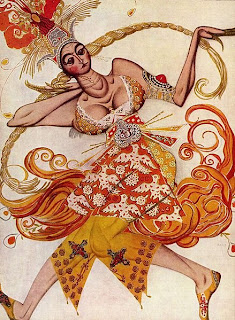 Stravinsky ballets with the students on Tuesday evening, a whistlestop tour from Z to A – that’s to say, from Zhar-ptitsa (Firebird to you), pictured above in Bakst’s wacky costume design, to Agon. Why? Because the Proms are showcasing them all (or nearly all – don’t know why the effervescent Danses Concertantes got left off the list). Why, again? Well, this is more confusing. We’re currently celebrating the centenary of the Ballets Russes’ first season. But it wasn’t Diaghilev’s first venture in Paris – that testing of the western waters happened in 1908, with Chaliapin in Boris Godunov. And 1910 was the year in which The Firebird flamed on to the Paris Opera stage.

Never mind. The real problem is that the ballet companies, in the UK at least, have only come up with the usual Ballets Russes suspects. Perhaps that doesn’t matter too much. These days, every year seems to be Diaghilev year; and it’s only right that the Royal Ballet should feature Les Sylphides, which first appeared in Paris exactly a hundred years ago this Tuesday. Did you know that Stravinsky orchestrated two of Chopin’s numbers in 1909, his first work for the company? His Grande Valse Brillante occasionally crops up as a surprise encore. 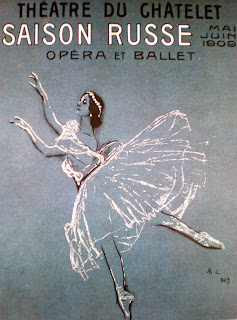 The poster, designed by the great Valentin Serov and featuring Anna Pavlova, is illustrated in one of the most beautifully produced, if unwieldy, books I’ve ever come across, Russkiye Sezoni v Parizhe (Iskusstvo, 1988). I asked my friend Sima Romashova to track a copy down in St Petersburg many years ago, and she came up with the goods.

While I’m glad so many people get to see the endless recreated Firebirds, Petrushkas and Scheherazades in the rep, there are still quite a few rarities in need of resurrection. You might have guessed the one I’m canvassing: Prokofiev’s Chout or The Buffoon. It’s a nasty folk tale set to a score along Petrushka lines, if rather more long-winded. Elements of the plot include a trick which leads to seven wives beaten to death, and the hero dragging up only to replace himself with a goat when caught in an awkward nuptial clinch (the goat dies, too). When I met Millicent Hodson at the Prokofiev Foundation's 25th anniversary party before the Mark Morris Romeo and Juliet last autumn, she told me she and Kenneth Archer had been reconstructing the original Larionov designs in the hope of persuading a dance company in America or the UK. Here’s their joint work on the Buffoon and his Wife. 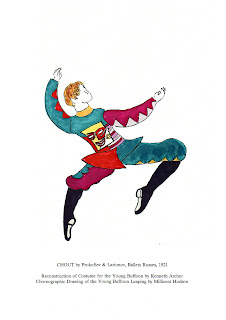 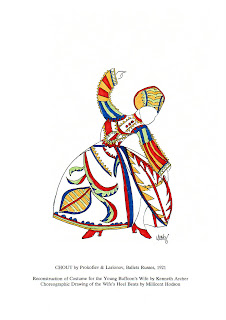 The costumes weren’t a great success in 1921, apparently; the heavy headdresses for the Buffoonesses hampered movement, and in any case also-ran Taddeus Slavinsky’s choreography was by all accounts sketchy. But it would be good to see Larionov in action again. Otherwise, Chout would be an ideally quirky candidate for a makeover by Matthew Bourne. And word has it that a new version of the ballet is currently being choreographed by Alexey Miroshnichenko for New York City Ballet’s 2009-10 season. In the meantime, Prokofiev's post-Diaghilev ballet for Lifar, On the Dnieper, is now to be seen in New York (American Ballet Theatre, choreography by the often very inventive Ratmansky).

Coincidentally, I came across this Larionov depiction entitled ‘Le Clown’ on the website of a Bond Street gallery, currently hosting an exhibition of priceless Ballets Russes paraphernalia (though only until 12 June, so I must hurry along). The image comes courtesy of Julian Barran Ltd. at the Daniel Katz Gallery. 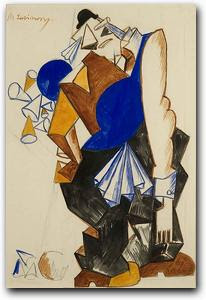 As the date is 1915, the year in which Chout first came to life, it’s reasonable to assume this is yet another spin-off from the ballet.

In the meantime, if you’ve just missed Fokine’s quaint and pretty choreography for The Firebird in action at the Royal Opera House, you can see a very good performance on this DVD, coupled with the indispensable Les Noces in its still-radical ritualisation by the inspirational Bronislava Nijinska. 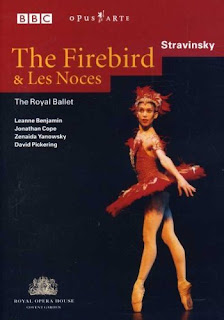 An oddity worth noting – I loaned this treasure to a friend, who promptly bought a copy and gave me what I thought was mine back. And then I wanted to show a class the bonus item, the octogenarian Stravinsky conducting the 1945 Firebird Suite at the Royal Festival Hall in 1965, an event in which his grinning reception of the ovation is as memorable as the performance itself. It was nowhere to be found. Turned out that Opus Arte had clearly been forced to remove the concert film, owing no doubt to copyright reasons, and that my friend had accidentally given me back his more recent, and less generously-filled, copy. Well, that’s a loss, but the ballet double-bill is still very much worth having.

And now I'm happy to announce that, as a Lib Dem virgin, I'm off to vote for Sarah Ludford & Co as MEPs. Irrelevant? Not entirely: didn't Diaghilev's ever-changing and evolving agenda help to cross-fertilise all that was best in the European cultural scene? And can you imagine how staggered a parochial London was when the Ballets Russes came to town?
Posted by David at 10:54

So, begging your pardon, who made the original orchestration of _Les_ _Sylphides_? I have thus far encountered at least two, the Gordon Jacob, recorded by the then-future Sir Charles and, so far as I currently know, never reissued on CD (I rather liked it), and one by VW's later-years amenuensis, Mr. Roy Douglas.

This posting of yours is indeed timely since, as presumably you know and I found out today, both via my weekly visit to the Askonas Holt Website and the _CD_ _Review_ _Newsletter_,
a new recording of _Sibelius_ _3_ and _6_ plus the Stravinsky _Violin_ _Concerto_, played/conducted by Maestro Zehetmair, has just appeared, and is to be sampled at the beginning of that programme tomorrow morning. I will be interested in your reaction.

The odd composer out is probably Grieg, 14 if I am not mistaken, though Gounod comes either on 17 or 18 as well. If I am not repeating myself, I hope to again mark Stravinsky's with the Gardiner recorging of _The_ _Rake's_ _Progress_, with your mannerismic tenor as Rakewell and Mr. Terfel as Shadow, the latter _MOST_ gripping in my opinion! I also enjoy Miss York's Anne Truelove and Miss Von Otter's Baba The Turk!

With renewed thanks and best wishes,

You've made me check the facts, JV: it's complicated. By the way, I got to know the work on an old ballet LP conducted by Mackerras (the B side was Les Patineurs and Ponchielli's Dance of the Hours).

Chopiniana premiered in St Petersburg in 1907, with numbers orch. Glazunov.

Only one number was carried over into Les Sylphides, which was orch. Glazunov, Taneyev and Stravinsky (apart from the latter, I don't know who did what).

In between there were two MORE Chopin ballets with choreography by Fokine.

That was the very recording to which I referred, the Chopin again having been orchestrated by G. Jacob. _MAYBE_ that _Patineurs_ made it to CD, but regretably, again so far as I know, not the Chopin. I think I would like to have it.

So one wonders why we have these various other orchestrations for _Sylphides_, given that the two orchestrators you mentioned were more than competent, Stravinsky in particular, though I like what I know of Glasunov's as well.

As hopefully you heard, Mr. McGregor liked Maestro Zehetmair's Stravinsky, and he seemed on the mark about the swing, though I think this was my first encounter with the work. He also spoke favourably of the Sibelius, so this could be tempting.

p.s. The _Patineurs_ might be in that ballet collection issued for Sir Charles's 80th birthday.

I was _HORRIFIED_ when, upon receiving my last comment via E-Mail, my reader seemed to be mispronouncing Glazunov's name. So I arrowed through it, and, sure enough, I had misspelled it. And I _DO_ know better! Since again I am unable to proofread while writing in your field, nor to correct when I can do so after writing, I would probably do well to stick to preparing what I wish to write in my E-Mail client, where I _CAN_ both proofread and correct, and then copying and pasting it into your field instead of "winging it" as I often do, I having tried the latter for this very comment and having found yet another "typo" in it.