Mamma mia, here I go again. Looks like I'm turning into Woody Allen's Zelig, muscling in on the world-famous, but honest, this was a good turn for goddaughter Evi, seen in the middle between me and, yes, the real Benny Andersson. And while my star-struck urge to meet Harriet Andersson - see below - might have touched deeper chords, Benny and I go back further. Of course I was the strange teenager who adored not only Mahler and Strauss but also ABBA, Queen and the Carpenters, and was much mocked for it by my trendier schoolfellows.

Well, they who worshipped the more ephemeral are rebuked; the songs of those three have survived. Benny and Bjorn are indisputably among the most popular songwriters of the 20th century, maybe even more often played and imitated these days than Lennon and McCartney; and while the lyrics may not exactly be Cole Porter or Noel Coward, the tunes have huge uplift potential. We wondered about this when ABBAfans in Parliament Hill Fields started swaying their arms high in the air: a gesture, says J, of the aspiring intellect, but more likely just an ethereal response to music that does make you feel lighter and happier.

Let me clarify: this was not 'ABBA in the Park' - that's promised for September, while this event, jointly organised by the Swedes and the City of London Festival with no small input from the European Commission (hence the link through the diplo-mate), featured the magnificent Benny Andersson Band. Just 'a bunch of middle-aged guys', as their instigator put it, but still, hugely talented middle-aged guys palpably enjoying themselves. Typically, Benny is almost in the shade below, playing the accordion on the far right. 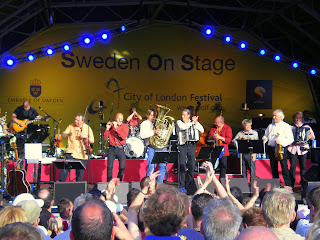 As the very approachable BA tells us in a Torygraph interview, he wanted to recreate the informal feel of a Swedish Volkpark. He and the band played, for an exuberant two and a half hours, everything from folksy Swedish polkas and 'Roll out the barrel' to Shostakovich's Jazz Suite waltz and a wacky arrangement of the Bach flute Badinerie, at one point virtuosically handled by the consummate tuba (frankly I thought his runs sounded better than Lindberg's on the trombone the other day). Min Gud, crossover which works.

There were two vocalists: the jolly, flamboyant Tommy Körberg, who boasted a superb command of ironic English and the versatility to run the gamut from R&R to 'Moon River', and Helen Sjöholm, very big in Sweden as the roars from the crowd told us. Here they are encouraging the hand-waving in 'Hasta Manana', which always used to be the favourite of my sentimental teenage self: 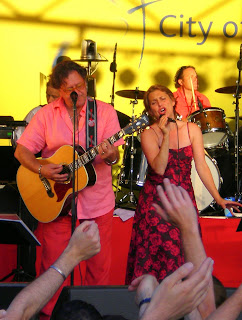 So, yes, there were some ABBA numbers, including a couple I didn't recognise and the hardcore fans did. Some of this has already appeared on YouTube. I reckon that by the time of the ABBA strand, 7.30pm or so, some of the Priders had made their way up the hill from Trafalgar Square; I hope so, for what could be more of a camp treat than ABBA? 'Surely you should have been at Pride', proclaimed a prickly friend of ours who didn't attend either event. I'll tell you why I don't go any more: it's not so much the merchandising takeover as the whistles. They deafened me under Hungerford Bridge one year; and I know a BBC producer who suffered from tinnitus after an ex-boyfriend blew a whistle in his ear on another march. Well, we missed a chance to see a preview of 'The Gay Don', an adaptation of Mozart's Don Giovanni where Zerlina becomes Zac, Elvira an older queen very disapproving of the young's promiscuity etc. Sounds like a bad idea, but never condemn anything out of hand until you've seen it.

No competition, though, between that and the free open-air concert. Evi and I approached it via Hampstead and Kenwood, following our ears and eyes from the heights where the whole of London could be seen from grassy meadows. 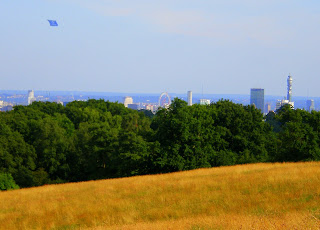 It was a truly happy event - lots of families, good humour all round, much Proms-style bobbing alongside a bit of dancing on what should have been a Volkpark-style wooden stage and not too many people (because the advertising had been quite selective). Glorious weather too, of course - as it has been for the lucky Wimbledonians over the past fortnight (I always know that if I start watching the tennis, I won't stop. And this year I just didn't start. Well done, Roger, anyway). And, yes, the wonderful Harriet Andersson was there, too, having a whale of a time. Nik Westberg of the EC Press Office, another Bergman nut, took this picture 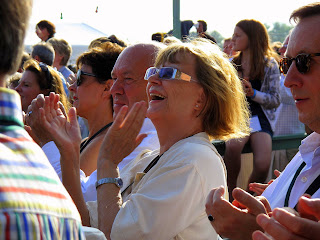 and one final shot of us with Benny from a different perspective. 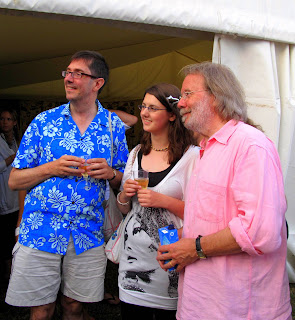 BA said he relished the chance to make music informally away from intense media and crowd pressure. Clearly the performers had as much fun as we did.

Next time I promise talk of loftier things. But this is musical history too, isn't it? And which of us, having heard 'I do, I do, I do', won't go round with it on the brain for hours, maybe days, afterwards?
Posted by David at 10:23

I lovely piece. well done. I very much enjoyed reading it.

How does one just bump into a former member of ABBA, David? I'm speechless with admiration.

And to think that his shirt doesn't indicate rolling squillions in his bank account (although the spectacle frames might).

Jeff, I love the motto on your blog ('an intellectual snob is someone who can listen to the William Tell Overture and not think of The Lone Ranger') - even if nowadays one might have to draw a different analogy. And I'm delighted to see you're a keen cyclist too.

Colin, it, erm, wasn't quite a matter of 'bumping into' Benny. A certain pass was required into a certain tent while the fans attempted to crash the barricades outside.

Still, it was typical of BA's modesty that he chose to do it like this, near the Bandstand on Parliament Hill Fields, when he could, as one critic pointed out, have played the o2.

Peter Stephenson, Elwood Street,
Highbury N5
Dear David
I agree with your comments about ABBA's music being well-crafted and their (Norwegian) lead singer, Anni-Frid Lynstad, had/has terrific charisma. I saw them live at Madison Square Garden in New York and they were brilliant entertainers for three solid hours. But the Carpenters? Wishywashy stuff which is hardly ever played these days, either as recordings, or as covers by other performers. Really, I'm beginning to get a bit worried about you, Mr.Nice. What next..Sydney Devine?
Best
Peter Stephenson
ps when are you going to do another Discovering Music? I really enjoyed the one on Prokofiev.

Well, Peter, you outdo me in the Abba performing stakes.

Carpenters - well, that was then, of course. But Karen has one of the great and most instantly recognisable voices of all time. And some of their song-structures are very irregular and interesting, I'm trying to recall which one in particular I mean and I can't at the moment. Maybe that says it all, but still...

No more DMs planned: I think the producer was pleased, but the excellent Stephen J and Charles Hazlewood are the regulars, and ever more shall be so, I guess. Maybe I'll get the odd bone. Next Radio 3 thing is a pre-prom discussion about Shostakovich before a Prom (19 August, to be broadcast in edited version during the interval). Thanks for your kind words, anyway.

Oh yes I can now, it's just come into my head with a bit of mental prodding - 'Goodbye to love'. A melodie eternelle, as the French would say.

Should I blush to say I'd never heard of Sydney Devine?