Hearts break by the lake 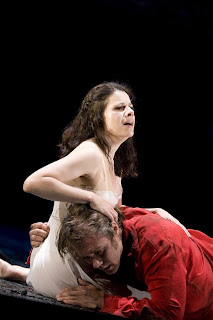 Forgive me for having already exploited heartbreak in the title over a year ago, for Glyndebourne’s Onegin revival with Maija Kovaleska as Tatyana and Jurowski conducting. Well, they’ve done it again down in that Sussex heaven, this time taking more of a risk by giving magic-realist theatre director Melly Still her first break in opera. The subject was a perfect choice, as it turned out, Dvorak’s Rusalka, and with the essential ingredient of a tear-jerking heroine in Ana Maria Martinez, seen above in one of the four Bill Cooper production photographs featured here cradling the prince she’s kissed to death (Brandon Jovanovich).

You may have gathered I’d already fallen even more deeply in love with Rusalka over the week or so trying to get under its skin for the pre-performance talk on Sunday. Thanks to the full orchestral score, which arrived in the nick of time from Dilia in Prague, I was able to marvel even more at Dvorak’s loving detail in every bar. This has to be his masterpiece, as I intimated before. Everything is in it: the tender divided strings, the doubling of vocal lines with bass clarinet and cor anglais, the proto-Janacekian tenderness of Rusalka’s often-heard entrance music, Bartered Bridey dances for comic relief. Alongside the Wagnerian subtlety of the many thematic transformations, Dvorak gives all his singers wonderful set pieces fully embedded in the drama; and even the Polonaise-ballet at the Prince’s court in Act Two weaves in the music of Rusalka, her love and impending doom. There’s plenty more to find, and I’m still finding it.

I’d been listening to two very characterful recordings – Mackerras’s with Renee and Big Ben, Neumann’s with the melting Benackova – and watching two radically different productions on DVD - Pountney’s Edwardian-nursery ENO classic and Robert Carsen’s psychological delve for the Paris Opera. It says so much about the work that it can take their diametrically opposed endings. The Rusalka of Pountney’s Eilene Hannan is left wandering in eternal torment in the cruellest curtain of any opera I’ve seen; Carsen’s Renee Fleming achieves consummation in a hotel bedroom with her Prince (Sergei Larin), who doesn’t even die from her kiss. Dvorak’s shift from C sharp minor to beatified D flat major suggests to me that Rusalka does achieve some kind of transcendence. Still was able to evoke that as Martinez’s lacerated Rusalka looks out hopefully – does she see the Prince’s soul rising? – and the reeds of the despoiled woodland glade glow with pinpoints of light.

Weirdly, the image I’ve come away with is the one of the earthy, sexed-up wood nymphs in their barky skirts and woolly jumpers leaping in the air and joyously clutching their breasts. I’ll never be able to hear Dvorak’s wild dances in Act One without thinking of that. In Act Three, the nymphs become like Bacchae, threatening to rip Alasdair Elliott’s Gamekeeper to pieces in sexual frenzy. So there’s violence here, and lots of animal evisceration, but Still insists – as Carsen did not – on the supernatural. Rusalka is a real mermaid, manipulated by a creepy movement group until she gains mortal legs, and later her sisters appear, suspended, to shun her. 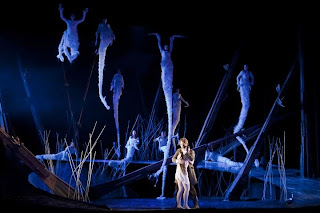 By the same token, the gorgeous-toned Mischa Schelomianski’s Vodnik is a picture-book swamp-creature, though a deeply compassionate one, and luxuriously-cast Diadkova’s Jezibaba, a character she depicted in Carsen’s production as a savage alter ego of the heroine, waddles around as a strip-cartoon Babushka, definitely dispassionate but amused, and amusing (though shadowed by frightening black sisters played by burly blokes). The occasional wit of Jaroslav Kvapil's eloquent libretto certainly came across here.

The ball scene is fluently done, with stylish costumes and shadowy dances; the choral image of the white bride and the red roses is carried through to Rusalka’s short-lived happiness. 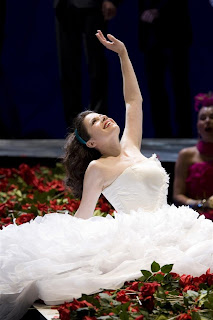 In that strange hiatus where the principal soprano can’t sing for three-quarters of an act, we had more luxury from the elegant Tatyana Pavlovskaya as the Foreign Princess, crowning an act which Jiri Belohlavek and the LPO whipped up into a Gotterdammerungesque frenzy. Belohlavek knows every word of the text off by heart and probes deep into both the luminosity and the surprising violence of Dvorak’s score. Jovanovich’s handsome prince isn’t quite the verging-on-heldentenor his role requires, and he glossed over his final top C; but he died so effectively and movingly. Martinez, too, may not be everyone’s idea of a creamy Rusalka voice, but her technique knows no bounds, she hits every top note with searing intensity and she’s an astonishing actress, using vocal colour, face and body to maximum effect. 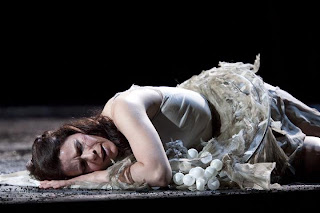 Some say, oh, but you should have seen the Grange Park Rusalka. I don’t care; this was perfect for me, I wept as I told the lecture audience they would and should in the last quarter of an hour, and if L’amour de loin revealed the ideal director for Tristan and Parsifal, Melly Still should be snapped up immediately to direct a Ring cycle. She’d capture both the supernatural and the achingly human in it to perfection.

Glyndebourne, of course, is the place to see Rusalka. You can imagine the poor sad nymph sitting on one of the overhanging willows by the lake, gazing at the water-lilies. OK, OK, I’m Fotherington Thomas, clap your hands if you believe in fairies. But Gbne on a clear Sunday afternoon, after a Saturday of driving rain, does that sort of thing to you. 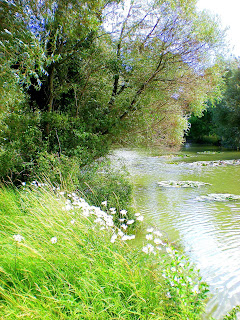 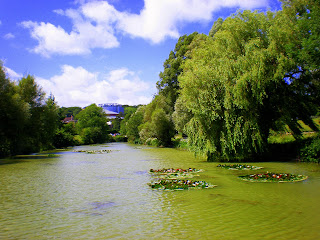 Here's a useful phrase you might want to try out on any of Dvorak's compatriots if you're going to see this production: 'jsi videl Rusalky u jezera?' or, 'seen any Rusalkas down at the lake?' I got my Czech-speaking friend Charles Kerry to translate that so I could make the punters laugh just a bit at the talk.

One more for charm: I’ll admit this visitation, which belongs more to the world of Janacek’s Cunning Little Vixen than it does to Rusalka, wasn’t snapped at Glyndebourne but at Chelsea Physic Garden the week before. In among the blue damsel-flies, this giant helicopter of a dragonfly came as a surprise. 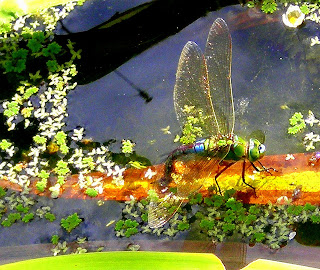 And I haven’t really finished. Our de luxe Glyndebourne weekend began with Falstaff on Saturday, an equally dazzling experience with another great conductor, unforgettable central performance and endlessly resourceful direction. But I must get some Real Work done, so I’ll come back to that tomorrow.
Posted by David at 14:49

from Victoria Rothschild
I appreciate what you write about your wishing your bloggers would make remarks relevant to your piece. But the thing is that as a professional music critic, you are operating at a high level, knowing singers and musicians personally, being at actual performances, recording studios when CDs are being made. For the rest of us mortals, all we can do is come in somewhere at the bottom of this, and so our comments are going to seem tangential and mechanical simply because we don't/can't have the same levels of information. Please try to understand this incapacity.
Victoria Rothschild
Elm Tree Road, StJohns Wood, NW8

Well, I suppose my big-dog-going-up-and-licking-everyone's-face mentality stops me thinking that way. Anyhow, Y'ALL are the intelligent viewers/listeners for whom these shows were intended, so your opinions are valid, however expressed.

What I really like is when someone comes at a work from a specialised viewpoint, knowing more about set machinery, Victorian morals, myths and legends, for instance. I found when I was a tour guide at the Freud Museum that our knowledge was vastly increased by Viennese visitors who knew about the furniture, Argentinians obsessed by the Gradiva etc.

Anyway, I think to be intimidated is a pity. There are so many people who say, I liked that symphony/opera but I don't understand much about music, and yet they're coming at it with heart and soul, which is more than I can say for many critics.

So don't be frightened!

From Victoria Rothschild
With respect, I am neither frightened nor intimidated by the admittedly knowledgeable critics that I read, hear etc., but the thing is that often they quite understandably begin to assume that their readers/listeners are as well informed as they are. The only point I was making before was that for obvious reasons that is unlikely to be the case, simply because we the "general public" cannot spend as much of our time cultivating this knowledge as critics do. This is not aimed at you personally by the way; I was only trying to inform the debate. All professionals tend to end up thinking like this, so it is not a fault merely of music critics.
What do you think, by the way, of the Rene Jacobs' recordings of Mozart operas on Harmonia Mundi? I have enjoyed them very much.
Victoria Rothschild
StJohn's Wood, NW8

Sorry; let's start that one again.

Fair enough; I just view things slightly differently. I like Sir Charles Mackerras's description at one of our meetings - 'people like you who are publicists for music'. That's first and foremost what I'd want.

On which note, I compared Jacobs' Mozart Clemenza with Mackerras's on CD Review some time back. I didn't find all the singing that great, and while I like the playfulness of RJ as continuo player, I found some of it over-urged. He's a rather alarming conductor to watch, by the way - I don't know how anyone follows him.

Haven't heard the Idomeneo yet.

Is that real, the dragonfly pic? That's the stuff prixes are made of.

Absolutely real, Calum. I was surprised how well the dragonfly stills came out - apparently it's rare to get them settling. I only recently noticed the reflection of a damsel-fly in the water.

I've never been to Glyndebourne, and I've never seen Rusalka, so I am shatteringly unqualified to comment on this post. I like that aria about the moon and stuff though.

What I'm here for is the Jacobs conversation. The Cosi was extraordinary and mindblowing and one of the increasingly few moments where a new recording made me think 'Of course, THAT'S what it's meant to sound like.'

The subsequent Mozart recordings have demonstrated something not unlike the law of diminishing returns.

You've made me take that Jacobs Cosi off the shelves, Jon. It's much better sung than I remember, the pace is phenomenal and I love all the ornamentations. The meaning comes across so clearly, too, as I casually listen without score or text.

Did you 'do' the second of the Trafalgar Square spectaculars? I was there, and loved it - more anon, with pix.

Listening on - this is the virtue of 'liveblogging' - the VERY slow tempo of 'Di scrivermi' doesn't work for me, Gens is slightly flat both there and in the trio. Makes me want to go back to the Mackerras: it strikes me he always has an instinct for the 'right' tempo (which means I agree with him), and helps the singers more.