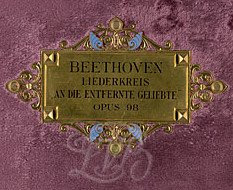 Whenever I wonder what's the point of bloggery, when questions are met with cybersilence or else commenters start off on a tack which has nothing to do with the main subject, I remind myself of the wise maxim: do it for yourself, for your own self-expression (not that I hold with the current notion that self-expression is necessarily good per se).

I learnt recently, though, that there had been a rather dramatic consequence. The image of a lady posted here prompted her Great Love, as she calls him, to get back in touch after years of separation. He is now moving closer, to cultivate his garden 'and perhaps me', she adds. The photograph originally accompanied thoughts on an opera about two people who...but I must stop before I give anything else away.

Now I must rush back to work and steep myself in more of Dvorak's great masterpiece Rusalka, a story about a huge gulf between lovers which makes me very, very happy indeed. I'm delighted to have found this picture of Ruzena Maturova in the 1901 Prague premiere. If her Prince gets in touch as a result, he's too late - but out there in the ether, who knows? 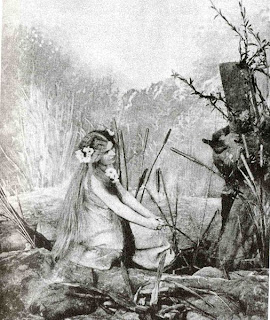 The bittersweet fairytale is to be continued...

*Some of you didn't 'get' the slightly oblique Beethoven illustration: the bound m/s is for the song-cycle 'To the distant beloved'. I find myself more fascinated by Schumann's quotation of the last song in his quirky Second Symphony than by An die ferne (or entfernte, as the above would have it) Geliebte itself, and had a chance to sound off about it for the LSO, but that's my Beethoven problem for you.
Posted by David at 11:29

noting your commentators' praising the merits of StJohn's College Choir as well of course as King's, may I point out to your readers that there are other very impressive choirs in the university also? Clare, Trinity and Gonville&Caius Colleges all have fine ensembles, although admittedly not choral foundations. My own college, Gonville, has performed on Radio 3 several times and even done the great Choral Evensong when StJohns and Kings were unavailable
Theresa Howard, Medicine, Gonville&Caius College, Cambridge.

from Theresa Howard
ps sorry for going off on a tack which has nothing to do with the main subject, but I do think your readers might be interested. I often find tangential comments on blogs the most intesting and revealing
Theresa Howard, Gonville&Caius College Cambridge

No need to apologise, Theresa. Personally I like threads which evolve from one thing into another, but I stress 'evolve'.

But I'm happy for all thoughts to appear here, especially as I've been satisfied by a batch of to-the-point comments.

from Jenny Rowley
I refer to your previous commentator, David Damant(perhaps a personal friend of yours from his tone) noting that many regard the present Queen of England as a pretender to her throne, implying that the Duke of Bavaria - the last Stuart - is the rightful monarch, or at least his heirs and successors. In Edinburgh each year, at the Tridentine(traditional Catholic) Church of StMargaret&StLeonard, on the Pleasance, there is a solemn requiem mass to the memory of Duke Albrecht, the "rightful monarch". My mother still lives in Edin and attends this church. Clearly some people there owe their allegiance to this last Stuart, rather than the "House of Windsor", which they regard as a pretence and a farcical sham
Best wishes
(Dr)Jenny Rowley, Sunbury-on-Thames

Indeed - now this IS a curious one. Alexander McCall Smith makes comic capital out of it with the escapades of the unlucky Big Lou's boyfriend in his latest 44 Scotland Street novel, The Unbearable Lightness of Scones.

Unpromising title, isn't it; and I often start these books thinking, well, if this isn't too trivial (and I do get irritated by AMcS's anti-European digs). But always there are some deep and beautiful thoughts embedded in the ordinary, usually in the personage of Angus Lordie.

Yes, Mr Damant and I are friendly opponents: I don't agree with much of what he says, but he says it well, and that's always entertaining.

Thankyou for your reply - I haven't read McCall Smith, but what do YOU think of the House of Windsor, the Duke of Bavaria's claims to the throne and the Stuart question? Surely that is what David Damart was trying to winkle out of you a few blogs ago.
Greetings from sunny if staid Sunbury-on-Thames
Dr Jenny Rowley

I must apologise - if I used the word "pretender" about Elizabeth's right to the thrones of England and Scotland as the lawful heir of the Stuarts it was careless of me. But one cannot overlook the fact that the rightness of that claim was argued by the late Iain Moncrieffe of that Ilk, who was not so much an authority on such things as THE authority. He argued that after the death of the Cardinal of York the next so called Stuart heir - the Royal Sardine - could not inherit as he was not born within the jurisdiction of a legitimate former monarch. But George III was born in England and became the legitimate Stuart king....the romantics ( and maybe the Catholics) cannot take this.

George III ( no one should polute the mind by watching that fictional film) provided the Cardinal with a pension, when it was reported that the latter was in financial straights in Rome.

Jenny, I have no strong feelings on the subject but am happy to be entertained by those who know better.

Does not "entfernte" have an implication of "removed to a distance" ( if only be fate)whereas "ferne" simply means "distant"?