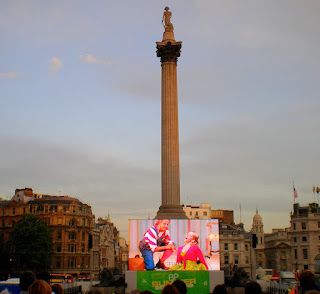 Horatio met his Trafalgar, so to speak, eleven years before the premiere of Rossini's Barber of Seville at Rome's Teatro Argentina (still a beautiful theatre, incidentally, though the production of Mozart's Cosi fan tutte we saw there was atrocious). I'm sure the old seadog would have enjoyed the Royal Opera's live, five-star screening beneath his column (did he go to the opera in Naples, I wonder? He turns up in Sardou's - though not Puccini's - Tosca). A preliminary word about the amateur shots: I'd never do it in the theatre, not even for the curtain-calls (a recent bane of blogging IMHO), but the relaxed spirit of the occasion and the nature of the piece encouraged me in this instance.

A vast crowd of floaters, dogged Prommers like myself and the comfortably seated cognoscenti loved it, and were honoured with not only great vision but also excellent sound. Not having sampled one of these events al fresco before - jondrytay has a vivid report of Renee's Trafalgar Traviata on his blog - I was tickled pink by the sheer accessible, perish the word, exuberance of it all. Proud, too, that even those passers-by who didn't, to be honest, seem to cast even a glance at the screen, could if they wanted see attractive stars at the top of the vocal game in such a colourful (Caurier/Leiser aka 'Mosh and Posh') production.

The huge publicity surrounding Joyce DiDonato's foot mishap onstage and her subsequent determination to play Rosina in a wheelchair can only have helped. 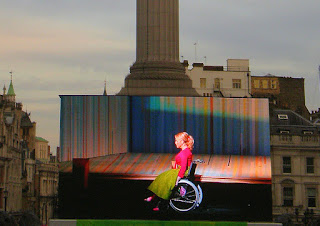 It only goes to show not only that a Yankeediva can be practical, but also that someone with La DiD's dramatic flair can make a real interpretation out of a spirited young girl even more restricted in her movements than Dr Bartolo intended. As she says on her blog, three weeks of intensive rehearsal went out the window and everyone moved hell and high water to do the business around her. Clearly it was she who should have wrecked the room during the storm rather than directing Berta (the splendid Jennifer Rhys Davies, a dead ringer for Montserrat Caballe with a schnozzle) to do it for her. But she carried it all off with energy and style, and her wheelchair acting was far more convincing than Anthony Sher's thousand and one things to do with a pair of crutches as Richard III.

And the singing, my word, the singing: such artistry and playfulness from DiDiva to match Juan Diego Florez's Almaviva. 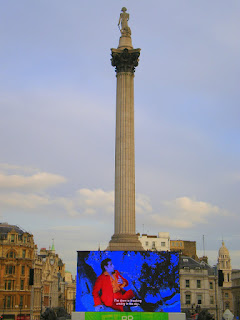 Actually, I can only take what sounds to me like a rather reedy tone in small doses, certainly not a whole recital's worth, but boy, can Florez deliver the coloratura goods and the top notes in the big final aria, 'Cessa di piu resistere' (the one that's usually cut and which Rossini recycled for Cenerentola). The crowds both in the Opera House and out in the London night went wild.

Since Caurier and Leiser are no Jones or Kupfer, they didn't get evenly accomplished acting across the board; the less thoughtful the actor, as with Pietro Spagnoli's good-enough Figaro, the more pantomimic the results. But there was a de luxe 'Calunnia' from the great Furlanetto, and Corbelli as Bartolo would have to top the bill in teaching everyone how to do classic buffo acting without going over the top. The lady on the controversial empty plinth wasn't going to look at Basilio or pay much attention to Bartolo's hectoring. 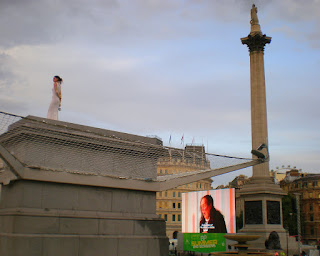 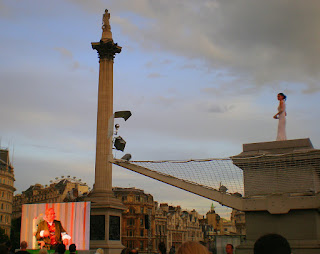 I reckon she could have livened up her act with a pair of opera-glasses, but all she had with her was a camera.

Pappano is as adjusted to the spring of the Rossini style as he is to everything else he touches (Wagner maybe still excepted, though I didn't catch his last Ring, so I can't say how he may have progressed there). Here he is in front of the Royal Opera curtains introducing the show, personable as ever albeit at a distance. By the way, the often torrential rain stopped just before the opera began and held off for the rest of the evening, leaving in its wake some dramatically lovely skies. 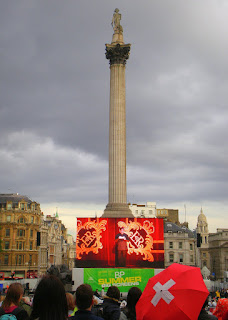 As in the wonderful Figaro a couple of years ago, Pappano opted to sparkle on the continuo, too, though I couldn't hear the harpsichord from our coign of vantage below the portico of the National Gallery (we dashed off for a plate of pasta at the interval, which meant we missed only the music lesson scene, shockingly casual I know, but I don't think Rossini would have minded, and got seats for the rest of Act Two).

Now WHAT, by the way, is NG supremo Nicholas Penny thinking of when he goes so far as to say he wants the pedestrian walkway in front of HIS Gallery turned back into a road? I'm disappointed, though I can see where his argument about rabble-rousing and ear-splittingly loud amplified events began. Yet for every ten bad buskers, there's an event like this which has to make it all worthwhile. I have nothing against the temporary occupation of the plinth, either. My companion of the evening and I both had the same idea: if we'd booked a slot, we could have read Books I and II of Paradise Lost out loud, for our own pleasure if the crowd couldn't hear us.
Posted by David at 12:12

I thought Mr. Penny was sending out mixed messages. He talked about Trafalgar Square needing to be a true public space, and objected to its being cordoned off, and yet to be a public space surely you need that pedestrian zone in front of the gallery? To turn it back into a busy road would be madness.

A propos the opera house in Naples, the late Ian Hunter recommended me to attend the Italian repertory there, since one would then hear productions unconstrained by the inhibitions one finds at - I thought he was going to say Covent Garden or the Met - La Scala !!!

To be fair, I went over what he said and he declared he didn't mind the buskers - it was the ear-shattering level of amplified organised events interfering with quiet enjoyment of the Gallery.

I also hate it when Hyde Park is commandeered for mass events and cyclists can't use their rights of way.

But I still don't see why all that would stop even if you replaced the 'piazza' with the road again.

That above comment, David, was in reply to Anne before I discovered yours.

I've stood outside the Teatro San Carlo wondering whether to buy tickets for an unpromising-looking Otello and then deciding against it. Of course so many great early 19th century premieres took place there, but I wonder if the style has been preserved. Italians do pride themselves on, say, Parmese audiences being the best and most attentive; they're not.

Of course the San Carlo season, like so many others in Italy, has suffered since the financial debacle.

Wheelchairs make a regular appearance on and off stage in Trafalgar Square at the Liberty Festival every September, which even Bojo has had the sense not to cancel. The excellent disabled-access-all-areas made me realise how tough it is for less mobile people everywhere else.

Are there really so many "ear-splitting" events compared with the peace and quiet of the Square at other times, near-constant traffic noise notwithstanding? If so maybe there are better alternative venues to consider, but Liberty is only 1 day out of 365.

is an annual festival for disability arts groups to perform in Trafalgar Square. I've done the last 3 years with the Creative Routes charity and the standard has been amazing, especially the signers who translate every single word.

In contrast the Chinese New Year celebrations were horribly overcrowded and, while Trafalgar Square is at least close to Chinatown, didn't seem very relevant to the nature of the event. We shuffled through the crowds with the children for ages vainly seeking food. Not fun.

So am I to understand that you do not like Maestro Pappano's EMI _Tristan_, nor did you like his Proms _Walkure_? I personally liked both, though Segnor Domingo does not get quite as soft and tender in the _Tristan_ love duet as Herr Windgassen seemed to do, though Mme Stemme's Isolde is doubtless more interesting, at least to me, than Mme Nillson's was, though I indeed admired that great Wagnerian as Brunnhilde.

p.s. I hope I am not again going oover ground that I may have covered here previously.
And I do not recall you having had anything to say about this Maestro's relatively-recent _Butterfly_, though I must check at least a little before I leave. I like it, though Mme Gheorghiu's sophisticated Butterfly may well be beyond what a young Japanese girl should give us, though she must convey her pain at the end.

In brief, JV - I'll deal with the rest tomorrow, only just got back from long day in deepest Kent - I haven't sat down and listened to the Pappano Tristan, and as I intimated, only heard his first Ring cycle which lacked the grand sweep.

But, as I also suggested, I love him in everything else. I've just heard the Butterfly, and it's ravishing - Gheorghiu's performance has deepened, and in the studio at least she's pretty perfect. Kaufman - well, I'd want a more Italianate sound for Pinkerton. Pavarotti is too much in my head.

So, in your opinion at least, I must have missed the mark by regarding Herr Kaufmann's Pinkerton as Italianate? Though the voice, of course, is different, his mode of expression sounds to me like something Herr Wunderlich would produce, both lyrical and passionate as required. I find Herr Kaufmann's high C at the end of Act I of this _Butterfly_ _ABSOLUTELY_ thrilling, and, on another tack, he is tender with his "vieni"'s, whereas I seem to recall Segnor Domingo singing them as if he wanted to rape Butterfly. To my ears at least, the music would seem to warrant the former, though, of course, I am unabble to check a score for myself.