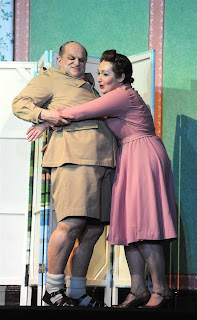 HE: I love you! And at last I've found you.
SHE: If only I could get my arms around you.
Amanda Holden's English translation of Boito's brilliant Shakespearean libretto makes Verdi's Falstaff fun enough at the ENO. But even those Pountney and Warchus productions pale alongside what the directorial genius of the day Richard Jones has to say about Windsor all'Italiana at Glyndebourne (or had, because Saturday night was the end of the run. But fear not, you'll be able to catch it on tour in the autumn, and this tip-top cast has been filmed for DVD release). Above, Dina Kuznetsova's Alice Ford attempts to put a girdle around Christopher Purves's fat- and Safari-suited Sir John (all production photos for Glyndebourne by Alastair Muir).

Those on a certain site who shrieked 'provincial' at me for preferring Purves's Wozzeck to Matthias Goerne's should be eating humble pie, but probably they'll start up again if I say that Purves's was the most beautifully sung and phrased Falstaff I've ever heard - and there was me thinking he was just a fine singing actor. Of course the physical comedy is wonderful: the slight lascivious swaying, the prodding with a passing sausage on the 'no's of the honour monologue, the nimble dancing not uncommon in a fatty, the crumpled pathos of feeling old after his drenching in the Thames. Purves somehow sidesteps all the usual broadly comic business, and makes us believe in Falstaff as a cultured gent waxing old and lardy, a man of letters with a large sensual appetite and maybe a great wooer in between being page to the Duke of Norfolk and the beached whale he now is.

Jones, too, finding a gesture for every musical idea, always avoids the obvious: following Sir John's beautified entrance down the stairs after Ford's big jealousy number (powerfully sung by a comically bug-eyed Tassis Christoyannis), the 'after yous' are done side by side, and no joint exit ensues as the curtain falls on their indecision. 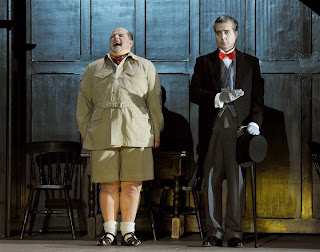 You've probably heard by now that this is a 1940s Falstaff, a Windsor full of skipping and stitching brownies, a town digging for Britain with the multiple cauliflowers of the Fords' garden, offering a street with fashion and bridal wear for Nannetta to admire and a joke shop to equip the 'mascherata', which is full of references to Hollywood horror and fantasy films of the 1930s. 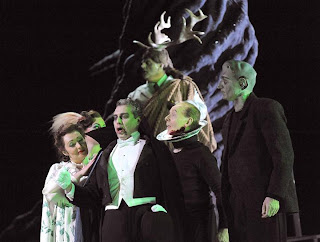 Not sure that totally works, but elsewhere no foot goes awry.

The razor-sharp detail of Jurowski's LPO in the pit is quite exhausting to take in; Verdi puts in never a dull bar, but even by his standards, and Toscanini's execution of them, the precise articulation stuns. Among a myriad highlighted sounds are the clarinet note that completes the descent of the cor anglais in the letter-reading, the rigorous trills of the flutes as the sack begins to operate in the deflated Falstaff's innards, the half-bar martial blasts of the brass. Jurowski started rather carefully, for maximum clarity, and trod cautiously at the start of the havoc in the Fords' sitting-room - I've been listening to Abbado, who captures a unique lightness throughout - but how the orchestra must have respected all that hard work. Both players and singers were having fun on the last night, but they must have had to keep their wits about them.

And the rest of the cast? Usually a Falstaff of Purves's or Terfel's calibre overshadows the others, but not entirely here. Let's line them all up in one of my favourite operatic scenes (even though the protagonist is absent), I.2. First, the ladies: 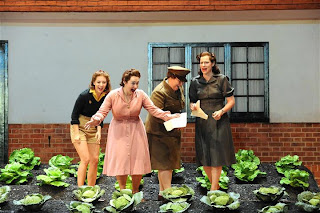 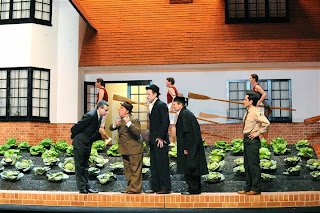 Lemieux was Purves's equal for laughs and Shakespeare-worthy entertainment value, a palpitating womanly heart within a Hattie Jacquesian uniformed carapace who won a predictable round of applause on exiting in 2.1. I'd have liked a bit more Italianate opening up from Kuznetsova's Alice, but the Nannetta of Kucerova promised great things for her Queen of the Fairies aria - not quite delivered, maybe she was a little tense on Saturday - and Bezduz as a cute, pocket-sized GI did the reverse, opening up more for his moonstruck cavatina than the rather unsensuous early scenes might have suggested.

Quite exhausted at the end of it, my head was still full of the Rusalka preparation (see below). Conversely on Sunday night, I came home singing Falstaff. Both were wonderful evenings, Glyndebourne at its high-flying best. All I could wish for now is to see the great Jones's new Munich production of Wagner's Lohengrin. It's been met with blank incomprehension in many quarters, but this thoughtful review on musicalcriticism.com gives a good idea of what the concept's all about.

Anyway, back to East Sussex. Our fat knight might have raised an eyebrow at the singular fare we consumed between shows. Old chorus hand Charles Kerry, seen with his head on a plate above, served up an unforgettable Sussex food-for-free breakfast at his home in Lewes including samphire tortilla and mirabelle plums from the Downs (the things that look liked baked beans on the right): 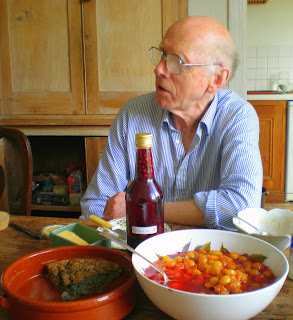 He told us he gathers his porridge-fed snails from a special area near Lewes Prison, which the gastropods 'must view as some kind of Bermuda triangle'. Which allows me to segue to something even more of an acquired taste, snail's eggs at the French Ambassador's Bastille Day celebrations last night: 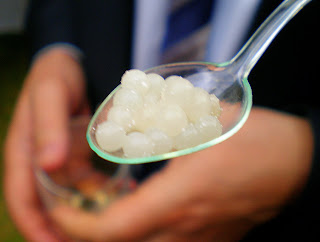 The French know how to throw a flamboyant party, the climactic ceremonials crowned with a bread-rolled Tour d'Eiffel and Arc de Triomphe, photographed as we rhubarbed along to the Marseillaise: 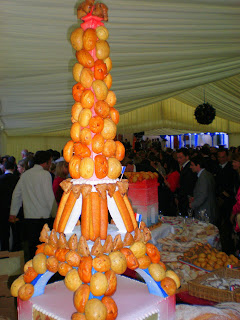 Well, we were both heartily sick afterwards, though in my case it was probably the mix of champagne and Ricard.
Posted by David at 15:38

From your opening quote, I gather you know the Falstaff recording sung in English with Andrew Shore? I like it: it certainly puts the Shakespeare back in context.

I do, John, yes: the humour comes across very vividly, great to have Sue Gritton and Barry Banks as the young lovers, and Paul Daniel is on good form (as he can be when he knows the score). I made a highlights disc of it for an 8 year old who'd enjoyed The Merry Wives of Windsor with us at the Globe.

And now I find I can take him to a performance on the Glyndebourne tour.

I also like that English _Falstaff_, and you already know a big reason why! That is some special singing in the fairy song. I must admit, perhaps to my shame, that this was/is my first exposure to this opera as a whole, though I came to _Otello_, via Toscanini, a few years prior to that. Yet I still have a way to go with the core Italian and French repertoire, but am getting there.

Although Wagner _MIGHT_ have liked it, I am sort of glad that I am unable to see it, and most other revisionist productions, though room must be made for such if a composer and his/her librettist are willing to have their work(s) possibly subjected to such treatment, as I again gather Wagner was in principle at least. The reviews of this new _Lohengrin_ which I have read also suggest that Herr Kaufmann, another favourite, was not on tiptop form, at least on opening night.