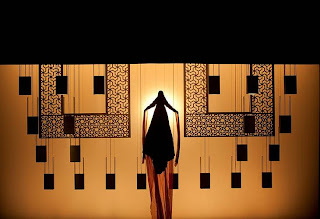 That’s how I’d kept Kaija Saariaho’s music since disappointments with her Graal Theatre, Flute Concerto and those songs in which Karita Mattila so passionately believes. Reports from both audience and orchestral musicians of her opera Adriana Mater at the Barbican hadn’t been encouraging, either. But reading vibrant young conductor Ed Gardner’s passionate advocacy of L’Amour de loin, Saariaho’s millennial reflection on the ‘love from afar’ of medieval troubadour Jaufre Rudel, Prince of Blaye, for Countess Clemence of Tripoli which eventually becomes a reality, made me think I ought to try one last time. So off I went last night to the Coliseum and this singular vision as captured in all production pictures here by Johan Persson for English National Opera.

I’m heartily glad I did. Even when Saariaho’s finely layered, shot-silk score seems more obsessed with ‘process’ than any thematic hooks which might keep the listener alert – and by Act Three, towards the end of the first half, I did begin to fall into a soporific haze – the production by Daniele Finzi Pasca, whose Cirque du Soleil work I haven’t seen, remains ravishingly beautiful. In fact my companion Edward thought it might be the most integrated staging he’d ever seen. We are in agreement with Andrew Clark of the FT, who ascribes the rarity of such exquisite shows here to a mixture of conservatism and lack of funds.

Promise of acrobatics made me dread that a simple piece would be smothered in physical theatre, but the movement folk playing the soul-doubles of Jaufre and Clemence glided and somersaulted like noiseless spirits. The lighting (also Finzi Pasca’s work) is magical, the evocation of eastern Tripoli by lattice-work screens simple but effective, the seascapes of Jaufre’s journey from France to Libya constantly haunting.

Saariaho was sitting, resplendent in red, several rows in front of me, and I wanted to ask her if she thought this was an ideal representation of her chef d’oeuvre. Musically, too, it could hardly have been better. As Jaufre, Roddy Williams came close to his achievement last year in Vaughan Williams's Pilgrim's Progress: such a musicianly phraser, such a sympathetic presence, so good with words (though Amin Maalouf’s often eloquent text would surely work better in French). 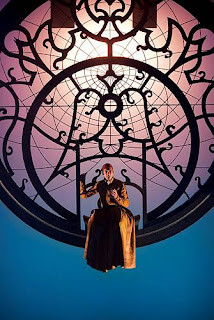 And if at first Joan Rodgers’s Clemence sounded cloudier than the crystal-clear Pilgrim of outstanding young American mezzo Faith Sherman, she produced some beautiful melismas and seemed in better vocal form than I've heard her recently.

The scene where the dying Jaufre arrives at Clemence’s citadel and kindles her passion was the mesmerising highlight of the evening for me. The very monotony of the vocal lines – which do at least have the virtue of tying in with what the orchestra’s doing, rather than competing as in so many new operas – creates a sense of time standing still abetted by the once again hauntingly beautiful stage picture. 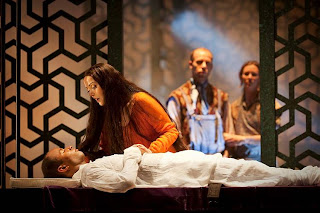 Here, too, Finzi Pasca’s use of three Jaufres and three Clemences liberated the singers from a straightforward deathbed duet. Surely he could he do a compelling Tristan or Parsifal this way?

Gardner vindicated the beauty of the score, as he’d promised he would. I’m still not quite convinced by Saariaho’s hazy wash of percussion – many great composers use this department in a far more imaginative way – but she does write distinctively for wind and harp. Nor is this just ‘immersion-tank’ (Seckerson) or ‘bubble-bath’ (Christiansen) music: it has its stormy disruptions, and the subtle use of oriental dance provides some contrast. Saariaho's tempest isn’t equal to that of Sibelius, whom Saariaho was so obliging to discuss with me by e-correspondence for the Barbican's 'Sibelius Unbound' festival programme (scroll down to 'Sibelius Celebrated' on page 4), or even Ades's, the recording of which I recently reviewed for the August/Proms issue of the BBC Music Magazine with very equivocal feelings about the vocal writing (the performers there in no wise follow all the impossible details in the score, which I was following for the first time). 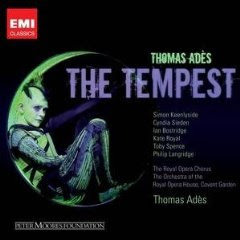 As with Birtwistle’s Minotaur, no single idea from L'Amour de loin will lodge in the memory; but, as on that occasion, the total work of art achieved by these dedicated artists and production team will work its magic if you have the patience. It’s worth going – and staying after the first half, as some did not – especially as you can now get good seats for a tenner or even (on lastminute.com, a student informed me) a fiver.

Now: an alternative apotheosis for Clemence, forced to say ‘goodbye to love’ with the death of her beloved troubadour. 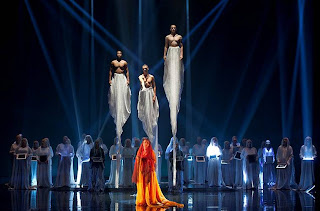 This is partly an attempt to change the mind of Peter Stephenson, who in the comments to the last blog entry accused the Carpenters of ‘wishy-washyness’. I replied that they’d left us at least one great song, and here it is - the first YouTube 'embed' I've done. I reckon they usually mar the aesthetic look of a blog, and this one, with its karaoke singalong, is no exception, but never mind. It confirms for me that Karen C did indeed possess one of the most distinctive voices of the last century.

Subsequently jondrytay in his comment below reminded me of 'Rainy Days and Mondays', a cheerful song about depression (to paraphrase Gwyneth Lewis's Sunbathing in the rain). Rather than clog up the blog with YouTube screens, here's the link.
Posted by David at 09:38

There is no sadder first line to any song than the first line of 'Rainy Days and Mondays'.

Forgotten that one. 'Goodbye to Love' is pretty bleak, too, isn't it?

And we must add Miss Peggy's 'Is that all there is?' to the list, too, though for some reason that makes me smile.

Only you could pair off Saariaho and the Carpenters. Those are glorious songs, though - I bet the troubador's aren't so good.

No - and he was singing about love, not despair. I believe KS squeezes in a bit of an original Rudel melody.

Dear David
I find it interesting that the two Abba men became very skilful at protecting and enhancing Abba's financial winnings, which were obviously considerable, while the two women, Anni-Frid and Agnetha, both had severe neuroses, breakdowns and now lead highly reclusive lives. What went wrong with them? And why did it not happen to the men?
sincerely
Charles Huggins,
Disraeli Road, Putney
ps I know that Anni-Frid suffered the devastating tragedy of her daughter's being killed in a car accident in the USA, but even allowing for this terrible trauma, it does seem that for some reason the two ABBA men always remained very level-headed and sane despite such success.
I always enjoy reading your blogs and listening to Building a Library
Why do you not write for the Gramophone? I cannot afford to buy that and the BBC music Mag
Charles Huggins.

Can't answer your main question, Charles: I don't know much about the private lives of these stars as they're usually subject to the kind of tattling, sensationalist 'documentaries' that get shown on the more obscure TV channels (and, these days, the less obscure ones).

But I can tell you that I used to write for the Gramophone until there came a perceived conflict of interests with BBCMM. I didn't have to choose the latter, which I would have done anyway; I was unceremoniously dropped from Gram without any parting communication, nor have I ever had one.

I miss all the interviews I used to do, but I do think BBCMM is the better all-round mag these days, so I advise you to switch subscriptions. Well, I would say that, wouldn't I?