Two wheels through the Weald 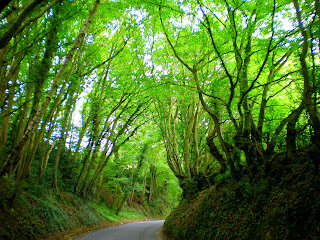 Yesterday I put my bike on a train at Charing Cross, alighted at Robertsbridge in East Sussex and cycled to just beyond the Kent border near Bodiam to see an amazing collection of Russian scores and manuscripts. I won't write about that in case hordes should invade the Weald privacy of the collector's delightful widow, who served me an excellent lunch and put me to work planting a couple of rosebushes, but it's time to touch on a few incidental churches.

St Mary's Salehurst - 'long and large...built of Hastings sandstone between 1250 and 1360'(W.S. Mitchell in the Shell Guide to East Sussex) - boasts a grand nave, one of the biggest in Sussex. 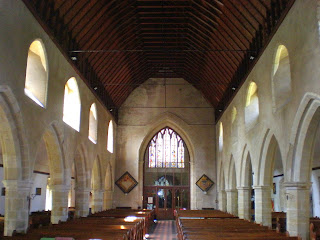 As I was taking a guilty diversion on my journey, I didn't stay for long enough to discover the 14th century birds in one of the windows, but I did like the 15th century glass in St Nicholas Sandhurst. 'Poor quality', opines John Newman in the Pevsner guide, 'as C15 glass often is' - but the naive execution has bags of charm. Here's St George 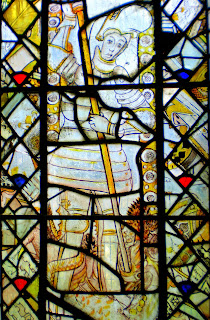 and a jolly little pig at the foot of a saint with a sword* I couldn't identify: 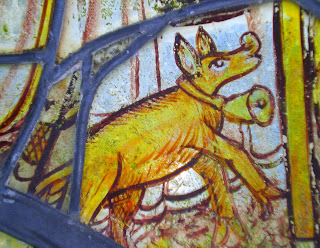 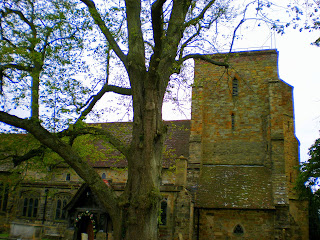 Unfortunately there's local controversy afoot about the lights installed by a certain big cheese. We know how resistant the regions are to any sort of change (viz the absurd fuss over Maggi Hambling's Britten memorial scallop on Aldeburgh beach, which I adore) but these are hideous, don't you think, and too claustrophobic as they hang from low arches. 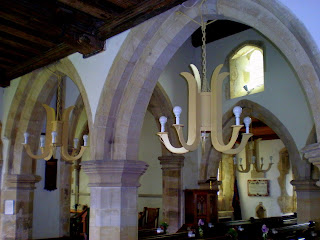 The whole day had a dreamlike quality, and I must confess the many Weald hills had me dropping from exhaustion - I had to get off and push the bike up several - but at least there was a bonus of beech-shaded lanes (pictured at the top).

I promised not to talk much about the Russian scores, but let me just say how amazed I was to see a facsimile of Musorgsky's original Pictures at an Exhibition. The handwriting is so incredibly neat and pleasing to the eye. I wouldn't have expected it from the bleary alcoholic of the famous Repin picture - though that, of course, was painted just before Musorgsky's death. The original m/s is lodged in Moscow. 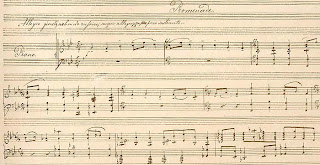 This reproduction cuts off the right side of the page, and doesn't show the most amazing parts of the writing (notably a cross-hatched removal of one bar in the 'Great Gate'), but it gives some idea.

*Or it might be a monk with a staff, if I re-read my Pevsner correctly.
Posted by David at 12:09

You have my vote on the lighting horror. Doesn't that sort of thing have to be approved by church councils?

I'd have thought so. In this case, Canterbury can put its oar in, surely.

Are you sure that the score was not written out by a clerk employed by the composer just because his scores were so neat? Does the crossed-out bar show a different hand or a different pen ( and a different emotion)? In any case no composer with the genius flowing out of him could possibly be so neat first time. So in one sense or another it must be a copy.

Well, I'm not saying it's a first draft, but I'm pretty sure that's Musorgsky's writing. The Russians wouldn't have gone to the trouble of producing such a lavishly-bound facsimile if it wasn't.

Musorgsky made his living as a scribe in the forestry department for several years. Hundreds or thousands of pages of his handwriting probably exist in the files somewhere. So it's not implausible that his handwriting should be especially nice.