Xmas in the city 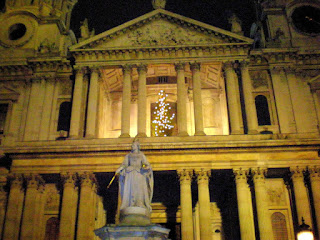 Our first, in fact, for about twenty years (though there must have been one when we cooked a dry duck and one of our guests gobsmacked another with the unanswerable comment 'I hate modern art!') So while we've often shirked all trimmings in, say, deepest Palmyra or a snowy Isfahan, we thought we might as well embrace the traditional.

Which meant the full lessons and carols at St Paul's on the Eve. 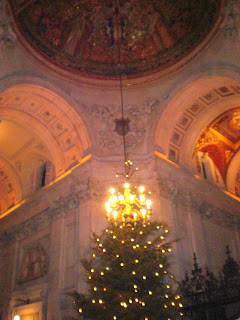 Our good friend Father Andrew got us plum seats under the dome, which was as well since the queue was still stretching round the outside of the cathedral when all places had been filled. Even from our prime position, we still couldn't really hear the choir until they came out from the stalls to blaze Tavener's 'God is with us'. Why not have the real Orthodox thing, I was thinking, when the organ suddenly jammed in a fortissimo minor chord a semitone above the choir, a promised coup suggesting a glimpse of the Almighty.

Otherwise, I was wondering if the choir numbers weren't a bit, horrid word, monocultural, but this is high Anglicanism, so why not? I just remembered how international our inspirational maverick choirmaster 'Uncle DAH', David Harding, used to make our All Saints carol services. We all loved best his arrangements of the Czech shepherds' carol 'Pujdem spolu do Betlema' and the Argentinian 'peregrinacion' 'A la huella, a la huella'. I was looking for these on YouTube and all the cheesy versions weren't a patch on his.

Anyway, the Bishop of London resonated at the end of the service and here's a shot of one of his right hand men, Rev. Hammond. Not a bad getup for a mere succentor*, is it? 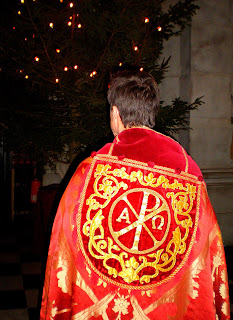 A suitable anthem for the day? Cornelius's noble 'Three Kings', second only to Howells's 'A spotless rose' (which with typical church-choir whimsy we used to know as 'a spotty nose') in my affections. Just heard Fischer-Dieskau delivering a much brisker rendering, and of course he can manage the bass-baritone solo like no-one else, but this 2006 performance from King's is the best I could find:

Let's move sideways to the greatest of all the late 19th century German song composers: Brahms, and his ineffable Geistliches Wiegenlied. Dame Janet muses while Cecil Aronowitz takes the viola obbligato (apparently a traditional German carol). I'd slightly prefer Anne Sofie but this is also lovely, and bless the poster for the hard work on visuals:

Alas, the usual murk is upon us, so I'll go back to the crispness of Sunday and an excursion to Cally's birthday party up in Kensal Rise. There the snow and ice were thick. Hostess Kitty had just had her Della Robbia imitation restored and put up outside the kitchen 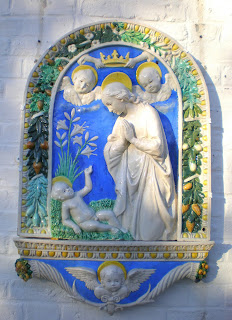 while on the adjoining wall the neighbour's children had been producing temporary pagan counterparts. 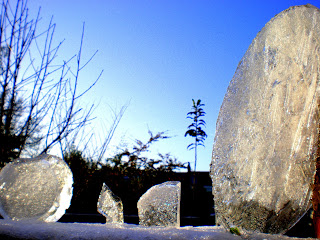 Enjoy, whichever way you care to celebrate it. Here's a final image, of Friday prayers during the African muslim festival of tabaski, Djenne, almost two years ago to the day.


*precentor's assistant, responsible for music management.
Posted by David at 10:35

Do the colours of Ruben's Adoration of the Magi fit well with the colours in the stained glass of the East window below which the picture is placed? Perhaps it should be positioned elsewhere?

The splendid picture of the facade of St Paul's shows in the foreground the statue of Queen Anne. When the Golden ( or possibly the Diamond) Jubilee of Queen Victoria was being planned to take place at the Cathedral, it was suggested to the Queen that this statue was rather in the way, and could be moved for the duration of the Jubilee.
"Move Queen Anne?" replied Victoria - "certainly not. Why, one day somebody might want to move ME !!"

Queen Anne had 17 children, none of whom survived. Hence the Hanoverian succession. She was buried in a square coffin.