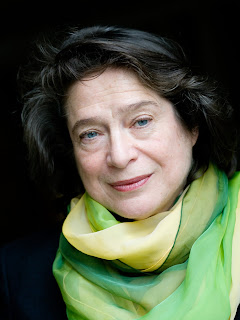 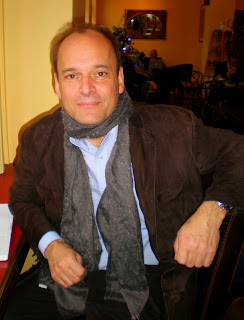 Last Monday I did a crazy thing, the sort of madness to which only London's teeming concert life can sometimes drive one. I had my tickets for the legendary Elisabeth Leonskaja's Chopin recital at the Wigmore Hall already booked when I was asked to interview Louis Lortie (photographed by me above after our Tuesday morning interview; Leonskaja's portrait was taken by Jo Schwartz). I like Lortie's playing but I hadn't heard him for years, so when I found he, too, was giving a Chopin programme on the same night over at the Queen Elizabeth Hall, what could I do? Leonskaja simply couldn't be sacrificed.

The answer was to hear half of both concerts. Lortie's was a whizz through all the Etudes, with Op. 10 in the first part - that would give me time to hop on my bike, speed over Waterloo Bridge and weave through the back streets of Covent Garden to Oxford Street and on to the Wigmore.

I can't say how glad I am that I took that decision - though if I'd started at Leonskaja's recital, I don't think I could have left it. Lortie's was easier only because he served up Op. 10 as sparkling champagne, making light of the virtuosity so that all the essential lines came shining through. Even No. 12 wasn't as heavy as usual, though forceful enough at a carefully-placed climax. I'm glad he wasn't distracted by the horrific coughers, who launched uncovered into an almighty chorus around me before the last chord of No. 3 had faded away.

From the very best cocktail party to a religious service was how it felt at the start of Leonskaja's second half. I'd arrived in good time, since her first had gone on much longer than Lortie's. It had included the Second Sonata, and now she was about to embark on the Third. Incredible not only because she went from Polonaise-Fantaisie to F sharp minor Nocturne to the beginning of the sonata without anyone in the audience moving a muscle in the darkened hall; but also because her colossal sweep included an exposition repeat in the sonata's might first movement.

Heavenly length indeed, as with Richter, Leonskaja's ideal and her duo partner many years back, in Schubert. Here, too, the weight seemed effortless, the expression going ever deeper as in the best meditation: music as a sacred rite. I haven't been so moved at a piano recital since my previous benchmark, Richter in Chichester Cathedral, 1989. I even turned adolescent and sought out the great lady's autograph. 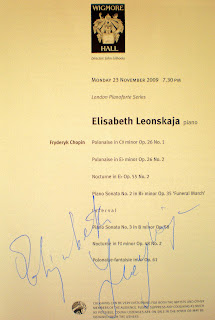 She was charming backstage, less the loftily expressive Athena/Minerva of the platform, and seemed younger than her 64 years. She's back at the Wigmore playing Schubert in May, and as soloist in the Schumann Concerto with the BBC Symphony Orchestra at the Barbican. I can't miss a single appearance here from now on.

A more withdrawn austerity and perfectionism came from German pianist Bernd Marseille at the French Institute on Sunday. He came with another daunting programme: variations by Haydn and Brahms (the massive Handel set) and Schubert's D960 Sonata. It's difficult when you've just heard the very best, but Marseille was certainly impressive. Here he is in the French Institute's striking library with its director Laurence Auer, fast becoming ubiquitous in the social snaps of the blog. 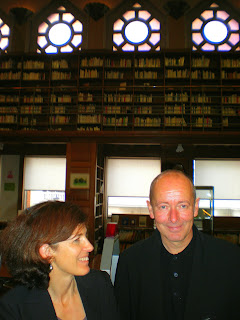 Good news from the Rachmaninov Conference - much of the Duo Va i Ve's programme is now up and running on YouTube. This gives us a chance to hear their powerful espousal of their compatriot Pantcho Vladigerov's 'Pessen' from his Bulgarian Suite

and Rachmaninov's revelatory two-piano arrangement of his C sharp minor Prelude. Do stay with it until the end; there are notes and colours here undreamt of in the original.

Leonskaja is a truly great pianist. I'm glad people are waking up to the fact.