In the midst of life 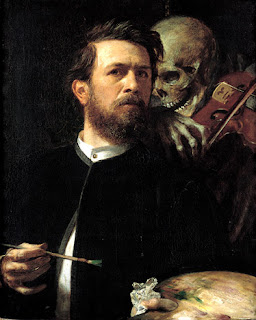 It ought to be 'Adeste, Fideles', I know - which our friends Mary and Roberto's three year old son Lorenzo quickly picked up from the nuns at his Roman pre-school - but my head is rather more full of 'Dies Irae'. The reason being that on Thursday I went into the Radio 3 studio to do my slice of Sara Mohr Pietsch's interval slot on the scary theme, due for broadcast before a performance of Berlioz's Symphonie fantastique in late January.

My brief was to run the gamut from Berlioz in 1830 to Rachmaninov over a century later. The medieval source had already been tied up, and apparently there wasn't much between Lully and his distinguished French descendant, perhaps because of the Enlightenment? The danger is to hear the ubiquitous Latin plainsong chant everywhere and to end up with a shopping-list, but fortunately there were pleasing links. Liszt, whose very modern-sounding Totentanz of 1849 is the next major stop, was there at the first performance of the Symphonie fantastique and helpfully described the finale in question as a mixture of Shakespeare's Macbeth witches and Goethe's Brocken orgies. And Rachmaninov conducted a performance of the Totentanz with Ziloti as soloist in 1902, taking the piano role himself in 1939, the year he recorded the Third Symphony - what sensational conducting - and embarked upon the Symphonic Dances.

Both works, of course, stand alongside the Paganini Rhapsody in using the Dies Irae even more explicitly than in the pre-war Isle of the Dead (my pretext for including Bocklin's self-portrait with fiddling Death above and the more famous image below). 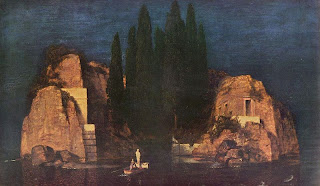 But in the interim, the composer's fascination with the theme is somewhat more subterranean, and as it often merely suggests the chant with the use of three or four notes, it could well be unconscious. My far more Rachmaninov-knowledgeable colleague Elger Niels, who was kind enough to phone me and take me through his own thoughts on Thursday, is especially struck by its transfigured use in the last major song for Nina Koshetz, 'Son' ('The Dream'). It's a consolation here, and in the eighth of the Op. 39 Etudes Tableaux. Playing those examples to Sara and producer Emily Kershaw relieved them of the heavier burden they'd been carrying around with their own obsessive listening: at last a haven! And what a haven is the song in the incredibly ethereal performance of Elena Brilova and Alexander Melnikov.

In an incidental pleasure, I clarified in my own mind what Berlioz intended for that still-shocking 'burlesque parody' in his Witches' Sabbath. Nowadays it's mostly two unison tubas with the four bassoons, an option the composer allowed for; but he preferred two ophicleides or big bugles because the sound down there is rougher.

He even had an option in his manuscript for one of the two to be a serpent. 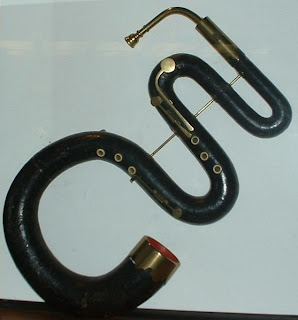 I love what Berlioz writes about this proto-bass ophicleide in his Treatise on Instrumentation:

The truly barbaric tone of this instrument would be much better suited for the bloody cult of the Druids than for that of the Catholic church, where it is still in use - as a monstrous symbol for the lack of understanding and the coarseness of taste and feeling which have governed the application of music in our churches since times immemorial. Only one case is to be excepted: masses for the dead, where the serpent serves to double the dreadful choir of the Dies Irae. Here its cold and awful blaring is doubtless appropriate; it even seems to assume a character of mournful poetry when accompanying this text, imbued with all the horrors of death and the revenge of an irate God. 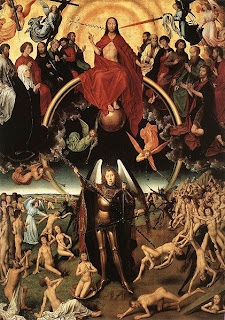 In place of 'cold and awful blaring', George Crumb achieves last-judgment wonders with his four sets of tom-toms and seven trumpet tuckets in Star-Child. That was among portions of the unforgettable Total Immersion day included on Radio 3's performance slot yesterday evening. I was there live in the studio to comment with Petroc Trelawny, and there was plenty to react to: Echoes of Time and the River works so much better when you don't have to watch orchestral players looking embarrassed at having to sing and process and play unfamiliar instruments. It's available on BBC iPlayer for the next five days. The other works from the two concerts are going out late on Boxing Night.
Posted by David at 18:24

I was on my way to post my latest comment about musicals, etc., and found this! I did not know that we had any examples of Rachmaninoff as a conductor, nor whether or not he even did that.

Thank you _VERY_ much for your _FASCINATING_ comments, helped by Berlioz himself, re the _Symphonie_ _Fantastique_! I think you can guess whose recording of that I have!

Rachmaninov was one of the greatest conductors ever, as was quickly accepted in Moscow in the early 1900s. Alas, the hicks at RCA didn't realise the value of what they had, and a proposal to record the Symphonic Dances was rejected as not likely to sell. So all we have are the Third Symphony - unsurpassed still - the Isle of the Dead (with cuts) and the Vocalise.

At least there's nine CDs worth of Rach the pianist, again the greatest ever, possibly.

Sir Charles of course, with the RPO, paired with a frequent coupling, the _Roman_ _Carnival_!

Again _MOST_-interesting re Rachmaninoff the Maestro! As for Rachmaninoff the virtuoso pianist, I heard once that he felt there was someone who played his _Second_ _Piano_ _Concerto_ better than he, though I forget who. I have also heard it said that he did not want that work over-sentimentalized, though that music seems to have a good deal of "schmaltz" built in. Though he grew tired of his famous "C-Sharp-Minor Prelude," it was good to hear him play it, in full modern stereo, on _CD_ _Review_ a few weeks or so ago, though hope what we were given indeed accurately reflected how he played it on that occasion. I only know the basics of piano rolls, but cannot how quickly the pedal is pressed reflect tempi to the extent that we do not know whether or not we are hearing them as they were originally played?

Ah - I wasn't aware there was a Mackerras Symphonie fantastique; those RPO recordings often slipped under the radar.

If I'm not mistaken, weren't the Rach-as-pianist recordings brushed-up versions of his 78s, rather than the piano rolls? I have the as-new set to hand, must give them a listen.

These may indeed have been brushed-up 78 Rachmaninoff, but I am not absolutely certain.

This coming Saturday's _CD_ _Review_ seems as if it will be interesting. Hopefully Dr. Vickers will bring forward one or more first-rate Handel oratorio recordings which I have missed since, for me, there have not been too many such this year.

Another Dies Irae, albeit arguably a less significant one than the others you mention, occurs in the Brazilian Impressions of Ottorino Respighi.

The second movement was inspired by a visit Respighi made to the Instituto Butantan in Sao Paolo which has a specialty researching venomous animals and developing antidotes; it houses an enormous population of poisonous snakes. Resphigi remembers the visit in eerie music depicting the slithering, rattling creatures while the Latin chant appears as a descant for high strings--one of his tours de force of orchestration.

Thanks for that, Will, exactly the sort of comment that leads one on. I'll consult my Dorati recording imminently.