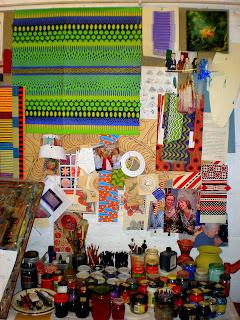 Of course I'd prefer it if you bought someone an Eritrean donkey for Christmas (believe me, we tried some time back, but the organisation was not as user-friendly as it might have been). If, however, you must go in for seasonal merchandise, do it in style and visit my friend Cressida Bell's online shop.

Cressida had an open studio weekend in her Hackney enclave, as always. We dropped in on Sunday. Having indulged myself on the previous visit with a very bright tie, I bought the godson one this year from the wacky range of monuments (his isn't among this batch, so if he sees this entry and he doesn't like the one I got him, the artist will swap it). 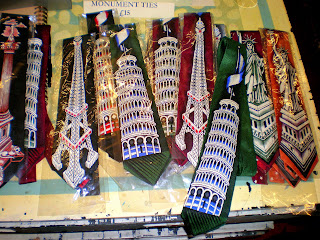 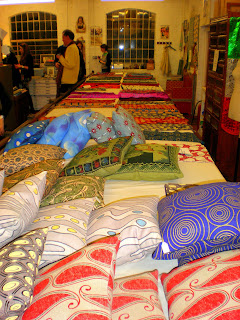 Yes, it's in the Bloomsbury line but not, I think, too derivative. And this year Cressida has produced what I think is her best card ever, a Ravilious-style view of rooftops, hills and sea inspired by her mother's stamping ground on the South Downs. Must go and see the Raviliouses in Eastbourne, and we're planning a trip to exotic Bedford for the Edward Bawden exhibition. 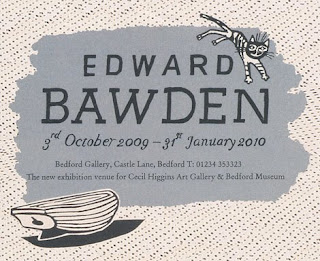 Alternative to the Bell Shop, if you're looking for something cheap and cheerful: how about a nice bunch of sprouts, fresh from Loddon? 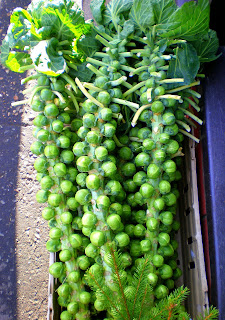 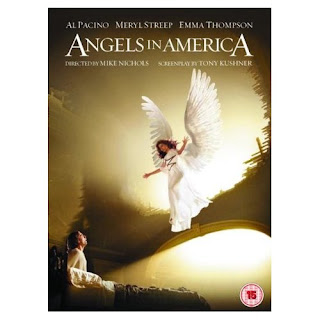 The human complexity of all the characters, led by what must be Al Pacino's greatest performance ever as Roy Cohn, made it hard to watch the Coen Brothers' new film, A Serious Man. This, too, is well acted, and the cinematography is good as ever, but why the cardboard cut-out goodies/baddies? Surely it isn't interesting to choose as your hero a man to whom things just happen? Take away the local trimmings, and A Serious Man is just another of those movies about a dysfunctional American household. Its start never links to the leap-forward in time, and it ends just as purposelessly. I couldn't have cared less.
Posted by David at 10:04

from Catherine Nixon,
Clare College, Cambridge
I did enjoy Angels in America; like all DVDs now I watched it projected onto a screen eight ft by ten ft, with stereo JBL cabs on each side, far superior to any TV screen, and not too expensive - you just connect your DVD player onto a DVD projector and find a pure white wall. But why all that flapping about by Emma Thompson in white and then black? I just didn't get that side of it at all. I accept that the cinematography of this was excellent, but what did it all mean? The story of the doctrinally-repressed Mormon couple, with their fruity "Temple garments" was well done. Oddly, New York City as a "celluloid character" kept its distance in the film, apart from at the very beginning, with Meryl Streep as the ancient rabbi.
Catherine Nixon
Clare College, Cambridge

Catherine Nixon said...
This comment has been removed by a blog administrator.
2 December 2009 at 16:04

Sorry, Catherine - for some reason your post came up twice. Did you object to Em's angel flapping or what she actually said while she flapped? I find all that magic realism - the result of the protagonist's ilness/drugs - beguiling and very ambitious of Kushner. Any pretentiousness is undermined by our hero's bewildered reactions. And the angel sex is a pretty wacky idea.

I wonder what became of all that younger talent? They're superb, each and every one of them.

from Catherine Nixon
I didn't object to anything Emma Thompson's Angel character said or did - I just didn't understand what she was about in the context of the film. I understand the delirium of the hero, but what did the angel signify? Would you enlighten me please.
The google searches for David Nice Blogspot number 97 million, while IBM is a mere 26 million and Shell Oil 42 million. You are turning into a mega-multi-national corporation with global internet presence, David!
Catherine Nixon, Clare College, Cambridge.

I'd like to thank that was all about me, but I fancy it's more to do with blogs, millions of Davids and lots of people saying 'nice blog, David'.

Mind you, I have no idea of my readership and can't be bothered to find out (or rather, I did at one stage but it was hassle and I could be badly disappointed). I know a substantial number is notched up on the profile, but that's only the profile. I hope.

The angel in America is not very rational - opportunity for some high-flown millennial stuff and the other characters' very amusing reactions to it.

Mind you, I'm only three quarters of the way through this time, so I need to watch it until the end to remind myself of the point (and why Em turns up in black, for that matter).

I rather dread to think what Peter Eotvos can have made of it all in a short opera, knowing his thorny style as I do. We get a chance to see at the Barbican next year...

Do give the opera version a fair hearing. We had it in Boston some years ago produced by the invaluable Opera Boston with Tom Meglioranza as Prior.

It is, of course, majorly condensed but it played very well in an intelligent production, sold out its limited run, and was much praised in the press.

Well, I'm nothing if not capable of changing my mind. The concert cast looks good, and it's linked to my BBCSO course, so I'll certainly go.