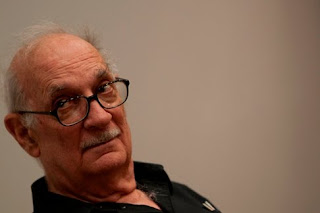 'It's easy to write unthinking music' quoth Virginian one-off George Crumb (pictured above at yesterday's BBCSO Total Immersion event by Simon Jay Price). 'But I don't think it's a good thing to create less than good music in a world that's full of a lot of indifferent music.'

Maybe he was thinking of dashed-off pop, but I take that remark to mean indifferent contemporary, 'serious' music. Crumb at 80 doesn't seem to have composed anything that fails to engage at least the curiosity as well as the intellect. If yesterday's two concerts suggested that he touches the metaphysical better with a handful of players whose talents and personalities he knows than when he traffics in large forces, it was still a privilege to hear both sides of the coin. Hopefully my Arts Desk review puts that across.

One aspect I've not mentioned there is the beauty of his written or printed scores. You can get a sense of this from the 'Spiral Galaxy' page of Makrokosmos Vol. 1 which Joanna MacGregor left behind on the piano after her scintillating performance (we met her later, a little dazed by the event). 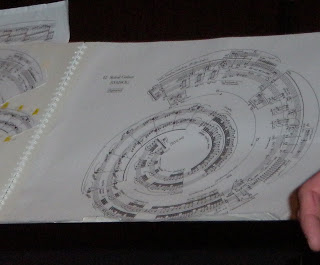 I also didn't mention how much fun Crumb can be, both as a person and a composer. The new film just released on DVD - three quarters recital, one quarter documentary - spotlights several character sketches of his doggie friends from the recent Mundus Canis. 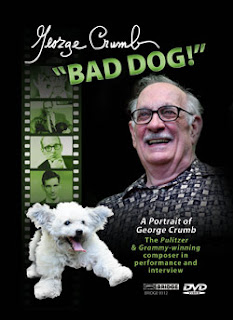 Why should the feline species get all the best tunes, he drily asks. There's also a spellbinding performance by Robert Shannon of Eine Kleine Mitternachtsmusik, Crumb's homage to a theme by Thelonius Monk. Guitarist David Starobin, who made the film and also features in it, was a sensitive companion in the afternoon talk yesterday; Stephen Montague seemed a little more, shall we say, self-oriented. His foyer piece didn't match up to the master, but it was fun to see the black- and white-masked kids putting their hearts and souls into the project. Here are some of the balcony artists bringing the Barbican environs to life. 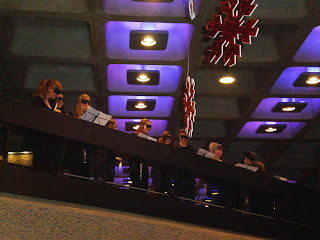 from Ms Tammy Travers
I agree with Catherine Nixon's remarks in a recent blog about the superiority of projected DVD over even LCD TV. I have just watched Barenboim's Ring and Harnoncourt's Magic Flute on projection, with the sound delivered, stereo 5.1., through Sugden amplifiers and Meridian speakers and both works were absolutely fantastic, and the much larger image on projection is so much more satisfying than even fairly large TV screens.
The best thing about Angels in America is the monstrous Roy Cohn - decades after the execution of Ethel and Julius Rosenberg it was disclosed by the US Governement that the secrets they supplied to the USSR were only medium-grade sensitivity - certainly not worthy of the death penalty and Ethel's children becoming orphans. Roy Cohn would almost certainly have been informed about this as chief prosecutor, but still he pressed on with securing their execution.
Tamsin Travers

Funny thing is, I even felt a bit sorry for Pacino's Cohn, if only for a few moments (especially the rollercoaster deathbed scene where he's parrying with Streep's amazing Ethel). That's the genius of the Kushner play: everyone becomes human at some point.