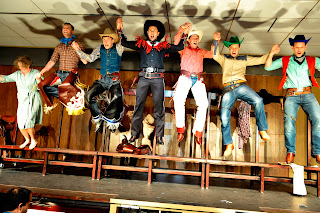 Yee-haw! Three days on, and my heart still belongs to Berlin. Irving Berlin, that is, who passed his early years as Isaiah Beilen speaking Yiddish in a Byelorussian shtetl and graduated to write words-and-music numbers that are glories of the song form equal to those of Cole-y and Noel-y. I knew we couldn't fail to enjoy Annie Get Your Gun at the Young Vic, given the songs and the off-centre light Richard Jones was bound to shed on it. But could Jane Horrocks, pictured here in one of the Young Vic production shots taken by Keith Pattison, really 'do' an Annie Oakley to match Ethel Merman and Kim Criswell? 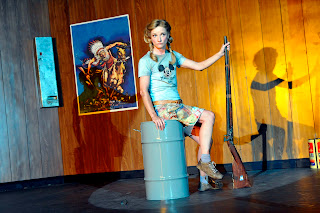 Well, she did it on her own extraordinary terms, with a little help, I guess, from Jones and a presumably superb dialect coach, and she was so charmin', darn' it, that I had tears in my eyes from the moment she turns up as a confident, wide-eyed teenager and charms the pants (another yee-haw) off the macho Frank Butler of the all-singing, all-strapping Julian Ovenden - and everyone in the audience, I guess. 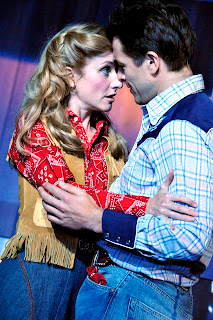 We knew our Bubbles had a bit of a pitch problem from her Little Voice (great impersonations, less spot-on with the notes), and this show suggests she may have discovered more comfort in the mezzo range. But as an ingenue with the most peculiarly winning twang 'doin' what comes nat'ru-lee', she banished all memories of anyone else. There's no weakness in a very all-inclusive cast. Everyone sings a lot (including some splendid a cappella harmony), gets round the need to dance in various ingenious ways, and is blessed with inspired support from four consummate pianists in brilliant, almost pianolaish arrangements by Jason Carr. 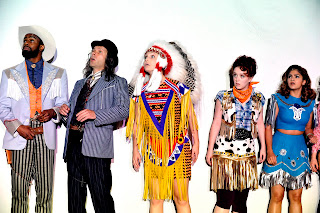 I won't spoil any of the Jones sight gags, as for instance what the above accompanies, or the fun of the Ultz designs; if you haven't seen it, go, go, go, before it closes on 9 January. Take the whole family, if you have one, or borrow a friend's; small boys will love the cowhands and the dignified Indians, the little girls will want to BE little sureshot Annie, and everyone will want to sing along to 'Anything you can do'. And probably to half a dozen other numbers, too, because I can't think of a musical with a higher stock of infectious tunes which fit the words like the classiest of speech-melodic gloves. Verily, it's the Carmen or Figaro of the musicals world in terms of stockpiled hits.

The feelgood effect lasts, I'm anticipating, for a very long time. I'm back with the Criswell/McGlinn spectacular on EMI, admiring the way that even the second song for the second-string couple and the one which got an earlier chop are just as catchy as those we know and love.

Enjoyed what I read in a very well-produced programme about the real Annie and Frank. His history is almost as amazing as hers, and it really was one of the great love stories, all 50 years of it. While the show sassily updates the action to the time of the musical's composition in the 1940s, Phoebe Ann Oakley challenged an all-male world in 1875 or 1881 (sources differ; the first would make her fifteen years old) when she won a shooting match against the man who became her husband soon afterwards. 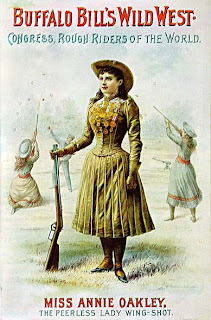 The rest is history; she really did meet the world's great leaders, though not the ones encountered in an hysterically funny film at the start of the Young Vic show's second half.

Here she is in later life 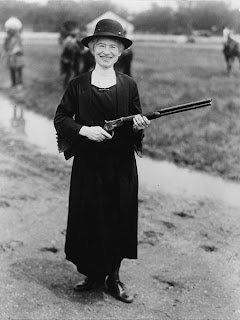 and, most amazingly of all, YouTube has footage of her prowess back in 1894. That's a little bit of history, ain't it?

As for the sharpshooting Richard Jones, he goes straight on to Prokofiev's The Gambler at the Royal Opera. I'm mighty proud that he called upon me for the programme, which was going to happen anyway, and for a study day at the end of January, which wasn't. He has not forgotten the Prokofiev chap since our chat about The Fiery Angel all that time ago in the First Out cafe, when he seemed very struck by the notion that Prokofiev had nearly died from scarlet fever and seemed (to me, at least) to reproduce delirium extraordinarily well. How that resulted in the Monnaie show I don't know as I had violent food poisoning on the day I was due to take a then-functioning Eurostar to Brussels.

Anyway, I get to talk before, and with, two of my idols, Jones and Pappano. One of several big Prokofiev-related treats to look forward to in the New Year.
Posted by David at 18:54

One mention of the catchiness of the songs for the second couple and there goes 'Who do you love, I hope' lodged on my internal jukebox for the next week.

Oh, good - it's so jolly, isn't it, and every inch a match for 'I'll take a chance on you'. Shame it had to go out of the window in the current show.

Mind you, so did 'I'm an Indian too', which has ingenious whole-tonery but of course slightly dodgy lyrics. Jones had a nice homage to the Cabaret film's getting round some of the songs by having it played over a tannoy which Sitting Bull destroyed with a single shot.

You see how I don't know these extras well enough - the first duet is 'I'll share it all with you'. Can sing the toon, though.

The last extra is 'An old fashioned wedding', an adorable riff on the G&S double-chorus principle.

Current obsession: Kern/Hammerstein's 'The last time I saw Paris', meltingly done by Hampson. Has to be sung with respect for its 1940 lump-in-throat bittersweetness.

Thanks for the pictures of this production which we talked about briefly a couple of days ago. The thing is really put together extraordinarily well, even for an era in which structure was the icon in writing works for the stage. Annie was the first show I designed professionally.

I wish we could have Pappano at the MET. There needs to be a charge of new energy there, particularly in Wagner. We keep reading wonderful things about him.

Yes, Pappano has given the Royal Opera a real buzz and sense of confidence (the same applies, I gather, to Monica Mason and the Royal Ballet - she's present at the start of every performance. And to Gardner, scoff as the Pareterreists may, at ENO - his Grimes and Turandot were electrifying).

Mind you, on the evidence of Pappano's Ring I wouldn't yet wish him on you as your top Wagner man. Jurowski, yes.

So you still have not yet gotten to his _Tristan_?

Is Mr. Hampson's "The Last Time I Saw Paris" on his new CD, the contents of which I did read but now have forgotten?

I may need to give this McGlinn _Annie_ a go, though must rein in my expenditures just a bit since I have been a bit freer of late than perhaps I ought.

Yes, and I found it very beautiful, but still - the sweep? And I never thought I'd convert to Goodall, but his Tristan is just oceanic.

Hampson sings 'The last time I saw Paris' better than anyone I've heard on the Jerome Kern Songbook (also McGlinn and EMI - have these not been deleted? The Miles Krueger notes are indispensible). Some of the early stuff is twee but then you hit the later heights. TH also does a wonderful 'Folk who live on the hill'.

Again I am at a disadvantage for not being able to follow this, or any other, recording with a score, but, from a purely-subjective point of view, I personally prefer my _Tristan_ on the mercurial side (e.g., Boehm/Bayreuth), and I feel this Papano falls into that category. I have not heard the Goodall, but was interested to hear that, when the Bernstein was being recorded, Dr. Boehm attended at least one session, and told the maestro afterwards that he had now heard _Tristan_ for the first time. I think I have written here previously that I like Mme Stemme's Isolde quite much, though the Act-II love duet does not move me quite as much as on the Boehm, with its softer dynamics in places (again one longs for a score to find out what saith Wagner). I think the outer acts are quite stunning, particularly Segnor Domingo's performance in Act III!

Today, good sir, I did it, I did it, I did it! I said that I might buy it, and indeed I did! And that for under $6, including p&p! And I must _HEARTILY_ agree about the value of Mr. Krueger's notes since I have read them for both of the McGlinn recordings I have and mentioned! And this other Hampson disc, were I to buy it as well, would be more Kern, for which he seems to have a special affinity, having apparently written an entire book on _Show_ _Boat_! Assuming that it is included, I hope Mr. Hampson does well with a special favourite of mine and presumably others, "All The Things You Are," though it is an ensemble number in its original context if I am not mistaken. I can imagine him singing "The Song Is You."

Now a bit under half an hour until I am hopefully off to King's College Chapel via radio!

The Kern disc isn't all Hampson by any means, JV: he only pops up to sing the later masterpieces, including 'The Song is You'.

Season's greetings to you.

The comment that Irving Berlin was originally named Isaiah adds a new dimension to the history of Irving's visit to Downing Street during the Second World War. Isaiah Berlin ( philosopher, historian of ideas, later OM) was then attached to the British Embassy in Washington and his despatches impressed the Prime Minister, so that, when Mrs Chrurchill returned from a charity event and reported that a visitor called Irving Berlin had been very helpful, Churchill took the supposed opportunity to meet Isaiah and invited him to lunch. Irving was flattered by being seated next to the PM and by the PM's requests for his views on the position of Hitler, Russia etc etc - whereas Churchill was somewhat puzzled until all was revealed. We can in any case be very grateful for the two concepts of culture left to us by the Isaiahs

The concept of Pappano-as-hero is supported by the spontaneous comment made to me by Hans Werner Hense after a performance of Birtwistle's Minotaur - that Pappano as a conductor was a genius.

The cynical might say it had something to do with the fact that it now transpires Pappano is to conduct the world premiere of Henze's latest...but I'm sure he was sincere.

Well, now we've had to make horrid lists over at the Arts Desk and among my top ten I settled on Pappano among the supremos because he has the biggest ship, and repertoire gamut, to run; and has done both impeccably. I except the Wagner, but you don't care about that, do you, Mr. D?

I certainly do care, since Wagner is an evil force

It could not last.
Wagnerians shouting "Ho!!
Unreason is unleashed !!"
restored the status quo

(With aoplogies to J C Squire)