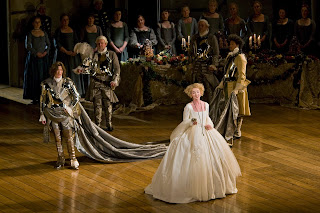 You know there's something wrong in Strauss's Der Rosenkavalier when a Marschallin lacks personality and Sophie Anna Barbara von Faninal, in effect her younger self but with a better chance of happiness, makes more of an impact. So it was at Covent Garden yesterday when Lucy Crowe showed more spirit and voice than Soile Isokoski's not very endearing Marschallin. I had her picture here, but as the Royal Opera seems to be the only organisation that doesn't, as it stands, like blogs using their publicity photos, I've had to replace her with the equally good Sarah Tynan receiving the silver rose from Sarah Connolly's Octavian in the McVicar production at ENO (photo by Clive Barda).

I won't write more about the less well co-ordinated Royal Opera show here; you can see what I thought - with pictures - on theartsdesk.

What I will say is how it rather reinforced what I've always felt, which Kate Hopkins expands upon in her Colette-oriented programme article: that Sophie is more than just the ordinary young girl dismissed by Hofmannsthal. She lacks the experience of the Marschallin, but she shows every sign in her indignant diatribes against a horsebreaking potential husband of becoming as wise as Resi. David McVicar's original Scottish Opera production pointed up the parallels by giving both women the same baby-doll wig. I've only seen one weak Sophie on stage, Patricia Petibon in Vienna. The others I best remember were all lassies of great spirit: Barbara Bonney, Lisa Milne, Rosemary Joshua, Marie Arnet stepping in for Sue Gritton and lighting up the stage as no-one else did in that ENO revival, Tynan and now Crowe. Just for the hell of it (and because a second Royal Opera picture had to go), I've edited my own perfect-rose picture for silvery inclusion here.


Crowe phrased 'Wie himmlische, nicht irdische' more ecstatically than anyone I've ever heard on stage - though no-one can surpass Lucia Popp here. Her Sophie and Walter Berry's Ochs, even more meticulously detailed than Peter Rose's last night, go with Bernstein's spectacularly stretched-out vision on the CBS Rosenkavalier so recently reissued by Sony. It may not be a standard, but no-one who loves this opera should fail to snap it up. 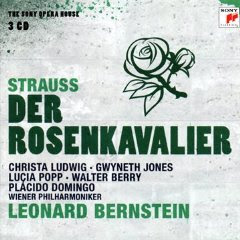 Well, I have been an old grump this week over two operas I love so much being only half-cooked ('ist mein Leiblied, weiss sie das?', I could say of Rosenkav). Sir Colin Davis's Verdi Otello in concert irritated more than it delighted me. I went back to the second of the two performances on Sunday to check I wasn't being too dyspeptic about the stand-in, Simon O'Neill. He did a good job under the circumstances, but Shakespeare's Moor he ain't.
Posted by David at 13:01

Good to read your thoughts on Rosenkav (which I'm seeing on the 18th and 22nd), but particularly about the Bernstein recording. Does he have the lightness of touch for so much of it...?

Saperdidix, Gavin, you're not going twice? Even though Rosenkav is my favourite opera in the whole world (followed closely by Don Carlo/s), I couldn't put up with the shortcoming of a gaping hole where the heart of the piece should be.

Bernstein - lightness of touch? No - best in that respect, I think, is Edo de Waart on my personal favourite (Philips, with Flicka). But you know Lenny, he can always pull out something extraordinary, and the psychological detail is so amazingly exposed at slow but intense tempi. Ochs especially comes over as a very three-dimensional character.

I am going twice... and am willing to believe that the gaping hole may close up a little during the run. In any event, I can't miss the opportunity. Am going once with a bunch of Vienna freaks and then once with 'im indoors. It is 'our' opera... we had silver roses at our bash in May.

Our is Gianni Schicchi - sang in a performance together up in Edinburgh 21 years ago where it all began.

You also need genuine Persian attar of roses to sprinkle around your guests - I still have a little left from a $5 bottle bought in Kashan, city of rose-oil and dyers (very Straussian). None of the Iranian shops in London seems to stock it, so I'd love to know if anyone does.

For me, the best recorded Sophie, at least as far as the presentation of the rose is concerned, is Persson on DVD.

I'm having a tiny holiday in New York in the new year which will include Rosenkav at the Met, with Fleming and Graham but Schafer- a lovely singer but surely not a Sophie.

Actually I had a feeling this was going to conjure the Persson-lover. Yes, that's a good one, and the Carsen production brings it all alive. Also rather interesting on DVD is Maki Mori, though she's overshadowed by the superlatively gorgeous Schwanewilms's Marschallin.

But you should see Crowe - see how the Parterreists scream anti-Brit nonsense without even having heard her - and marvel.

Guess you saw that your adored Miah is singing Anne Trulove at Glyndebourne next year? That should fit her lovely personality like a glove.

Enjoy NY. I only hope Fleming has discarded some of the vulgarities which used to make her Marschallin (especially with Thielemann) so intolerable.

Gianni Schicchi is our other opera! We have sat a couple of times on the steps of San Miniato al Monte and listened to it... " Firenze da lontano ci parve il Paradiso!" gets us every time.

Must get the Carsen production on DVD, though on the Facebook page for my blog there is a certain push for the new Theilemann DVD (with Jonas Kaufmann as the tenor, no less).

Saw the clip of Jonas's Italieniesches Tenor - impressive in its way, but far too dark. Must see the rest of that. I think it's Beczala on the Carsen, who is exactly right. In fact, he sang it at the Zurich Opera concert performance and a friend of a friend who'd never seen it before was bitterly disappointed to hear that the tenor wasn't going to come back.

I have only heard a little of Miss Crowe thus far, but like what I have heard, notably in a broadcast of Handel's _Alexander's_ _Feast_. I would like to become better acquainted with her art.

As I may have told you, _Rosenkavalier_ only entered my collection relatively-few years ago, in the apparently-famous E. Kleiber recording from the 50's. I especially like the VPO's playing in that, with all those apt audible shifts in the Strings! Yet I sometimes wish for a bit more sensuality from some of the singers, though could that just be due to an older singing style than that which we usually hear now?

Hoping that this finds all of you well, and with renewed best wishes,

p.s. As I may have previously told you, I think that either _Don_ _Carlo_ or _Forza_ would be the next Verdi opera I would like to experience.

The E Kleiber is still the best, I reckon, all things considered. No orchestra can do the sugary glissandi in the waltz like the VPO here. And I like Reining's Marschallin, molta simpatica.

Whereas one of the greatest turkeys of all time has to be Karajan's lumpy Philharmonia version (cut, unlike Kleiber's), with the unbearable tight-lipped Marschallin of that Schwarzkopf woman.

C Kleiber sweeps the board of trad Rosenkavs on DVD with Gwyneth, Fassbaender (best Octavian ever?) and Popplet.

Rosenkavalier was far from half-cooked last night... from "Mein lieber Hippolyte, heut haben Sie ein altes Weib aus mir gemacht!" onwards, I was incredibly moved by Isokoski. Crowe and Koch on terrific form and, being sat above the pit, it was a thrill to watch Petrenko's lavish care for each detail in the score... still allowing great sweep.

Well, I suppose it's possible for an undercooked revival to warm up as some of the singers find their ways into interpreting as they go along.

It struck me that Rose and Crowe had both 'done' the McVicar, so had human characterisations already to hand. Maybe the others just evolved. But Allen would have had a VERY long way to go from not knowing his part at all well. And miracles must have happened with Isokoski and 'mein liebe Hippolyte'...there wasn't a wet eye in the house on the first night.