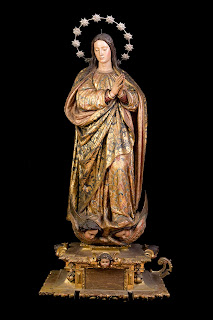 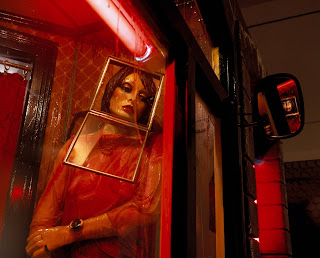 My favourite building in the world in terms of what it contains, the National Gallery, is currently more than living up to its dynamic manifesto. Not only can you see Cezanne's big bathers and other nudes on the same wall as Titian's fiftymillionpounder Diana and Actaeon in the main gallery, with a stag display opposite; two exhibitions also hit very different heights.

The Sacred Made Real is represented above by the Virgin of the Immaculate Conception, circa 1620, from the workshop of Juan Martínez Montañés (1568–1649), normally lodged in the Iglesia de la Asunción, Seville (photo from the National Gallery © Imagen M.A.S. Courtesy of Universidad de Sevilla); and a still familiar Amsterdam scene, where all the whores' bodies are modelled from life and their bizarrely framed heads taken from shop mannequins, is part of Edward and Nancy Reddin Kienholz's Hoerengracht 1983–8 (photo also NG, © Kienholz Estate, courtesy of L.A. Louver, Venice, CA).

About the walk through the red light district - the Kienholzes have simply added an 'o' to the name of the poshest Amsterdam canal, the Herengracht - I'll say only that you should experience it for yourself, and be convinced by the introductory link to Dutch genre painting.

The Sacred Made Real has seriously dented my religious scepticism, waxing monstrous since the Jerusalem experience and further fuelled by dipping again into Voltaire's Philosophical Dictionary. There in the fabulously atmospheric half-lighting of the Sainsbury Wing's ever-adaptable exhibition space, you come into awesome contact with the chastening, sometimes horrifying, realism of the 17th century Spanish sculptors in wood and the elaborate work of their artist colleagues.

The polychrome statues are infinitely more expressive than waxworks. I was reminded of strange dialogues with living sculptures in Rome years ago when here I came face to face with Saint Francis Borgia as carved in wood c.1624 by Montañés and painted by his genius equal Francisco Pacheco. Again this comes from Seville's Iglesia de la Asunción(© Photo Imagen M.A.S. Courtesy of Universidad de Seville). 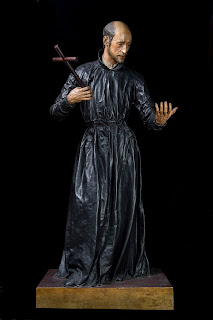 The then newly-beatified nobleman-turned-Jesuit has been 'made up' by Pacheco with brown to accentuate the cheekbones, black eyelid liner and eggwhite varnish to the eyes. His tunic, like that of the nearby Saint Ignatius Loyola, is of real cloth stiffened with glue. Of course the polychrome woodwork can also be used to convey horror, as in the hideous anatomically correct muscles inside the decapitated head of Juan de Mesa's John the Baptist, and the seeping wounds of Gregorio Fernandez's Dead Christ.

There are only thirty exhibits, but each deserves special care and reflection. The reason for seeing these works here rather than in situ, which I'd also like to do in time, is that the National Gallery has placed the painted carvings alongside several great pictures which, the argument goes, might have been inspired by the new sculptural art. I'm very fond of Velazquez's early portrait of the Immaculate Virgin standing on the moon, but the clear masterpiece is Zurburan's 1627 Christ on the Cross, lit as originally intended from the right. This reproduction (image courtesy NG and © The Art Institute of Chicago. Robert A. Waller Memorial Fund 1954.15) can't convey the way it hovers as a light in the darkness. 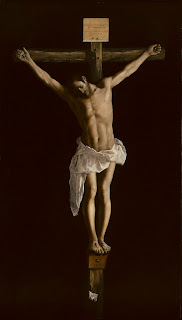 So we wandered out into the wet Monday and the near-deserted streets of pre-Xmas London. And there was the Borgia saint again, watching over one approach to the fairground follies of Leicester Square. 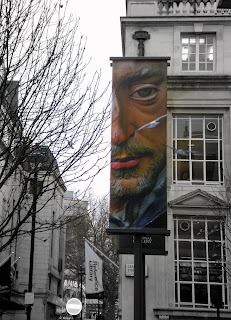 All this was serendipity, as no trains were leaving from Charing Cross for Rye and the in-law. So we compounded the unexpected NG spell, including this view of Nelson from the seasonally-decorated windows of the cafe, 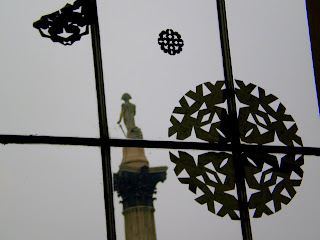 by following it up with lunch at Sheekey's oyster bar 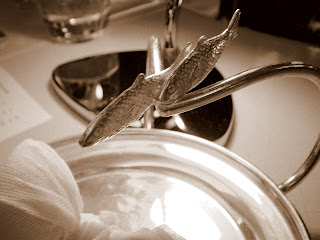 which always serves up the best fish stew I've ever tasted and an all-seasons hit of Scandinavian frozen berries melted by hot white chocolate sauce. 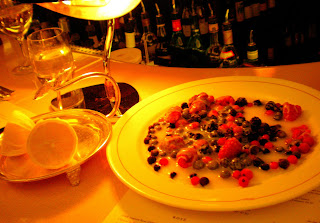 Plenty of work remains to be done, but such interludes of sheer indulgence are increasing as indeed they should now that we've decided to stay put for a bit. And the diet of show CDs is very, very nourishing.

Since J suggested the snappier title above (I had 'polychrome to Hoerengracht'), I decided to indulge in a happy summer shot of the painted lady butterflies which came in their thousands this year from the Atlas mouintains and reached as far as Scotland, where we found them posing on the Lambtons' alchemilla* with a red admiral. 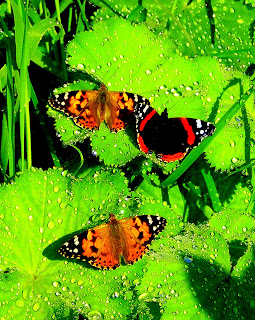 A necessary reminder of what's only six or so months away now that 'the worlds whole sap is sunke...life is shrunke, Dead and enterr'd'.

*now buried under inches of snow. Peebles seems to be something of an epicentre.
Posted by David at 11:59

Sorry, punters, the above comment was meant to be a response to Will's on the previous thread.

Ciao David
As always you make me envy the richness of life in your corner of the world. Almost feel like hoping on - gasp - Ryanair and seeing both exhibitions. Many thanks.

Wanted to respond to your comment about Trieste but couldn't find an e-mail address. We stayed at Le Corderie - a very charming boutique style hotel - great staff, wonderful breakfast - only down side is that it is about a 10-15 minute walk to Centro which is fine going but all uphill coming back. Not sure if that is much help.

Oh, thanks for that, Will, and all seasonal wishes to you both who celebrate Xmas in so much more style!

Well, I do recommend this exhibition as a total one-off worth travelling to see, Likewise I should book for the Caravaggio/Bacon exhibition in your eternal city. Saw the catalogue which a friend had bought back, though the Bacon Oresteia triptych which so took my fancy apparently isn't on show...

David, thank you for writing about the Sacred Made Real exhibition at the National Gallery. I my humble opinion three works are spellbinding and worth the entry alone. The first is, as you rightly say, the marvellous (in all senses of the word) depiction by Zurbaran of Christ on the Cross. It's not only the lighting that's worthy of attention, but the passage work in his depiction of the cloth that surrounds Christ and gives Him a degree of privacy. It's a case of how many shades of white can you see (a similar instance of this is Monet's fabulous painting of the ice breaking up on the Seine in the Gulbenkian Museum in Lisbon). The simplicity of the form offers a sense of monumentalism, akin to Fra Angelico's Crucifixion in the Louvre which, incidentally, also has a black background. Concentrates the mind wonderfully.

The second piece in the show that's worth the entry is the lovely, and humbling, statue of St Francis in the third room: standing in near darkness this tiny figure begs attention. The silver foil behind his eyes make it appear that his eyes are wet and hence that he is alive. The little bone teeth are good too, but it's the simple rope, knotted several times, that gets me (as well as his stance). To call it a "statuette" would be criminal because it's so much more than that.

And finally, the portrayal of St Serapio - the sole painting at the end of a long rectangular room , beautifully lit not only by the National Gallery, but also by the artist (is it a Zurbaran? I can't remember). He hangs on his ropes, head down at a diagonal to the torso.

Yes, Colin, the St Serapion is by Zurburan (whose Virgin of Mercy of Las Cuevas I also loved). Imaginative the way they put it in the last room by itself in a 'Sala de profundis'. I was fascinated but a little repelled by St Francis's teeth.