Changing London for a letter 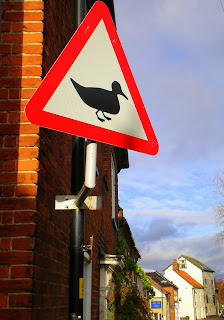 Which means Loddon, just south of Norwich, that great city where we spent a blissful few hours on Friday afternoon looking around the cathedral after dark. And for Londoners seeking purer air and wanting to swap an n for a d, there's one extra enticement to Loddon now that the adorable Katherine Howard, ex-Sony and EMI gal, and her equally good-natured husband Andy Walter, who I'm delighted to say is still restoring historical recordings at EMI despite all the vicissitudes there, have turned the barn of their mill house (seen in the photo beyond the duck sign) into a concert hall. 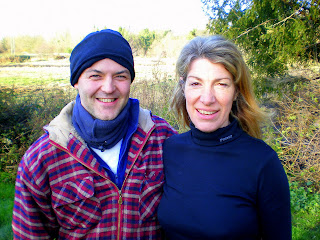 There was a big event last year, with the first-rate Henschel Quartet (whose latest disc of Mendelssohn and Bruch is sheer delight). But the launch of more and grander things to come, now that Katherine has her lively brood of four more or less sorted, happened on Friday night. Katherine used to go salsa dancing with a quirky and delightful chap who's now leader of the second violins in the Royal Opera Orchestra, Jan Schmolck. He and his pianist wife, Frances Angell, formed two-thirds of a trio but found that co-ordination with the cellist, who lived a long way from them, had become tricky. Now they've collaborated with some of the leading players in British orchestras to set up the Turner Ensemble, which launches an official residency at Kings Place on 17 January.

The Mill Room wouldn't accommodate the sort of larger-scale ensemble they have in mind for their first, enticing Kings Place programme, so the Angell-Schmolcks came to Loddon with one of the finest horn players in the UK, Roger Montgomery. 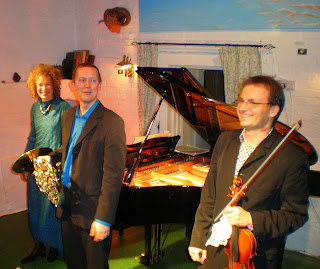 They delighted a packed crowd of locals, Norfolk based musicians and sundry Londoners who'd come specially, including ourselves, Phil and Susan Sommerich, and the inestimable Andy Stewart. His article about 'Mill Power' in the 7 November issue of Classical Music eloquently says all that needs to be said on the subject.

Except, of course, how bracing the launch was, since it hadn't happened then. As I know from the players who visit my BBC Symphony classes, our orchestras have within their ranks instrumentalists as good as any who appear at the Wigmore or the QEH. Better than most, I'd hazard in this case, because Frances plays with such restrained power that you'd never know what a struggle the livelier movements of the Franck Violin Sonata or the Brahms Op. 40 Trio are for the pianist. Which is not to say that she was discreetly accompanying in any way, just that the tone was never forced - and we were sitting right at the front - and the musicality total. Jan and Frances expressed all the drama of the Franck to those in the audience who might have needed the visual aspect to convince them of the inner story; not that they would have realised the killer effort involved.

Roger's part in the proceedings chimed serendipitously with my visit to Jasper Rees's horn play the night before (see below). Roger told me Jasper had persuaded him to loan one of the horns which hung above the Hampstead stage. Poulenc's idiosyncratic Elegie was written for Dennis Brain, very much on my mind since his part in the play. And there was even deeper lament in the Adagio mesto of the Brahms Trio. I couldn't tell why it was affecting me so strangely, not least when horn and violin take up solo lines and the piano stays silent for a while; it was only afterwards that Andy drew my attention to the note which told us it was completed, like the German Requiem, in memory of the composer's mother. Frances told me afterwards that having an audience always changes the way she plays it - the elegy needs a sense of shared mourning.

All this sobriety shouldn't detract from the sheer joy of the occasion, the delight of some folk who'd never been to a chamber concert in their lives, the mulled wine and the mince pies. 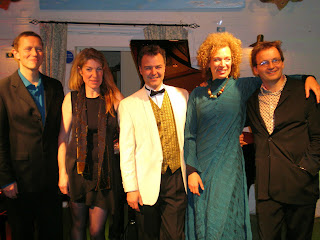 But after 24 hours in Norfolk, it was back to more seriousness with the last of the Southbank Schnittke concerts. I hadn't bargained for the challenge of involving the composer's widow Irina in the pre-performance event with an interpreter (two, in fact) present. That meant dialogue couldn't flow as freely as it might have done with just Vladimir Jurowski or Sasha Ivashkin, both of whom speak the most elegant English. But it was important to have the connection, the slight awkwardness melted away and I think everyone had their turn in making unusual and interesting points. Here's the distinguished troika afterwards. You'd never believe that in half an hour's time Vladimir and Sasha were to embark on one of the toughest concertos in the repertoire. The concert was sombre but focused and magnificent, difficult to write about without becoming unduly portentous, but I've tried in my latest Arts Desk review.

So that's our fill of Schnittke in what would have been his 75th birthday year, so zdravitsa with a glass of vodka. It seems apt to leave him plaintively awaiting an audience. He's certainly found one, made up of quite a few members of the younger generation, over the past fortnight. 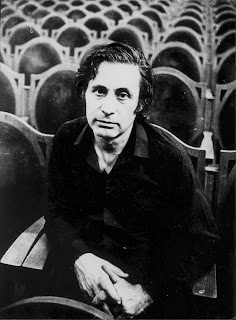