One wall is down, another grows 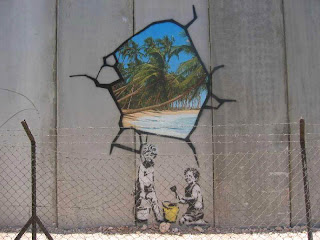 On this day of celebration for Berlin and the world, it might seem curmudgeonly to raise the indignities of another wall. I can only say that I came back from Jerusalem infinitely more pessimistic about the possibility of any steps forward in the middle east peace process, and infinitely angrier (forgive me, my good Israeli friends) about the denial of basic human rights to Palestinians. Rory, our host, reminded me of the words in Israel's 1948 Declaration of Independence, which all too often seem to have been forgotten:

The state of Israel....will be based on freedom, justice and peace as envisaged by the prophets of Israel; it will ensure complete equality of social and political rights to all its citizens irrespective of religion, race or sex.

Well, I know that Hamas and other extremists have made it very difficult. Many Palestinians, according to those who wish them nothing but the best, are truculent and resentful even with their helpers. But how do you justify a wall that cuts off a farmer's land from his home, a playground from its school? Why are the Palestinian villages so wretchedly poor and subject to loss of vital supplies, including water, at any time? Juliette drove us around one of them at dusk, overlooking part of the wall 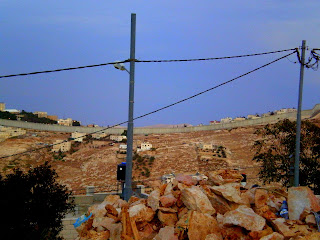 which is clearly visible from the Mount of Olives. 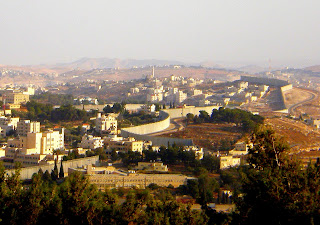 We didn't get to Bethlehem, where the wall is most obvious (it was a choice between that and Masada). So we didn't see the now-famous Banksy murals which play amusingly on freedom and repression. The most familiar image is of a child being floated aloft by a bunch of balloons. And Pavel Ryszawa put this photo on wikimedia, for which thanks. 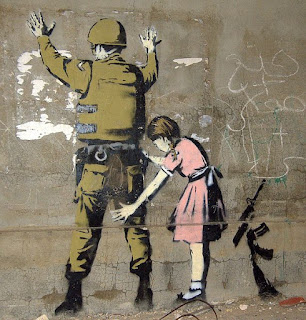 The nearest I got was this wall in Mane Yehuda. The meaning of Tenniel's White Rabbit is unclear to me - late for what? But it's certainly striking. 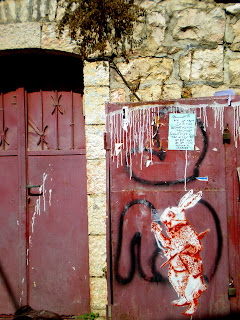 Walls and divisions confront you everywhere in Jerusalem. It's odd to think that you are regularly zigzagging a now invisible green line, a very different proposition to the one in Nicosia. Tellingly, the compound which lodged thousands of jammed-together Russian pilgrims in the 19th century now houses political prisoners. 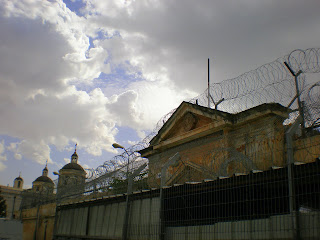 Of course we shouldn't forget the greatest justification of the state, represented by these walls of files in Yad Vashem's Hall of Names. 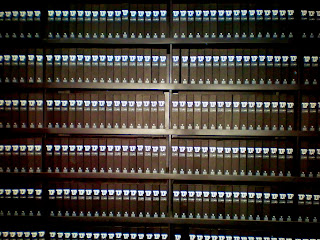 I'd like especially to remember my dear late friend Trude Winik, who in 1977 registered on the Pages of Testimony her mother Hedwig, brother Josef and sister Elisabeth, deported from Vienna to Minsk on 6 May 1942 and murdered in Treblinka.

I didn't see, in the two all-too-short hours we spent there, any record of the established zionists' harsh attitude to the Jews who flocked there after the liberation of the camps; apparently they looked down on them scornfully as 'soapies'. What the museum does splendidly celebrate, which takes one out of the morass so much misery might induce, is the triumph of the individual, both in the filmed stories of survivors - the Imperial War Museum is good on this too, as I discovered taking godson Alexander round when he was 11 - and the countless non-Jewish organisations and families who helped. Even in Poland, whose shocking percentage of deported Jews compared to every other country I'd never taken on board, a group achieved the salvation of thousands. And there was a splendid section on the Jewish men and women who joined the doughty Ukrainian and Russian partisans. One, incidentally, is the mother of a friend of our friends in Jerusalem. Since those years living in the forests, she refuses to go near a mushroom.

Anyway, the site is impressively designed, and no-one visiting Jerusalem should fail to devote as much time as possible to it. 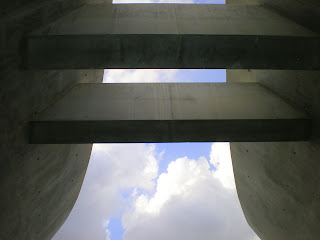 Now I'm off to Belgrave Square to see the melting wall of ice.
Posted by David at 11:45