Because nothing can live in it 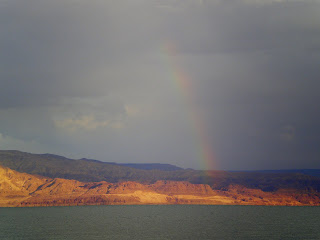 The Governess's succinct explanation in Britten's The Turn of the Screw, and her charge Flora's stilling, harp-flecked invocation of the Dead Sea which prompts it, ran over and over in my head as we plunged to the lowest point on earth. Any illusion that we were more or less alone in this wilderness was shattered as we entered the nearly-full underground car park at the Masada National Park headquarters. At first full sighting, though, the last stronghold of the Jewish army against the Romans in AD 73 remained impressive. 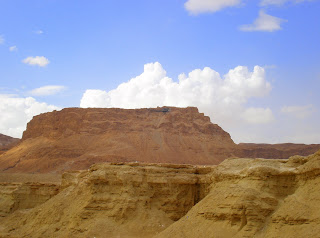 There are two approaches to this cliffhanger: from the west, where the Romans' siege ramp can still be clearly seen, and from the east. Having started on the wrong route, which gave us an unexpected glimpse of an ibex, we took the latter option, shunning the hordes waiting for the cable car and heading up Wadi Masada for the Snake Path. 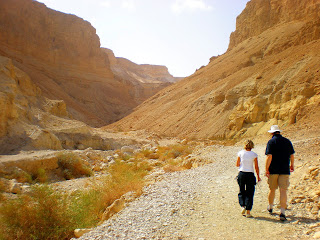 The path has its name, according to the historian Josephus's celebrated and romanticised account of the siege, 'because of its narrowness and constant windings; it is broken as it rounds the projecting cliffs and often turns back on itself, then lengthening out again a little at a time, manages to make some trifling advance. Walking along it is like balancing on a tight-rope. The least slip means death; for on either side yawns an abyss so terrifying that it could make the boldest tremble'*.

Well, I doubt if Josephus ever went to Masada, for even given the present securing, stepping and broadening of the path, it can't ever have been that scary and the ascent takes about three quarters of an hour. It does give spectacular views over the salt pans and the Dead Sea. 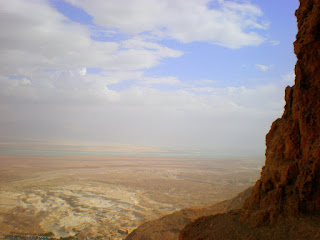 On the way up we encountered a large party of Israeli youth descending - nothing remarkable about that except that all, including the youngest who looked about 12, were carrying machine guns. Masada has entered the national mythology as the place where the inhabitants committed mass Waco-type suicide rather than surrender to slavery. In this it's thought that Josephus embroidered for the sake of a cracking good rhetorical speech, but like so much else in the distant past, it's now taken as the solemn truth and the oath of allegiance is frequently sworn at the top.

Whatever the historical reality, Herod's palace and fortifications on the top are mighty impressive. 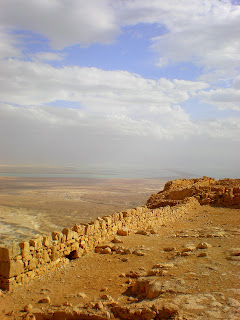 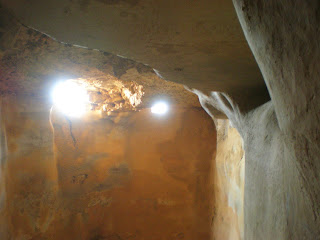 while the western palace has a couple of colourful mosaics. 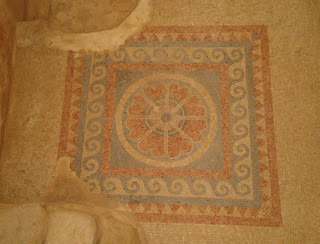 There's also a columbarium for the pigeons which kept Herod's folk well fed. Nowadays one still sees the occasional pigeon, but the most vocal and fearless inhabitants are these birds, some kind of starling but with an attractive orange stripe to mark them apart as a special desert breed. 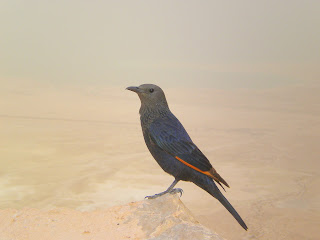 It was bucketing in Jerusalem and Tel Aviv; we had instead a dramatic dust storm. So the views on the descent were even more dramatic 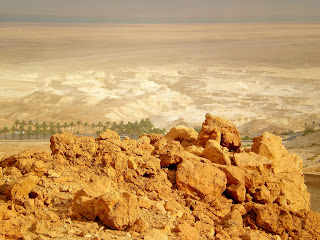 with the distant salt pans glowing in shafts of sunlight against the black. 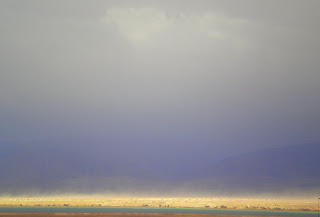 A dip in the Dead Sea after this proved irresistible. We drove past En Gedi, which hostess Juliette assures me is like a Black Sea resort in the communist era, and on to a still surprisingly busy Mineral Beach. Couldn't get near the mud bath for raucous Americans 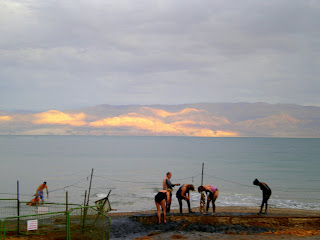 but floated somewhat uneasily in the lethal cocktail (no swimming or splashing permitted). It's not a new sensation for me - I'd also bobbed in the soapy waters of Lake Van - and J paraphrased Dr Johnson by declaring 'worth doing, but not worth going to do'. Masada, however, was a different story. The desert scene haunts me still.

*Thanks to Shari Greenberg for so generously presenting me with the Penguin Classics translation on our last day in Jerusalem.
Posted by David at 10:33

Wonderful photos David. You have whetted my appetite for a trip.

And you mine for Toledo, Gavin.

Of course the West Bank is one of the few places left in the world where you can really see a dividing wall, more's the pity - and what a wall.

Assume you made it to the 12-Star Gallery for those wonderful photographs?