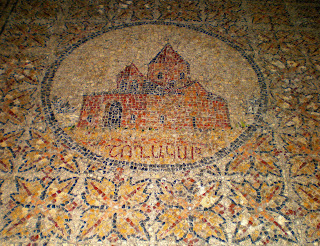 In Jerusalem's 'collection of alienated islands', as my current literary hero Amos Elon describes it, the Armenian Quarter seems most at peace with itself, and inhabited by folk who have tried to be as co-operative with Israelis and Palestinians as possible. Of course that's not always easy to maintain. Recently a couple of ultra-Orthodox boys spat at two Armenians in the street. The response to this apparently unprovoked insult was a punch in the head, and the immediate consequence threatened deportation for the Armenians. Their church rallied the other Christian communities in Jerusalem to threaten non-co-operation if the deportation went ahead, and a crisis was averted.

Not that the Armenians are any more immune to the daftness of sectarianism than any of their rival religions. In the apartheid supermarket that is the Church of the Holy Sepulchre, they once literally kicked out a Greek Orthodox Christian from one of their services. And you see this ladder? 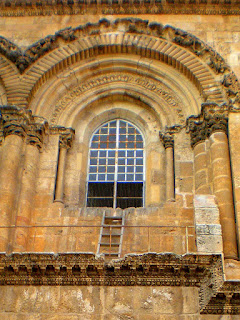 This is no ordinary ladder (I feel like the father in Bergman's Fanny and Alexander, weaving a fantasy about a bedroom stool to the awestruck children). One tale has it that the Armenians used it to grab a breath of fresh air at a time when all re-entries were taxed by the Ottomans. The ledge, though, is claimed by the Greek Orthodox. So the ladder can't be removed until the dispute is solved - which presumably will be (like so much else in Jerusalem) never.

Even so, the Armenian Chapel of St Helena with the fairly recent floor mosaic pictured above seems to me the most peaceful and spiritual part of the Holy Sepulchre bazaar. The walls on the staircase leading down to it are marked with hundreds of crosses made by medieval pilgrims. 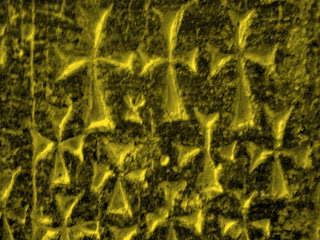 Decidely the most positive religious experience we had in Jerusalem was our twofold visit to the Cathedral of St James in the heart of the Armenian Quarter (which accounts for one sixth of the old city, housing a national population of no more than 1800). 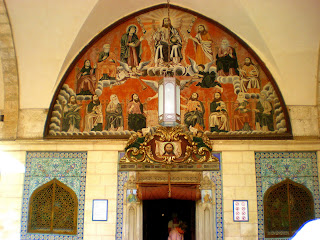 The public is only admitted first thing in the morning and at 3pm, when the service is held by a group of chanting, black-cowled monks. Calls to prayers are announced by beating on the wooden 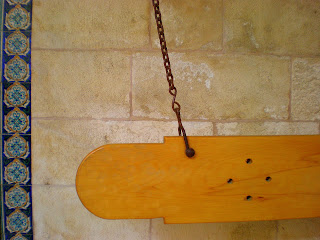 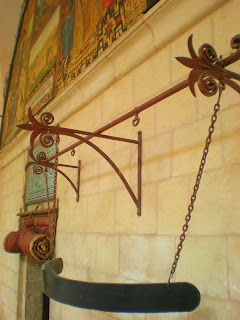 bars either side of the main entrance, dating from the time when no Christian bells were permitted to be sounded in Jerusalem. The rules mean what they say: a monk will come along and tap your legs if you've dared to cross them. 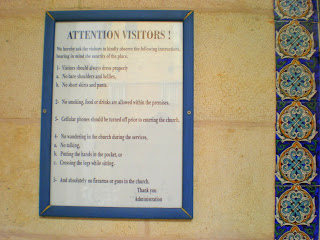 After the service, we joined a privileged tour of the quarter given by our hostess Juliette's good friend George Hindlian, an encyclopedia of information about Armenian life in Jerusalem. We got to see the curious tiles in the Chapel of Etchmindzin, dating from the early eighteenth century and fired, like the curious eggs above the lamps, in Kutafya, Turkey. 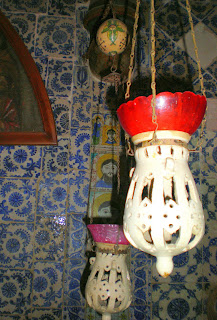 Here's Salome, dancing for John the Baptist's head in Turkish shoes (forgive the fuzziness, but I found no reproductions of this elsewhere). 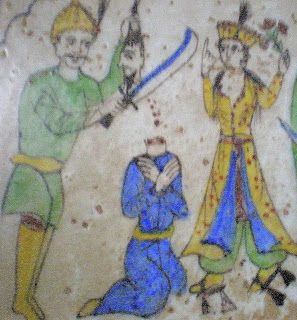 Then we walked around the convent behind St James's, encountering curious Armenian schoolchildren and a pair of young men, one of whom was explaining to the other that 'Sweden isn't close to Armenia' (the tour party was Swedish). 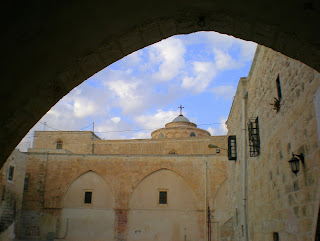 We saw one of those many flexible sites, the olive tree to which Christ was supposedly bound, but not, alas, the museum, which is currently under restoration. It contains the greatest collection of Armenian manuscripts outside Yerevan, and much about the infamous World War One massacre by the Turks which gave Hitler his cue (well explored in Michael Arlen's Passage to Ararat). I feel privileged to have seen the Armenian wonders of Akdamar, Ani and Isfahan - George, who has no official passport, would love to go.

Let's end my over-extended Jerusalem bulletins with the usual strange compound of religions. This is sunset at St Anne's Church just inside the Lions' Gate. Sitting by the ruins of Bethesda, all you hear at this hour is the Ivesian melee of muezzins chanting from the Muslim Quarter.

Again, a deceptive peace seems to reign over this meeting of religions. But you'd have to be a fool to believe in it. I close with more from Elon:

A few regard the profusion of denominations and sects in Jerusalem as merely eccentric or picturesque. Others insist that, taken together, they constitute the city's unique sense of place. That spirit might itself be called into question. Beyond the comforting, utopian generalisations that imagination, prejudice and vanity might set free, there are human beings living in the city - Jews, Moslems and Christians - ordinary people who, though diligent and forever on the alert, have often been crushed and plundered clean in the relentless intensity of local history. No-one really knows the full human and emotional cost of living in a violent house divided against itself. The price is surely high, but no-one knows the exact amount paid in terms of psychological entanglements, debilitating compensations and illusions.
Posted by David at 10:40

David, I love your comments about Jerusalem (a city I'd very much like to visit). The carved crosses in the wall were very moving, as well as your words about them. I felt that the calls to prayers reminded me of two things. First, it was almost a palimpsest in sound - layer upon layer of musical text, some faded and eroded, others more aurally legible - resounding in the cityscape. Second, and forgive a leap of untold centuries, cultures and religions, it did remind me of Gaelic psalm singing.