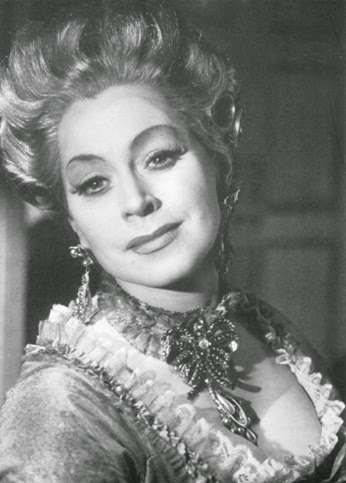 Very sad to learn that another of our greatest singing actresses, Elisabeth Soderstrom, has followed Behrens to the grave. She had more of an innings than I realised, reaching the relatively grand age of 82, and yet it seems like only yesterday I caught some of her later performances.

I came to Strauss's marital semi-comedy Intermezzo through hearing her termagent Christine Storch (aka Pauline Strauss) sung in English on Radio 3. I could only have been in my teens when I made a rather bewildered acquaintance of Strauss's parlando in the televised Glyndebourne Capriccio. I didn't understand it but I liked Soderstrom's charismatic glamour in the final scene. Now that the top YouTube clip has been deleted - 2/2014 - I had recourse to go back and look again, and here's a recording of (part of) the Final Scene I didn't know existed. The top commenter is right - there are no other performances I know with such intensity of feeling and meaning.


As I think I mentioned in extolling my hero, Neeme Jarvi, I got to hear him and the Gothenburg Symphony Orchestra for the first time purely through wanting to catch Soderstrom in Strauss's Four Last Songs. All I remember is that it was sabotaged by the jangling jewellery of the lady next to me, who left at the interval to let me enjoy Sibelius 2 and Part's Cantus to the Memory of Benjamin Britten in peace and awe.

Recitals? She promised her last at the Edinburgh Festival, veering towards musical comedy if I recall correctly (with Liza Lehmann's 'Fairies at the bottom of the garden' as one of the encores), and it didn't leave that much of an impression. But then she stepped in for - whom? no idea now - at the Wigmore, and her Musorgsky Nursery was utterly convincing, never archly childlike. Her famous anecdotal presentation of both concerts was charm itself.

We have her Janacek heroines to remember her by, but she wasn't around in the heyday of filmed opera, so apart from a Glyndebourne Fidelio, I don't think there's much to record her ineffable stage presence. My hope is that the stuffy old Strauss family can finally overcome its aversion to John Cox's setting Capriccio in the 1920s - after all, the Carsen version which has appeared is located at least a decade later - and then maybe the BBC filming could come out on DVD. Finally, I must search out a copy of Soderstrom's avowedly entertaining memoirs.

What would she have made of her fellow Swede Anna Larsson in red lingerie and fishnet tights as the tango-of-death Mephistophila in Schnittke's Faust take? She would have relished it, no doubt. The review of Wednesday's concert is here on The Arts Desk, as is my late-night report on The Tsarina's Slippers. You'll gather from it than not much has changed in pretty Ukrainian-village staging of Tchaikovsky's charmer since Maria Kuznetsova sang capricious heroine Oksana in the early 1900s. 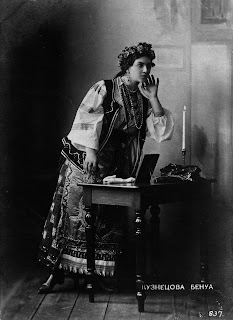 When she performed at Drottningholm before the court at the time of Queen Elizabeth's state visit, she reported that the court paid limited attention to the performance but continued their conversations. This is an example of the point often made but seldom witnessed, that in royal circles the customs of earlier generations persist when they have otherwise vanished from the general scene. Novels from the nineteenth century sometimes report that conversations were sometimes interrupted as the music hit a loud patch. Incidentally Drottningholm was unused for a century or so, and when reopened the only defect was that some ropes for the scenery were missing, as generations of young princes had cut them down for their sailing boats

As I'm sure a non-English speaker would in the case of Dame Eva Turner's speech. We heard a splendid one last night, recorded when she was 97 and introducting recordings from the 1920s. A trrrrremendous lady. More on her and her finest pupil, Linda Esther Gray, anon.