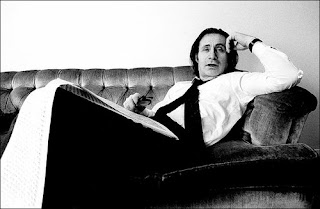 We could be in for a tough time. When Alfred Schnittke, Shostakovich's natural heir, moved away from the anything-goes 'polystylism' of his earlier works - balancing gritty contemporary music-drama, skewed quotations or stylisations of his famous predecessors and popular styles on a knife edge - and into the valley of the shadow of death, his works became more skeletal and austere. Whether or not a whole day of undiluted Schnittke, which is what Vladimir Jurowski's extraordinary festival offers us on Sunday, will work remains to be seen and heard. 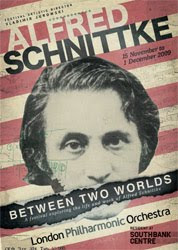 Don't miss a chance to hear at least a couple of the programmes to come: details here.

No doubt about it, though, Jurowski's decision to launch the 'Between Two Worlds' fortnight at the Royal College of Music last night was an electrifying coup. I've written all about it for The Arts Desk. Inevitably Prokofiev's Sixth Symphony licked the two Schnittke works in the first half, but then Schnittke hit back with an early masterpiece, the First Concerto Grosso. Jurowski generously tacked it on to the programme to give students a chance to be heard by their confreres before Sunday's performance. As Head of Performance Planning at the RCM Simon Channing said in his introduction, we were to think of what turned out to be a three-and-a-half hour event as akin to one of those Viennese marathons in which Beethoven (an invisible presence in this programme) participated.

I met Schnittke in 1993. The Gramophone interview is here (albeit in somewhat garbled autoform). My Russian then wasn't up to scratch, so Irina Brown came along to interpret. We both remember this as perhaps the most profound meeting we've had with a creative artist. He was very frail, but his statements were crystal-clear and rather forbidding, until a smile from time to time lit up his by then ascetic countenance.
Posted by David at 10:58

I comment on the post of Giselle at last years... about coreograph's... because all forget Ivanov as coreographer

Well, 'Senhori', I am flattered that someone has gone back that far into the archive.

Ivanov choreographed Nutcracker due to Petipa's indisposition, too, am I right?

This allows me to flag to all the magnificent arrival on DVD of the only time the Royal Ballet really did Sleeping Beauty proud - with those notorious but utterly brilliant Maria Bjornson set and costume designs. The concept within remains Petipa + Ashton (and it even has the Sapphire Fairy Variation, the dazzling one in 5/4 which has been cut in every other production I've ever seen).