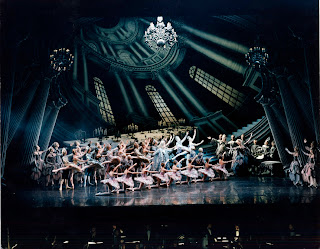 Oh, the mainstream ballet world: don't you despair of its innate conservatism, the genteel brides (and queens) of dance who cry horror at anything seen onstage which couldn't have appeared before 1950? Now that a DVD release has made revisiting the Royal Ballet's controversial Maria Bjornson-designed Sleeping Beauty of the early 1990s possible, it makes me very angry to see how little the dancers had to accommodate themselves to the allegedly treacherous sets, how absurd it was to claim that the mannerist pillars in the Prologue went against the angles of the company at the curtain in anything but a good way.

True, Aurora has to negotiate the steps on her entrance, preventing the ideal capricious flight. And the fairy-tale characters in the Third Act need to walk down them or sit on them. But all the essential dance takes place on a flat stage. And did the ballerinas not swoon at every little detail of their never-to-be-repeated costumes, every last sequin beautifully observed by the perfectionist Bjornson? 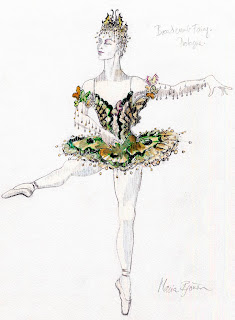 I'm glad the great lady, who died so pointlessly young, has an online website devoted to her art, the Maria Bjornson Archive. My thanks to its friendly guardians for allowing me to reproduce most of the pictures featured here, including the one for the Breadcrumb Fairy above. And my awed respect to a person I wish I'd met, as well as to Anthony Dowell who stood by her in his careful fusion of innovation with tradition.

I've only been given 40 words in a ballet DVD round-up for the BBC Music Magazine to comment on Opus Arte's third Royal Ballet Sleeping Beauty, so I take the opportunity to enlarge on it here. This is the only Sleeping Beauty I've seen to make the rare patches of action flame into life: the emergence of Carabosse's entourage from under the skewed banqueting table, the thorny forest that covers the castle, the winter panorama against which the Lilac Fairy and the Prince travel to their destination. 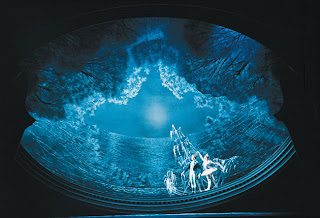 There's also more music here than we currently get in the painstaking but slightly frigid revival of the 1946 Messel-designed extravaganza. It's conducted on the DVD with surprising panache by Barry Wordsworth and what violin solos remain are superlatively taken by dashing Vashko Vassilev (though I was amused to hear the clarinet coming back in again with his Crystal Fountain variation when he should have had his eye on the coda of the Pas de Six. Groundhog Day?)

Anyway, the Act Three March is there in 1994, and this is the only time I've ever seen Tchaikovsky's brilliantly scored, modernist 5/4 variation for the Sapphire Fairy danced (the rhythm does, admittedly, make Petipa's classical tradition buckle). I'd still like to hear all one hundred bars of the 'sleep' entr'acte and, while the Wolf is there in Act Three 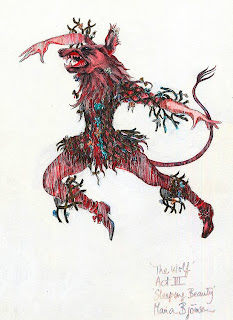 as splendidly adorned as Puss in Boots and the White Cat, Cinderella, her Prince and Hop O'My Thumb are deprived of their piquant numbers. I guess you can never have everything in a staged Beauty.

This one, in any case, is executed at the highest, aristocratic level the imperial style demands. It's a feast of exquisite dancing, from the fairy-tale variations of Deborah Bull, Leanne Benjamin and Errol Pickford among others equally good to the gorgeous picture-book Florimund of Zoltan Solymosi and the poetry incarnate of Viviana Durante's Aurora. Cojocaru, in the latest production, may be a more realistic teenager, but not a better ballerina. This is the Beauty to buy as a Christmas present for children, whether dance-mad or not. And adults will be spellbound by the visual extravaganza, as our guests of all ages were when we watched the Perrault divertissement on Sunday afternoon. 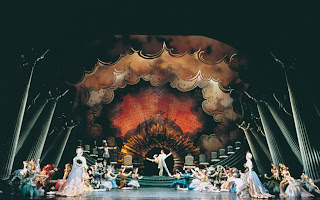 I can't tire of hearing those Act Three character-sketches in which Tchaikovsky's happiest genius reaches its high watermark. Jollity is a keynote in the early work the Royal Opera is calling The Tsarina's Slippers, opening tomorrow: so much rumbustious fun in the gopaks for Gogol's witch and devil, as well as plenty of slightly melancholy humanity for the lovesick smith Vakula and his capricious Oksana. I've enjoyed myself writing the historical and musical note for the programme, so I won't repeat myself here, but I will give you a taste of the picture book designs, which along with the choreography for the many dances will hopefully raise Francesca Zambello's production aloft. Here are two of Mikhail Mokrov's backcloths for the never-never Ukrainian village 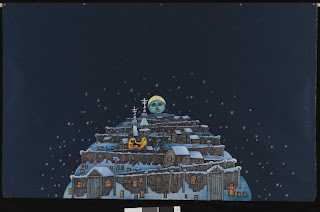 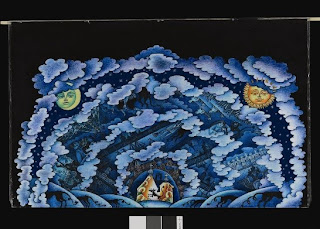 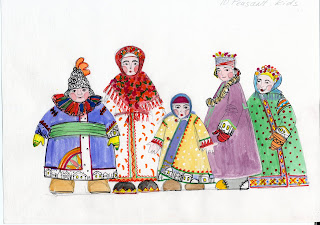 More designs here on The Arts Desk, with an accompanying interview by Ismene Brown.

I don't doubt that this will finally put Cherevichki, as Tchaikovsky called his lavish revision of Vakula the Smith, up there as a comedy to offset the greater lyrical depths of Eugene Onegin, Mazeppa and The Queen of Spades.

How wonderful to read this piece. Couldn't agree more about the Björnson/Dowell BEAUTY. You didn't mention the most staggering moment, of course, which was when the spider web bursts open at the kiss... with Zoltan Solymosi doling out the kisses, I'm hardly amazed things were rent in two. I am planning to sit down on Sunday afternoon and gorge.

I'm - blush - not sure I even noticed. But that may be because the camera was intent on close up and didn't catch the web-burst.

Crikey, Solymosi's handsome, isn't he? The other one to watch is Roberto Bolle in the Sylvia. You get your moneysworth there because he's Aminta and Thiago Soares is Orion.

Diaghilev would have been in seventh heaven.

Looking forward to Tsarina's Slippers but equally keen to see that Bjornson Sleeping Beauty again after what you've posted.

Lovely post, David! I'm looking forward to revising that Beauty now. Their current production looks sumptuous on the surface, but the drama & transformations have been cut so heavily that some wonderful music is missing and the story (as opposed to the dancing) can feel gallopy and sometimes perfunctory. Seeing Tsarina's Slippers, but not until the last performance!

Good to hear from you, Jessica - just been reading your intriguing interview with Louis Lortie (I'm meeting him on Tuesday after the concert - running between that and t'other, Leonskaja Chopin on Monday).

As I intimated, there are still a lot of cuts in this Beauty. I don't approve of the Prince dancing the Saraband in Act 2 - it's the wrong century for him! - and I DO wish we'd get more of the 'Sommeil' entr'acte, my favourite part of the ballet. Also, Vasko would have done a terrific job on the one preceding it, but you NEVER get that unless it's a gala.

This is an absolutely tiny world, I bought Florimund's jacket at the Royal Opera House's costume sale in 2002 and have worn it a few times to fancy dress parties. Tried to pick up some of my research on it just now and stumbled on this. Many thanks for this post! Took some photos for posterity, apologies from the alarming grouting.

Oh. marvellous! That's the most unexpected response yet. Love the jacket, never mind the tiles, thought you were talking about a 'grouting' dialogue I've been having with Ed Seckerson, but that, too must just be coincidence.

But I'm still none the wiser who muthacourage is, except that you like a weird animal magic website...

Oh I'm just someone with an interest in nice clothes, it's been funny learning about the controversy of Bjornson's production design and then reading your later vindication. Coming at it on the internet the argument gets squashed into the space of a flicked browser window. I don't know anything about ballet, but I wonder if Bjornson's then "vulgar" pomo pastiche is in fact the dominant aesthetic today, in ballet (where I'd have to defer to you) and more general cultural terms (which we can all see). And then how much does filming the production and framing the action by lens remove the domination of the set as originally reported? Well, it certainly goes down well in parties.

But then I'm not a serious balletomane myself. I did relish the aristocratic dancing then, though, and never thought it got lost.
You'll find Gavin Plumley (see above) feels the same.

poMo! no, unfortunately, I didn't catch this, but I'm looking forward to getting this DVD, it does look like a sumptuous production.

Well, you'll find your jacket very handsomely filled by Solymosi. But I must stop this ooh-erring over handsome primi uomi.

The Maria Bjornson website wants to know if it can provide a link to your designs. I said I was sure that was fine, but am asking you here anyway since we know no more about you...

What happened to The Maria Bjornson website? I have been trying to access it and get a line about it being restricted.

Sorry, Lisa, can't help you there. No contact with them since I wrote this piece - and as you see I'm all over the shop with music, books, ballet, places...