You who are girt with ice 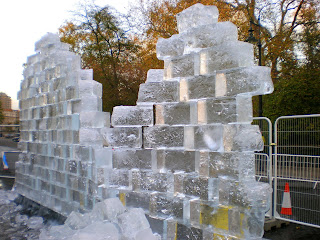 By strange serendipity, I was pedalling around town on my way to round off my six City Lit classes on Turandot, with Liu's final 'Tu che di gel sei cinta' very much on my mind. And here was the wall of ice melting away in Belgrave Square just outside the German ambassador's residence. I hereby copyright my own production of Turandot, which will feature exactly that - a wall of ice which steadily dissolves throughout the evening. Whether or not I'll set it in divided Berlin and include a Chinese restaurant remains to be seen. But I do think another wall will be ominously under construction as the impossible lovers celebrate their final victory. 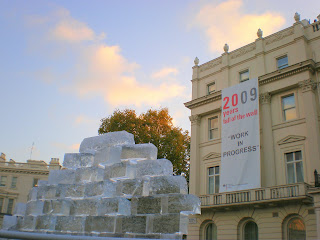 I imagined that most of this symbolic gesture would be mere water on the street by the time I was able to get there. But no, there on a helpfully chilly November day some of it still splendidly remained. A dead ringer for the irrepressible Fat Boy in The Pickwick Papers accosted his fellow cyclist: 'good, innit?' Somewhat surprised to be addressed, I rather patronisingly asked sonny if he knew what it was for. 'Well, I sees the German flag opposite and that notice, so I puts two and two together'. He'd come across it on the way to school, 'when there was lots more', and had come back specially. And he wanted to see what would be left tomorrow (that is, today). Rather more fun company, I think, than hanging around with diplomats earlier in the day. 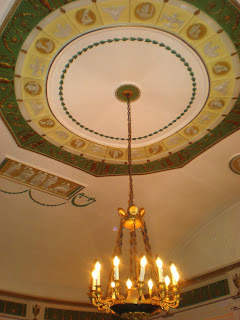 Diplomats were out in force for the Hungarian Cultural Centre's 10th anniversary celebrations the previous evening. Elbows every side of me entering the beautiful room at the back of the Vaudeville Theatre in Covent Garden reminded me of the saying that if you go through a revolving door in front of a Hungarian, the Hungarian will always come out first.

And, golly, had they pulled a star. Tamas Vasary at 76 is still very much a live wire. Who needs the frosty objectivity of a Brendel when a player like this can whirl you through Schubert's 'Wanderer' Fantasy and make exhilarating sense of it all? He always likes to talk, apparently, and most of us were more than happy to listen to his animated discourse 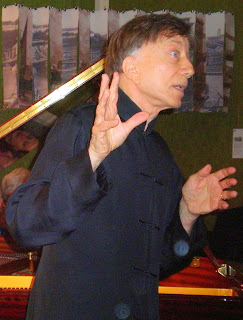 especially since he would zoom to the piano with extraordinary abruptness and plunge straight into the 'Moonlight', the 'Wanderer', two iridescent Debussy preludes and a dizzyingly authentic Kodaly Dances of Marosszek (did Hungary's second composer ever write a dull piece?) Vasary played for Kodaly, he told us, and all the master said at the end was 'Servus', as he shook his hand. Our Austrian friends felt sure this meant 'welcome, you're one of us'.

I thought it was gracious of him to play on a Broadwood piano with one very faulty A flat, and to curtail his talking and even, for heaven's sake, his second encore for the eating and drinking. The food came second to the company, so I'll do a quick Tatleresque photo run. Here on the right is Mrs. Vasary, the distinguished Hungarian ballerina Henriett Tunyogi, with the adorable director of the French Institute and EUNIC Chairman Laurence Auer. 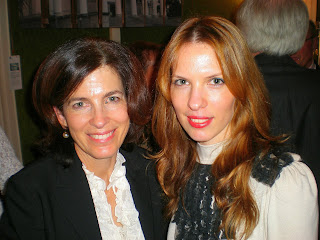 I see from an article by Jann Parry that Henriett has even danced to her husband's performance of the Beethoven 'Hammerklavier' Sonata. She's obviously first class, as leading dance critic Parry tells us. Now, here's vivacious Ildiko Takacs, the director of the HCC 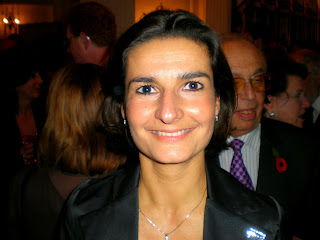 and last, but by no means least, those great impresarios Lilian and Victor Hochhauser flanking the lady who was instrumental in setting up the HCC ten years ago, former number one Hungarian newsreader Katalin Bogyay. 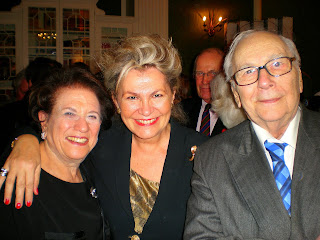 I was especially delighted to greet the Hochhausers as I'd seen their daughter Shari Greenberg only a week earlier in Jerusalem. Shari and I became friendly through e-correspondence over my articles for the Bolshoy and Mariinsky programmes (those editors who make a personable effort to show their approval are very few and far between). She and her husband David took us to a lecture-recital at the Jerusalem Music Centre delivered by son Yoel and his fellow members of the Carmel Quartet. Here are Yoel, violinists Rachel Ringelstein and Lia Raikhlin and cellist Tami Waterman. 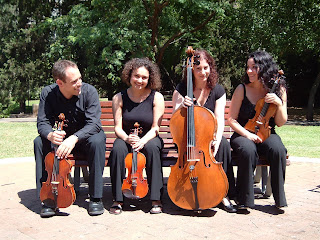 Yoel's narrative connected Mozart and Verdi through the once-thorny issue of opera versus chamber music. The spirited performances underlined beautifully how each composer comes up with a finale of total genius: arguably Mozart's best and quirkiest set of variations in the Allegretto non troppo of the D minor Quartet, K421, and Verdi's determination, in his less consistent quartet, to show what he can do technically as well as tunefully in his concluding Scherzo-Fuga. Yoel has just left with his family to live in the States, but will be back in Jerusalem with the Carmels for another pairing, of Haydn and Bartok, on 21 December.
Posted by David at 09:47

Sounds like a great evening. Is that quote about the revolving door from George Mikes's "How to Be an Alien"?

Should this hard-core Lieder nut, but one who has never heard the Hindemith/ Rilke Marienleben live, feel obliged to go to the Wigmore tonight....or risk never getting another opportunity?!

Could be: I'd have to ask my source.

Oh yes, yes, to Marienleben: it's a wonderful cycle. Hindemith is always much more moving than he's perceived to be. I'd go if I could but I have a quartet visiting my BBC students. Not a huge Soile fan for the quality of the voice, but she's a lovely and intelligent woman, and will surely do it justice. Not sure about her preferred pianist, though.

Thank you for persuading me to go, David.

I found it v easy to be captivated by both Isokoski's voice and intelligence.

Giving maybe one of the most complete/sympathetic portrayals of motherhood in Western music (discuss) , and a huge range of different moods, she was superb.

Occasionally the slight feeling with both - Isokoski singing from score , Viitasolo digging deep - that they were working at the music rather than really settling on it and really communicating it.

But that's a quibble. It was VERY good!

Thanks for that flavoursome precis, Sebastian. I was actually going to add a request that you reported back, but I didn't need to.

You turn me towards my old Roszlak recording of Marienleben with Glenn Gould. But before that I have to rediscover, or in some cases discover, Faure's late chamber music. Our quartet were minus one last night, due to family circumstances, but what they played us of his last quartet in tandem with recordings was revelatory (ie remove one voice and the whole harmonic texture changes).

And the slow movement of the Piano Quintet Op. 89 is marvellous, evanescent, unpredictable stuff.

Extraordinary pictures from the Ice Wall. Wish I could have seen it... but then, I guess its impermanence was the point.

Happy to send some more, Gavin, if you'd have any use for them.

oh jeeeez, I was supposed to go to that HCC birthday concert, but a family emergency intervened and I couldn't make it. It sounds as if I missed a truly wonderful evening - thanks so much for writing it up, David.

Well, Jessica, I've had my knuckles rapped by the diplo-mate for the slightest breath of criticism about the fact that Vasary was bound and gagged. But while I won't remove that, I must point out that after we left, so I gather, he played again by candlelight.

Lucky us and even luckier stragglers.

Oh, and PS, I hope the family emergency has resolved well enough and, of course, the Hungarian Dancer was the first person I expected to see there.

I found your blog by googling for "Vasary Debussy" or some such. I want to get my hands on a recording of the Debussy West Wind prelude he played at the Zeneakademia on November 5. Any ideas on how to get a recording or how to reach him? I can't find a commercial recording by him, and his performance was wonderful (got a big burst of applause and lots of bravos from the student gallery). You can reach me at bupemarco csiga yahoo dot com.

Yes, we had that one too. I'll try and contact the Hungarians for you. But I'm not sure that e-mail reads clearly: do you mean bupemarco.csiga@yahoo.com?

No, I meant the "csiga" to be the "at" sign (trying to foil spammers by not writing the address outright). Some Hungarians call the "at" sign a csiga (snail), which I think is cute. Thanks for following up for me.

You were way ahead of me there. My only Hungarian words are the usual - thanks, hello etc - and 'key' (courtesy of A kekszakallu herceg vara).