When we dead awaken... 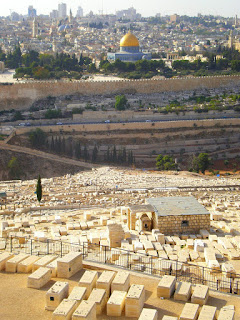 ...it'll be a mighty squeeze in the cleft which Zechariah prophesied will open up in Jerusalem's Mount of Olives. Which is why the Jewish graves are so hugger-mugger on the slopes, offering instant fast track to resurrection for Robert Maxwell, of all people, among others. If I've collated correctly, the city's glorious Dome of the Rock, never to be seen at close quarters by the majority of Israelis, will of course be swept away and the third temple at last re-established on the spot.

Unfortunately, it's not just the lunatic fringe which takes this literally - even if I doubt whether many Israelis share the ultra-orthodox interest in genetically engineering a red heifer without a single white hair as one prerequisite for the great day. Nor are many willing to wait on God's will. In the mid 1980s a group consisting of Knesset members, estate agents and lawyers calculated the placing of dynamite at each of the Dome's eight corner pillars. Arrested only just in time, they got off lightly for a plot which, if successful, would have triggered an Armageddon of regional if not global proportions; none of the organisers served more than four years in prison. One told the courts very matter of factly how the third temple would descend from the skies the minute the Dome was reduced to rubble.

Jerusalem is an always stimulating, sometimes oppressive place to be even for a week. As its finest poet, Yehuda Amichai, wrote,

The air over Jerusalem is saturated with prayers and dreams
like the air over industrial cities.
It's hard to breathe.

Paradoxically, I found myself breathing most freely on Temple Mount, Haram es-Sharif, the Muslims' 'noble sanctuary' and the site of the first and second Jewish temples which were razed to the ground, leaving only Herod's massive base. Against its western wall Israelis come to bewail the temples' destruction at their most sacred place. 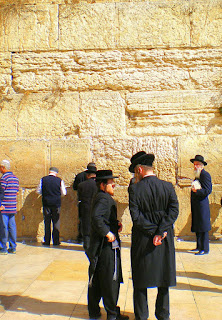 It was a bit of a fairground when we visited, sundry bar mitzvah ceremonies proceeding with much guying, dancing from the men and ululating and sweet-throwing from the women behind the barrier. 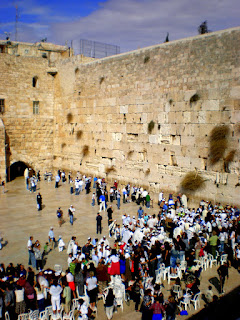 Having undergone one queue, we came out and joined another at the only one of the Haram's gates currently open to non-Muslims in the day's two brief windows of opportunity (we took the 12.30-1.30 slot). Security was especially tight owing to recent protests - in the midst of one of which a journalist friend of our hosts had her jaw broken by a stone - but once beyond the wooden ramp and the mercifully dormant riot shields 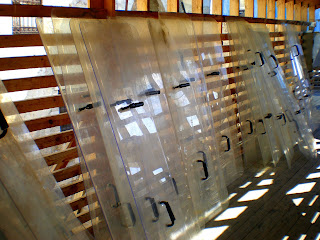 we did indeed seem to enter a kind of paradise in which the crowds quickly dispersed. The centrepiece is of course the late 7th century octagonal Dome, not a prayer hall - that function is served by the Al-Aqsa Mosque to the south - but a shrine to house the putative rock on which Abraham determined to sacrifice his son (Isaac in the Old Testament, Ishmael in the Koran). 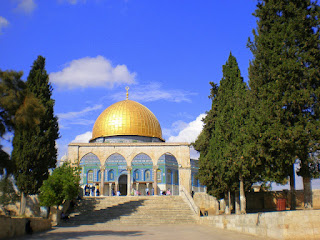 Its lower walls of white veined marble and upper tiers of glazed tiles, originally commissioned by Suleyman the Magnificent to replace the original mosaics, exist in perfect harmony with its perfect proportions beneath the dome itself, now of anodized aluminium rather than gold. 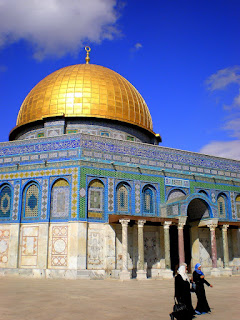 Yet what brings tears to the eyes is not so much the building, the interior of which is currently closed to non-Muslims, as its place at the heart of the most breathtakingly beautiful man-made terrace I've seen. For sheer spaciousness and light-filled splendour it even outstrips the centre of Isfahan and the Omayyad Mosque in Damascus. It's also in such marked contrast to the Crusader gloom of the Church of the Holy Sepulchre, though that offers weird fascinations of its own (of which more anon). Approached by eight flights of stairs surmounted by elegant archways or qanats, the sanctuary contains other more gem-like buildings, among them the Dome of the Spirits, 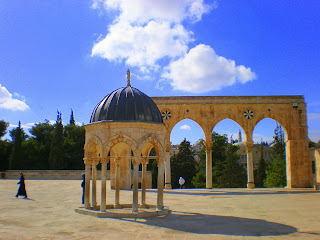 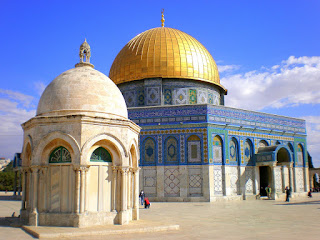 and the exquisitely decorated Dome of the Chain, its purpose unclear (though it may have been a small-scale prototype for the main building). 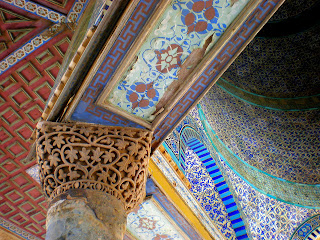 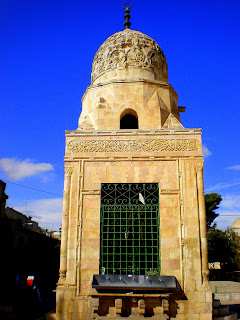 which we admired briefly before being summoned at deadline time, and ushered out into the bustle of the Old City.

So not for the first time I feel a bit like the protagonist of Henry James's The Princess Casamassima, wondering at the beauty of these great artistic creations but troubled by their genesis and their fragility under the present situation. The following morning I found myself boiling over with anger reading the description in Amos Elon's superb Jerusalem: City of Mirrors about the attempts to destroy such a masterpiece. But you could also see where that frustration came from; after all, events which happened centuries ago seem to be yesterday's grievances in Jerusalem. The simple fact is that no community here lives at peace with its neighbour. There are many more incredible stories and symbols of religious hairsplitting which I'll try and find time for. And I guess I'd better address the tricky question of Jerusalem today. But that's enough for now.
Posted by David at 09:43

Superb photos as ever, to complement your Norfolk churches! Keep up the good work.

These are splendid photos that reminded me of a great landscape by Edward Lear in the Ashmolean depicting Jerusalem from far off on a cloudy day and with the Dome clearly picked out.