Praising a fellow Russian music expert's work to the skies, and to his face, some years ago, I was disarmed when he retorted 'oh, licky, licky'. Can you believe me if I say that I only gush sincerely? In the present case, I'll admit that I might not have gone to see I Found My Horn at the Hampstead Theatre had it not been the brainchild of Jasper Rees, nominally a new boss (though we're not supposed to have such things in the democratic world of The Arts Desk). I'll also claim that if it hadn't been anything special, I wouldn't have felt obliged to write about the experience here; after all, recent minidisasters like the Jacques Brel Tribute (Diamanda Galas's part in it honourably excepted) and Ryan Wigglesworth conducting the BBC Symphony Orchestra have passed unremarked. 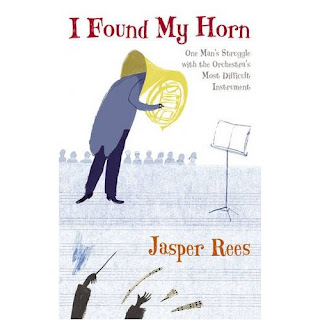 Jasper's book has been sitting on my shelves since a mutual friend gave it to me as a birthday present. I liked the photos, read the preface and realised this was clearly going to be a cut above Jilly Cooper's Appassionata or even other more real books on matters musical; but postponed it for a rainy day. The author, who talks about finishing, well, starting Ulysses, will appreciate my obligation to make at least some headway with Finnegans Wake and maybe re-read Proust first.

But here it was, presented on a plate in the form of a consummate one-man show directed by Harry Burton, with skilful lighting and excellent sound for the well-chosen horn snippets. Jonathan Guy Lewis made a sympathetic case not just for midlifecrisis Jasper and his determination to return to his unrequited love the horn, at which he was not very good as a boy (spot-on masterclass in school-orchestra Schubert 9), but also for doyens of the horn world Dave Lee, Hermann Baumann and Lowell Greer.

I laughed a lot, but I also had tears in my eyes when Jasper stands among young people listening to more young people play Sibelius's Fifth at the Proms (the great horn theme helps), and when Dave tells him to pull himself together and remember that Dennis Brain was seven years dead at his age. This touched a nerve with those of us approaching 50. Louis Lortie, whom I have yet to report on, has just turned the half-century and reminded me on Tuesday that he's already lived longer than nearly all the composers whose music he plays.

So, mortality and making something of yourself before it's too late, that stock of the feelgood movie, combine here. And the grand finale is superb, because Lewis CAN play the horn and re-enacts Rees's spiritual crisis as he faces the British Horn Society in Mozart's Third Concerto (photo, as above, by Alastair Muir).


The fact that he goes from being total crap to putting his heart and soul into it is theatrical licence, but of course you're rooting for him to succeed. As he does, on all levels. This show should run and run, but sadly it finishes at the Hampstead Theatre on Saturday. Here are Jasper, Jonathan and their capricious love object in front of Hampstead ghosts present and to come. 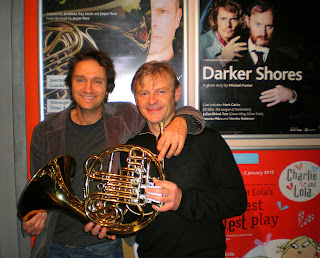 Oh, and about that Brel concert: I do feel I should have stuck up for the wacky Goth Diamanda, whose disgusting rendition of 'Amsterdam' was the only real highlight despite cries of sacrilege and horror. 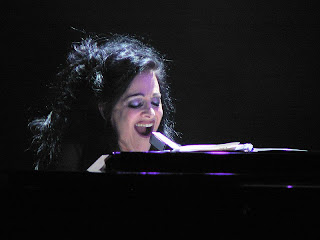 Beware artists with single names like Bono. I've already forgotten the nondescript Brit and the gravelly Flem who made unintelligible mush of Jacques's lyrics (which are in any case the only point as the music is ballad-simple). Good to see Marc Almond in chirpy form, but he was like a very slick end-of-pier-show host; and what was all the fuss about Camille O'Sullivan? She seemed rather amateurish and inexperienced to me.

Stop press: I've got to take the stage again tomorrow. Sasha Ivashkin didn't want to have to chair as well as to participate in the RFH pre-performance Schnittke talk with the composer's widow (and amazing pianist) Irina and Vladimir Jurowski. So with some trepidation I've agreed to take it on. Don't miss the last concert in a challenging series.
Posted by David at 10:59

"I found my horn" brought back with great vividness lovely memories of Flanders and Swann! Thank you, for both the interesting post and the memories.

Yes, Will, the F&S Mozart-revisited is a brilliant number. I'm sometimes put off retrospectives by the sort of people that insist of playing the collected works on a long drive, but that doesn't detract from their wit. Kit and Widow do a good job as a latter-day duo very much on their own terms.