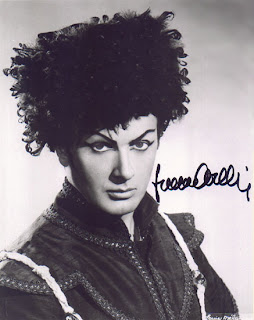 The accepted custom on the money note of 'Nessun dorma' is to hold on to that top B for as long as you can. Franco Corelli (poutingly gorgeous above, in his Calafian Astrakhan) does, of course, and in extending my Monday 'Opera in Focus' class survey to see and/or hear more on YouTube, I found Alessandro Valente clinging to it so long that he drops off what ought to be the full bar of top A on the final 'ro'. What Puccini asks for is an accent on a quaver's worth of B, while the orchestra makes a poco allargando, so that the stress falls where the word demands, on the last syllable.

Is this mere pedantry? Well, not exactly. Puccini tended to mark every detail in the score, so if he'd wanted the B to be so heroically held, he'd have put a tenuto above it. And as one of my students enthusiastically observed, 'vinceRO!' sounds so much more determined and, well, natural. She only had the opportunity to hear it because I finally found a tenor who does exactly what's in the score - Aureliano Pertile, who made his Scala debut in 1918 so could have sung at the Turandot premiere but didn't (I wonder why not, since he was Toscanini's favourite tenor. By the way, Caruso never could have sung 'Nessun dorma' for the simple reason that he'd been dead for five years by the time of the first performance). I take the liberty of liberating Aureliano's amiable image from the earlier Turandot entry to give him the palm here. 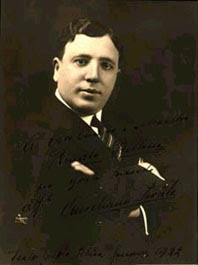 What of Pertile's 'Nessun dorma' as a whole? Well, he tends to sing sharp in his virile excitement - always better than flat, don't you think? - but there's never any doubt that he can make the killer lines, starting ''Ma il mio mistero e chiuso in me' and all around Es, F sharps and Gs, a hellish tessitura.

My resident heldentenor explained to me how lighter voices like Gigli and Bjorling have trouble with these phrases, and how even the heavier ones have to clamp down in order to get to the end without cracking. In the class, we heard Bjorling, heroic but uniformly forte, followed by Heppner as baby tenor, so sensitive to the atmosphere at the start but very careful with the killer passage. Then we moved on to Charles Kullmann, singing in German with no trouble at all at any point (the class's favourite; Charles Craig, whom I later dug out on an old LP, is almost as good). Pertile's what-Puccini-wanted demo came between splendid heroics on the top B from Joseph Schmidt - who sings 'vinhairo' to get it - Corelli and, of course, Pavarotti, who remains a golden example of how to deal with the passaggio.

Sadly, while he set a splendid stadium example, he gave rise to an outrageous band of pygmies either crooning at a lower pitch (Russell Watson) or wowing the crowds with a far from solid attempt at real tenorism (Paul Potts, whom I've only just watched - needless to say he dominates 'Nessun dorma' on YouTube). On the other hand, an old bird of boundless charisma can get away with replacing Pav and doing her own thing. Do stay with Aretha beyond the mangled Italian of the first phrases, and if you have an open mind you should enjoy her.

Let's end, though, with another tenor who was so much the real thing but tends to be overlooked because of his popular bent, Mario Lanza. This badly lip-synched extravaganza from the 1956 film Serenade, with flashbacks featuring the ladies in the drama, Joan Fontaine and Sara Montiel, sounds good to me, a bit more robust than the feted 1948 Hollywood Bowl version.

Having found out a little more about Serenade - not least that the gay character played by Vincent Price originally appeared in the novel as the singer's first love-interest - I'm curious to see the whole thing. Apparently the Otello Act 3 Monologue is a high point of Lanza's career.
Posted by David at 10:56

Blimey - Aretha doing her thing is quite a surprise. Love the riffs at the end.