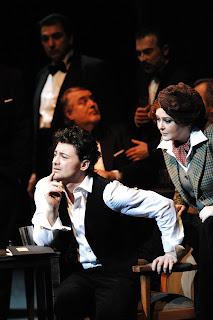 He usually does, owing to the labyrinth of plans and alternatives for Offenbach's problematic Venetian act. I count myself lucky to have heard the Kaye/Keck 2005 performing version live for the first time in Zurich last Thursday, and with three very fine singers (two of them, the Hoffmann of Vittorio Grigolo and Michelle Breedt's Nicklausse/Muse, pictured above by Suzanne Schwiertz, who also took the two Opernhaus Zurich photos below).

Yet the show was not what it might have been, owing to the kind of musical chairs I've only come across at the Met. The original director pulled out at an early stage, leaving house director Grischa Asagaroff to fill in the gaps; and then, following the final rehearsal, Elena Mosuc - whom it would have been quite a treat to see and hear as all four of Hoffmann's loves - developed a throat infection. Three ladies of varying abilities were flown in to plug the gaps.

More problematic than any of the above was the Zurich Opera debut of Tonhalle principal conductor David Zinman. We like his Mahler and adore some of his Strauss tone poems, but he showed not the slightest instinct for co-ordinating between pit and stage - did he once hold up his baton for the singers? - going his own way with often sluggish tempi that were the opposite of what this, of all works, needs: opera-comique buoyancy.

Under the circumstances, there was still much to enjoy. I've no idea what half the symbolism in Bernhard Kleber's sets was supposed to mean, but the stylish theatre-bar for the first scene looked good, and what went on behind the ugly sub-de-Chirico panels surrounding each tale could be interesting. The chorus, though, seemed under-directed both as stiff, unrowdy, tuxedoed 'students' in the Prologue and as the pallid, quite unsensual decadents of Giulietta's entourage. They came into their own in the a cappella musings and the magnificent Muse-led curtain which really should be the only possible ending to the opera.

Grigolo is a real stage animal, sexy and very expressive with his hands. A brilliant director might do much with him, but here he suggested none of Domingo's rivetingly portrayed decline from wide-eyed youth to shattered drunk. The voice has ping and elan, but he's essentially a lighter, Donizetti tenor and came under cruel pressure in 'Ah dieu, de quelle ivresse' and the shadow-duet. Dominating the stage in the right way was another singer with real sex-appeal, Laurent Naouri. A better four-in-one-villain I don't expect to see, and unlike Grigolo he never overdid it (except for a justified touch of humorous melodrama when Coppelius threatens 'je vais tuer quelqu'un'). 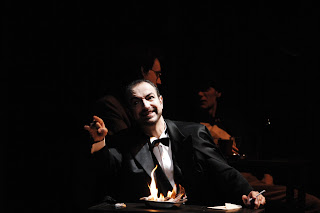 Of course he doesn't get the Diamond Aria we all know and love, a pinch from another Offenbach work, singing a weaker original to similar words, but Naouri, Grigolo and Breedt made the trio before the central Olympia shenanigans work well. Here are all three in the act's tragicomic denouement. 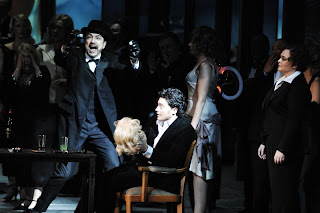 That trio is one of several rediscoveries which have to become fixtures of any 21st century Hoffmann. Most ravishing of all is Nicklausse's ode to music in the Antonia act. I fell in love with it on Garanca's arias disc, and if Breedt - a fine if unglammy Octavian and Composer - wasn't quite the match there, she acted almost as deftly as Naouri and shone in the final apotheosis.

The loves? Well, passons - or, rather, let me be brief. Sen Guo did the doll stuff perfectly mechanically, which was fine; Raffaela Angeletti, though with a none too attractive basic tone and a tendency to sing sharp, carried off some of Antonia's pathos; Riki Guy should never have been singing Giulietta - and in any case, what a dud is the reinstated finale. I still think we need the interpolated septet and a quick curtain, whatever an ailing Offenbach may originally have thought best.

Anyway, it was all an amiable curtain-raiser to the real jewels ahead: the Simon Bolivar Orchestra at the Lucerne Easter Festival with Abbado - a dream come true to so many of us - and then with Dudamel, and then in a family concert with the usual Latin American fiesta plums. I'll have more to say about those privileged hours on the Arts Desk, and - if there's time in the next chaotic few days - I'll add something here too. 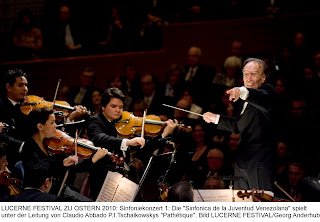 Suffice it to say that the upbeat and the plunge into Prokofiev's Scythian chaos made for the most exciting start to any concert, the throb of twelve double basses at the end of Tchaikovsky's Pathetique the most sobering of any conclusions. You'll get to see it, eventually, on DVD, and you'll be amazed: though I suppose nothing should surprise us from the man who is, for me, so many musicians and all the Venezuelans, the world's greatest living conductor.
Posted by David at 10:02

Try to see the Beecham Tales in the Powell & Pressburger film made about 1950. I bought it recently on DVD and it made me see again why I fell in live with Hoffmann back in about 1950 or 1951 when it was first shown here in Australia.

I have, several times, the last while I was taking my class through Hoffmann and really fell in love with it. The Olympia act with Shearer dancing is a miracle, less sure about the other two. Check back to Nov 2008:

Scorsese found it hugely influential, apparently. It made me turn back to The Red Shoes, but I still find that a stagey bore, I'm afraid. Then Colonel Blimp, which is pure genius from start to finish.