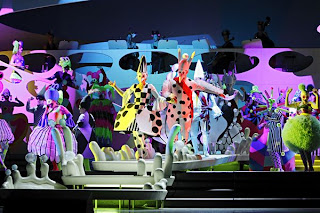 Until I had a closer look at it with my BBC Symphony class, I'd been sad at the prespect of missing Friday's Barbican concert performance of Peter Eotvos's operatic Angels in America. I did somehow doubt that Tony Kushner's seven-hour millennial work of genius could be distilled into two hours of singing featuring less than ten per cent of the text. And I was right - though the big set pieces could have had really inspired treatment. The jangling celestials of the portentous angel conjured up by much-drugged HIV-positive Prior Walter, the trips taken by neglected Mormon wife Harper Pitt, scenes of love and tenderness in hard times; all these might work in more inspired hands. What I guess I most resented in what I watched - a really rather awful Chatelet production - was the proportion of cop-out spoken dialogue delivered over minimal mood music.

The students, an open-minded and diverse bunch, confirmed my doubts last Tuesday. I only had to show them fifteen of the opera's best minutes and then a stretch of Mike Nichols's masterly movie for them to wonder what they'd let themselves in for and whether it mightn't be better to stay at home with the DVD. Don't get me wrong: I'm delighted that such a hard-hitting subject has made the operatic stage. But after you've had Meryl, Em, Al Pacino giving the performance of a lifetime, the wondrous Jeffrey Wright and an unbeatable team of young actors scouring your soul, the opera does seem third best, stuffing in as much of the plot as possible when it could have been something completely different.

All this, anyway, is just preliminary to relating what I did see on Friday night at the Finnish National Opera. The Finns I'd met told me to expect a serious new slant on Verdi's Ballo in maschera from all-rounder director Vilppu Kiljunen. The idea of a Berlusconiesque Italian reality-TV setting isn't necessarily bad in principle. But it turned out to be a bit of a muddle, with confusion over what's supposed to be private and public in the drama, and, worse, Kiljunen didn't get the cast I saw to relate to each other. The ball was fabulously, gaudily costumed, and the lady string quintet shone, but Kiljunen desparately needed the kind of movement co-ordinator/choreographer we take for granted in the UK.

The men, apart from the house Sam and Tom, were disappointing, and that includes the erratic conductor, Alberto Hold-Garrido. A useful but hardly poetic Riccardo, Giorgio Cascarri, simply stood and delivered, though at least all the top notes were totally secure; Hannu Niemala's Renato had the right Verdi-baritone colour but belted, rarely phrased.

It was worth seeing, though, for the revelation of Chilean mezzo Isabel Vera, one-time Cardiff finalist and born to play Ulrica, Amneris, Azucena and Eboli. 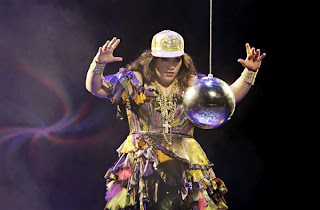 Also very much the real Verdian thing is our Claire Rutter. She was pretty good when I saw her as Amelia in Bieito's diminishing-returns shock Masked Ball at the Coli. Now she has an absolutely secure spinto technique, ringing top and artistry with melismas, messa di voces, you name it. She didn't look great in power suits, it has to be said, and like the other singers was more or less left to her own devices, but the rapturous ovation she richly deserved shows that this isn't the famed Britcentricity so derided by La Cieca on Parterre (and it was good to hear her singing in Italian). Wouldn't mind hearing her as Brunnhilde in due time. Here she is in the 'Truth Time' section of 'Il Nido d'amore' with Niemala's Renato: 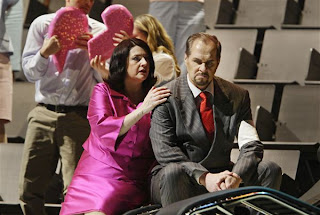 Anyway, the aria and duet in Act 2 caught fire, which was quite enough. And I'd already had my vision when charming press officer Heidi Almi took me to see a children's opera performed before parents and friends. I know from the Savonlinna premiere of Markus Fagerudd's Seven Dog Brothers how seriously Finns take these more-than-merely-educational projects. Auringonkukat (Sunflowers), composed by the prolific Atso Almila and led by repetiteur Kari Hänninen at the piano, used the life of Vincent Van Gogh to involve the children not just in some very hard to memorise, sometimes rhythmically complex choruses but also in issues around art and mental health. 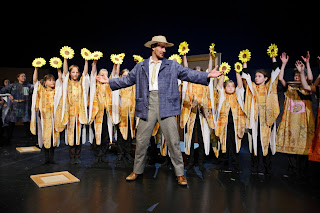 It was all very responsible, unpatronising and musically memorable. I couldn't understand much of the Finnish, to say the least, but I did grasp that the children dressed in capes with Van Gogh's night picture on them played not only disapproving forces of society but also Vincent's dark side, repeating a haunting ostinato as he sinks in to depression. The ending, too, was far from blandly celebratory. The three adult singers involved proved immensely sympathetic, though I reckoned the Vincent in the cast I saw, Ville Salonen, was probably a baritone rather than a tenor. Company member Olli Tuovinen, playing Theo Van Gogh, had one of those Finnish oaky voices we all know and admire so much - surely he'll make an excellent Renato in time. Here he is with the other Vincent, Tero Harjuniemi (also pictured above), and the kids. 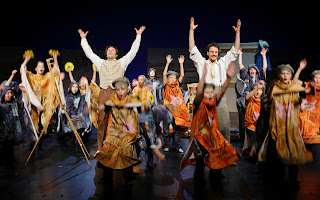 Finally, no visit to the Finnish Opera would be complete without an interval mustaherukkaleivos or blackcurrant pastry (if you think that's a mouthful - and of course it is, in reality - I reeled at a 27-letter Finnish word in the leader of a newspaper the man in front of me was reading on the plane. Which beats my favourite, the Russian for highly-qualified, which is viisokiqvalifikatsirovaniye). 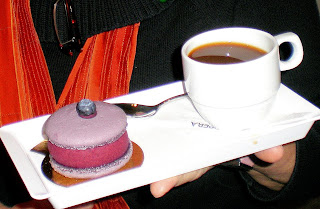 My good friend Anneli, holding one of these sinful creations above in the first interval of Ballo, says she can't find them outside the hallowed sanctum of the opera house. A weird Google translation tells me that the mustaherukkaleivos consists of 'mustaherukkainen cream pastry, which tastes like lemon humidification' with 'blackcurrent jelly cakes on the surface'. Never mind, it tastes wonderful.
Posted by David at 13:51

I adore the first part of Angels in America... but feel that the second part looses its way a little. You're quite right, though, that the Nichols TV version is pretty staggering.

You mean the play, I guess, not the opera, Gavin? I'm still hungry for feedback on it from more reliable sources than a certain astoundingly bland newspaper review.

I've not seen Perestroika in the theatre. The Nichols film holds its grip owing to the later stages of Ray Cohn's demise as portrayed by Pacino. And Em as the black harpy-angel (who can forget the Meryl-Em passionate clinch?) Plus the reassuring fact that our hero doesn't have to die.

And looks wonderful! Oh that I could.

I know I haven't been commenting but I have been enjoying your Northern Tales.