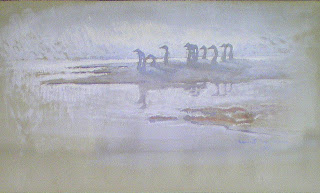 This atmospheric gouache on paper by Lennart Segerstrale hangs above the entrance to the Ainola dining room. It has a special meaning for curator Hilkka Helminen, who always watches out for the migrating swans flying south in the autumn and back to the lake near Jarvenpaa in the spring; in fact several of her neighbours had reported isolated sightings, but in the protracted winter those had up to now been few and far between. One recent development has been that the migratory paths are now almost exclusively over Finland, and not Russia, because the fields lie fallow there. 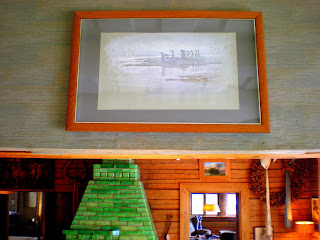 That the swans, and the singing variety especially (the laulujoutsen), were of profound significance for Sibelius can be heard in his music and read in his diaries. There are two crucial entries as he worked on the Fifth Symphony in April 1915:

[21 April] Just before ten-to-eleven saw sixteen swans. One of the greatest experiences in life. Oh God, what beauty: they circled over me for a long time. Disappeared into the hazy sun like a silver ribbon, which glittered from time to time. Their cries were of the same woodwind timbre as the cranes but without any tremolo. The swans are closer to trumpets, though there is an element of the sarrusophone. A low suppressed memory of a small child's cry [probably a reference to his daughter Kirsti, who died in infancy]. Nature's mystery and life's melancholy. The Fifth Symphony's final theme.

[24 April] The swans are always in my thoughts and give life its lustre. It is curious that nothing in the whole world, be it art, literature or music, has anything like the same effect on me as these swans, cranes and wild geese. Their sound and their very being.

Hilkka reminded me that Einojuhani Rautavaara, a composer very much loved by her and many other Finns, incorporates recorded swansongs into the final movement of his Cantus Arcticus. The Italian posting on YouTube rather bizarrely calls it a 'concerto for birds', but I like it because of all the photos of swans in flight.

Back in the 90's I heard Mr. Roger Voisin, former Principal Trumpet of the Boston Symphony, tell of having visited there. He had checked in, and was walking around the grounds when a servant came and told him that the Master wanted to see him. They apparently knew some of the same people, and doubtless it was _QUITE_ a thrill for him to meet the great Composer.

Yes, JV, the collection of 78s and scores attests to his interest in others' music, Vaughan Williams especially, after the watershed. More on that in another entry.

From Robert McIntosh, architect
I forgot to mention that Kenneth Dover's autobiography is called MARGINAL COMMENT and you should get a copy on abebooks.com. How that book didn't attract a libel writ only God knows.
I notice that you are a graduate of Edinburgh University. While doing some research on a building in Edinburgh's Southside, I came across a fascinating collection of 136 photographs, gelatin prints, taken in 1929, of many buildings in that area, presumably to record them before demolition, an act of wanton vandalism that draws strong recriminations to this day, and not just from native Edinburgh folk. You will find this archive of photos on http//digital.nls.co.uk
Robert McIntosh
ps with regard to your, understandably protective responses to my demarche re your goddaughter, I will leave well alone until 2020. But I expect Evi will have been snapped up by then
R McIntosh

Glad I didn't scare you away, Robert. I'll check out those photos. I've been transferring some more recent archives, of my days in the Edinburgh University Theatre Company 30 years ago, online.

Glad these days buildings tend to get converted rather than destroyed - viz the transformation of the old Edinburgh Infirmary Baths into the wonderful Dovecot arts and crafts centre (which I commented on last summer).

Indeed Mr. Kennedy's book on VW attests to the fact that Sibelius heard his _Fifth_ _Symphony_, dedicated to him without permission, at least once. One wonders if that collection includes VW's famous recording of the _Fourth_ with the BBCSO.

No, it doesn't: the symphony in the record collection is the HMV Sixth, presented by the British Council. There are a couple of real oddities like Bantock's Fifine at the Fair. Most of the 78s are of Sibelius's own music, but several of VW's later symphonies feature in the score collection. As I wrote, I want to post a bit on this some time in the next couple of days.

_Fifine_ _At_ _The_ _Fair_, as recorded by Sir Thomas, was liked by Mr. Paul Hume, the late and famous critic of the _Washington_ _Post_.

A "swansong" is by usage not the song of a swan, for example when flying across the sky. It is the song a swan is supposed ( it is probably a myth) to sing when dying - hence by extension a last performance or activity by anyone.

Hence my breaking up of the two words. I do hope you're not going to become too tiresomely pedantic, Sir David.

Well I have been in Pedant's Corner in Private Eye three times....